I have a question about the structure of an LiH unit cell, and while this is related to a homework problem, it isn't the problem itself, I'm just looking for conceptual understanding. I've already found that there should be 4 Li+ ions and 4 H- ions in one unit cell. However, I am struggling with how they will be arranged. Because the number of LiH molecules is 4, I am fairly certain that the structure intended for this problem is face-centered cubic lattice. This is where my conflict begins. In my class we have had the face-centered cubic unit cell described as (for one element) an atom at each corner and an atom in each side. From this arrangement we get (1/8)*8 + (1/2)*6 = 4 atoms. Now, I've seen a description online of the face-centered cubic structure for NaCl as "We can think of this as chloride ions forming an FCC cell, with sodium ions located in the octahedral holes in the middle of the cell edges and in the center of the cell. The sodium and chloride ions touch each other along the cell edges. The unit cell contains four sodium ions and four chloride ions, giving the 1:1 stoichiometry required by the formula, NaCl" (Chemistry LibreTexts). For me this makes a certain amount of sense, because this would give 4 cations when you use the same counting principle as before. However, I've seen multiple diagrams online that contradict this, such as: https://images.app.goo.gl/CGAsc4xAJM39tMgi8. This seems to claim that the center image is the unit cell, and while it does have 4 of each ion "on" it, it does not seem to fulfill the same structure as the aforementioned unit cell suggestion. Is the problem here just that they are showing 1/8th of the full unit cell for simplicity? If not, I am even more confused.

Thank you for reading this extraordinarily long question for what could be a very simple answer! And please don't roast me too hard, I've never posted here before.

I looked and there are a lot of questions on the site about units cells, many of which are pertinent. However I couldn't find one that answers your question directly.

First there is no reason to guess that $\ce{LiH}$ has a FCC structuree. You can look that up, for instance in Wikipedia.

Second $\ce{LiH}$ doesn't really have molecules in the solid. Think of $\ce{LiH}$ as an empirical formula rather than a molecular formula. 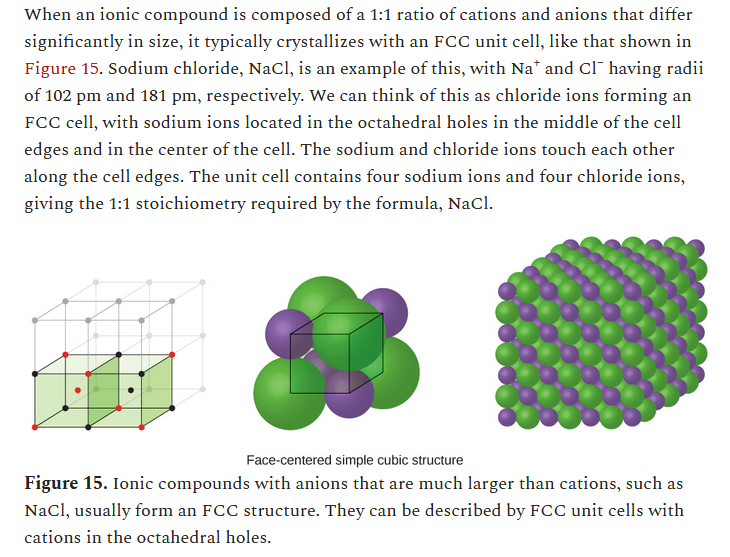 That is correct. The unit cell must have the correct stoichiometric ratio. However the section seems to imply that the middle drawing, as show below, is the proper unit cell. It isn't! 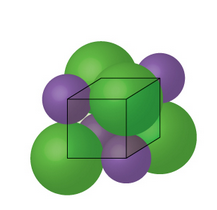 First realize that when looking at proper unit cells is that that the lattice points between which the edges are drawn are the nuclei, not points in space that would contain whole atoms. So consider the drawing below. For the cell as shown in the illustration, there are 8 corners with 1/8 atom each. Four corners are Na, and four are Cl. Thus the cell shown only has $\frac{1}{2}$ of a Na cation and $\frac{1}{2}$ of a Cl anion.

Now down the rabbit hole!

The proper unit cell for NaCl is shown below:

The reason is that the proper unit cell must also contain all the symmetry elements of the crystal. Look at the drawing below: 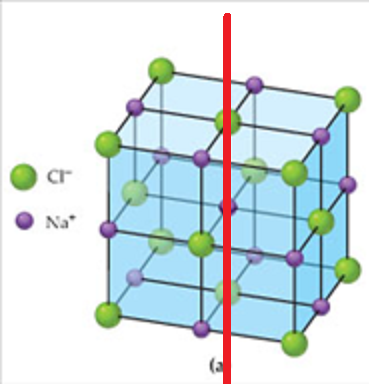 I won't get into all of how group theory applies to crystals and molecules, but the red line shows a four-fold rotation axis. In other words all the atoms are identical. You can rotate the crystal 90 degrees about the red axis and the sodium and chlorine atoms are in identical spots. The axis is a four-fold axis because you have to rotate 90 degrees four times to get the identical atoms back to their starting position.

Not the answer you're looking for? Browse other questions tagged crystal-structure ionic-compounds lattices or ask your own question.

11
Confusion in unit cells of crystal system
3
Hexagonal unit cells
3
Rock salt structure: chloride lattice or sodium lattice?
2
How to determine the edge length of the aluminium unit cell?
0
How can I find the smaller symmetric structure from big crystal unit cell?
1
Why rutile structure have primitive unit cell instead of body centered?
2
If a good choice of a unit cell should be the one of most symmetry ,then why keep body centered tetragonal if face centered cubic exists?
5
Why are there only 14 types of Bravais lattices and not 28 when there are 7 types of unit cells and each can have four variations?