I want to purify all primary amines containing compounds in a complex mixture (cell-extracted metabolites). I'm unaware of any published methods to do so. So I am thinking of making my own using a reversible Schiff base immobilization.

My input is a 1 mL metabolite extract that contains hundreds of compounds with a total molarity of ~1 mM. Of this ~50% contain a primary amine. Glyoxal agarose typically has 40–50 μmol aldehydes per mL, so capacity is not an issue. Impurities that I want to get rid of are, among others, organic acids like malate, pyruvate and succinate, sugars like glucose and glucose-phosphate, lipids and all non-volatile salts.

The idea is to use Schiff base chemistry:

An immobilized aldehyde is used to capture all compounds containing primary amines. A Schiff base is generally stabilized under high pH and destabilized at low pH. It can be further stabilized by dehydration to shift the equilibrium towards the Schiff base side. Therefore, I would add my input at pH = 10 in 95% MeOH, wash under dehydrated conditions e.g. using 100% MeOH, and elude at pH = 2 using 0.1 M aqueous formic acid. Alternatively, adding glycine in the elution buffer to compete off remaining amines. 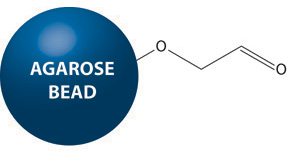 Let's take your questions one at a time.

Your end application is LC-MS. There are plenty of papers on amine-specific derivatization methods for metabolome analysis. For example, there is one by Zhao et al. [1]. Instead of purifying the primary amine metabolites and isolating the purified mixture as a separate step, they just rely on the analytical instrumentation to be able to identify primary amines from their derivatization pattern.

Alternately, as suggested in the comments by @Waylander, you could acidify the sample to form ammonium ions, and then pass the sample through a cation exchange column, where only positively charged ions will bind. As you noted, this will not be perfectly selective for primary amines, because species like quaternary ammonium salts etc. will also be retained.

You could combine the derivatization approach with the SCX approach, of course. If you chose a primary-amine-selective derivatization, you might get a selective method. At some point, however, the complexity of the method will become a drawback.

Well this question is impossible to answer for the unpublished case. I couldn't find any published methods in a quick search, which makes me suspect it is not the best approach to your problem. But I could be wrong of course!

Unanswerable without data. I suspect that secondary amines, at least some times, will also react with the aldehydes to form Schiff-base-like iminium cations, and may also be selected by your proposed method.

I think derivatization, without separation or isolation of the amines, would be an attractive direction for you to consider. The paper I linked, its references, and the papers that reference it might be good starting places.

Not the answer you're looking for? Browse other questions tagged organic-chemistry analytical-chemistry amines chromatography purification or ask your own question.