What does the phase diagram mean by "liquid" at NTP? (The liquid and vapor coexist even when the situation is not on the curve)

[Solved. For anyone who is also confused, see the comments under Poutnik's answer. As Poutnik reminds me, remember there is no air involved. I successfully picture that with the piston experiment in Karl's answer.]

When I read the phase diagram, I think it suggests that "at certain temperature and pressure, the phase of water would be (solid, liquid, gas) or two/three of them coexisting." But when I look up NTP on the diagram, it says "liquid", while the saturation pressure of water at 25°C is 0.03atm. So the situation can't exist since the vapor is going to condense until the pressure drops to 0.03atm.

Then what actually is the phase diagram suggesting by "liquid"? What am I missing here?

Edited: Poutnik reminds me that the pressure is the total pressure, not the vapor pressure. Then my question should be "If the vapor and liquid coexist not only at the curve, then what is the meaning of 'liquid' on the diagram?" 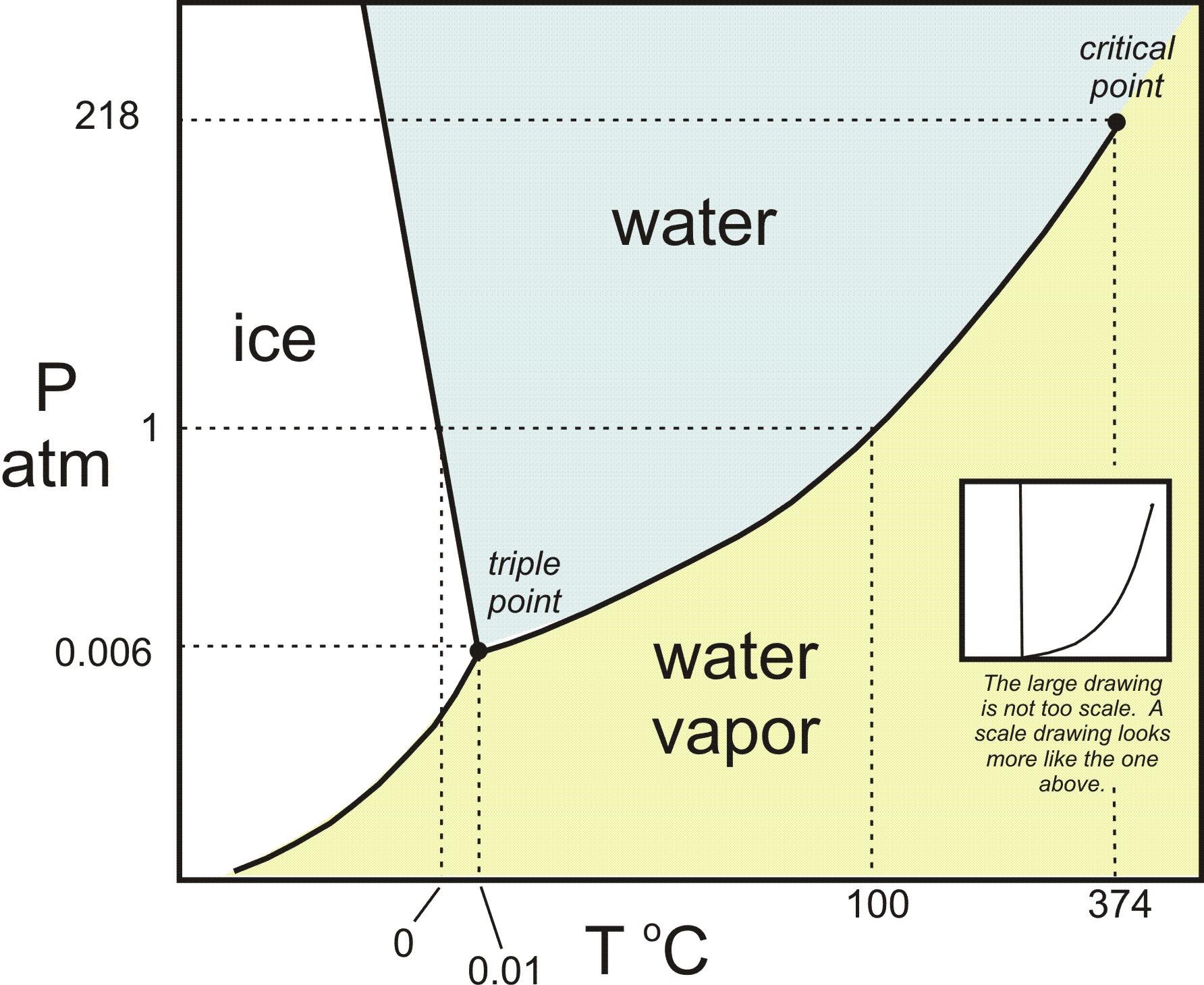 The phase equilibrium diagram is for a system consisting of just water.

The diagram pressure is the total system pressure.

It may be equal to the saturated vapor pressure, if no external pressure is imposed on the system.

Or, it can be ( much ) higher, if some external pressure higher than the saturated vapour pressure exists. In such a case all vapor is at equilibrium transformed to liquid or solid phase.

Imagine filling the e.g. water into a cylinder with a piston on top. No air inside.

Now the experiment is to control the temperature inside the cylinder, and move the piston to get the wanted pressure inside. If the pressure is above the vapour pressure, your cylinder is completely filled with liquid water, if it is below, all the water will be evaporated.

Of course you have to pull out the piston very far to make room for the complete phase transition. While you still have two phases in the cylinder, the equillibrium T/p value pair is always on one of the lines in your phase diagram.

3
What does the state of a substance at a specific T and P mean?

5
Boundary lines in phase diagrams and the lever rule
21
Why must both the critical temperature and pressure be exceeded to achieve the supercritical phase?
6
Clausius–Clapeyron relation for states of water and vapor
2
Is it possible to have only liquid in a closed container?
0
Why does a NOx container get cold when NOx is released? and What is the relationship of the vapor pressure curve with the liquid-vapor dome?
0
What is the mass fraction of trichloroethene in the liquid phase using vapour pressure and mole fraction in gas phase?
3
What does the state of a substance at a specific T and P mean?