This is the reaction that I'm interested in. I reckon this is what occurs: 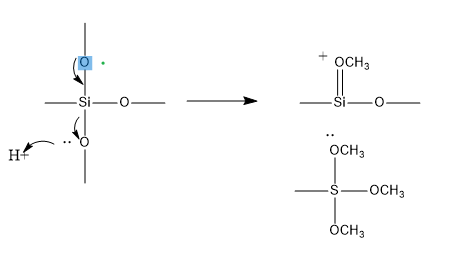 But how does the reaction proceed from there, there is a lone pair on the oxygen in right side of my picture, but how do you get rid of the CH3 group on that oxygen?

Although I do see a problem here that the structure of my final product was due to my aforementioned reaction scheme would still have RO-(PMS)-OR, where R is methyl group, instead of RO-(PMS)-R. I don't know what to do...

"Cationic polymerization can occur with the use of strong or Lewis protic acids. The mechanism of this reaction is yet unknown." https://www.ukessays.com/essays/chemistry/polysiloxanes-synthesis-structure-2201.php

Thereby, we are freed to speculate!

It is more likely that silicon goes pentacoordinate rather than tricoordinate. If a proton attaches to an oxygen on the siloxane, the silicon goes positive, which will attract an oxygen from: 1) a water, 2) a methanol, or 3) a methyltrimethoxy silane. The second and third options can only reform the original reactants. If water attaches after protonation, forming $\ce{H2O-Si-OHCH3}$, methanol could leave, followed by a proton from the water, to give $\ce{CH3Si(OCH3)2OH}$. This becomes a fourth attacking option. If this attacks the silicon of a protonated siloxane thru the $\ce{Si-OH}$ to give $\ce{CH3O(H+)-Si-OHSiCH3(OCH3)2}$, the pentacoordinated silicon can lose methanol, then lose the proton from the oxygen between the silicons, to form $\ce{CH3(OCH3)2Si-O-SiCH3(OCH3)2}$, and that's the first step, a dimer.

Because there are two more alkoxy groups on the silicons which can leave, more reactions can occur, and likely will produce a three-dimensional gel, or even a solid, if you cook it.

6
Determination of products in reactions involving carbocation rearrangement?
3
Preference of certain positions during chlorination of an alkene
3
Mechanism for the synthesis of 2-pyridone from pyridine N-oxide
4
Why does the E1cb mechanism proceed in the specific way it does?
1
Does the reaction of 2‐hydroxy‐6‐methyl‐5‐nitrocyclohepta‐2,4,6‐trien‐1‐one with NaOH involve ring contraction?
7
Is there any specific conditions for Neighbouring group participation?
3
Electrophilic Substitution of Substituted Benzene