How to decrease the percent of ammonia that is converted to the ammonium ion in water? [closed]

Ammonia is a weak base that reacts with water according to this equation:

Will Fe(NO3)3 decrease the percent of ammonia that is converted to the ammonium ion in water?

If ammonia gas is bubbled into pure water, the following reaction takes place:

How to decrease the percent of ammonia that is converted to the ammonium ion in water?

Le Chatelier's Principle indicates that adding $\ce{OH-}$ would push the equilibrium to the left.

I lifted the following figure from: 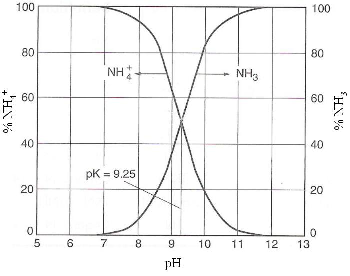 Since the OP asked only for the percent of $\ce{NH4+}$ to be reduced, there is another way. Dilute the solution.

Will $\ce{Fe(NO3)3}$ decrease the percent of ammonia that is converted to the ammonium ion in water?

Iron (III) forms an relatively insoluble hydroxide as shown by the following equation:

So again according to Le Chatelier's Principle removing $\ce{OH-}$ from reaction (1) favors the reaction moving to the right. Thus the precipitation of $\ce{Fe(OH)3}$ will increase the formation of $\ce{NH4+}$.

In neutral to basic conditions, this reaction undesirably [EDIT Correction] desirably moves to the right liberating ammonia, especially on warming.

Good news, in acidic conditions the NH4+ ion is hard to chemically attack. To quote a supporting source:

Acidic salts, such as AMMONIUM CHLORIDE, are generally soluble in water. The resulting solutions contain moderate concentrations of hydrogen ions and have pH's of less than 7.0. They react as acids to neutralize bases... They usually do not react as either oxidizing agents or reducing agents but such behavior is not impossible.

So, paths to lower pH, like adding CO2 or salts like Ferric nitrate that undergo a complex formation with water liberating H+. Also, Aluminum sulfate is commonly used to adjust pH and results in a helpful precipitation of Al(OH)3 to quote a source:

Freshly precipitated aluminium hydroxide forms gels, which are the basis for the application of aluminium salts as flocculants in water purification.

Here is a source: 'Ionization of Ammonia in Seawater: Effects of Temperature, pH, and Salinity' which may be of value. To quote from the abstract:

Previous studies have shown that the toxicity of ammonia to freshwater fishes depends on the ambient concentration of the un-ionized fraction (NH3) and have quantified the percent NH3 in solution as a function of temperature and pH. If NH3 is also toxic to marine fishes, the effect of salinity on the ionization of ammonia must also be considered. The percent NH3 over ranges of temperature, pH, and salinity common in seawater-culture situations is presented here.

In the water, ammonia can be found in its ionized (NH4+) or unionized form (NH3); the sum of the two is the total ammonia. Their proportion in the water depends on pH and temperature (Bower and Bidwell, 1978). Many studies confirm that non-ionized ammonia is chemically more toxic due to its ability to diffuse through cell membranes,...Studies show that at lower salinity levels, higher levels of ammonia nitrogen are measured...The reason for these differences should be at least partially, the solubility of ammonia, lower in water containing salt (Bower and Bidwell, 1978). Consistently, sea water (32-40‰) displays~20% less NH3 than in fresh water with pH 7.5-8.5 and at 25°C (Bower and Bidwell, 1978).

So, both increasing temperature and pH, increases free NH3 and seawater decreases free ammonia by roughly 20%. This agrees with a temperature vs. pH table on Page 3 of this available EPA report. To quote a comment relating to salt:

In saline or very hard waters there will be small but measurable decreases in the percent NH3.

Not the answer you're looking for? Browse other questions tagged acid-base equilibrium aqueous-solution ions or ask your own question.

1
How do I write out the chemical reaction of ammonia with strong acid?
3
Ammonium Hydroxide Name
0
Buffers: what does the strong base react with?
1
Is there a difference between ‘ammonium hydroxide’ and ‘aqueous ammonia’?
0
Does ammonium react with water in an ammonia solution?
1
Why ammonium hydroxide precipitates metal salts?
0
Ammonium chloride in aqueous solution
3
Can acid-base reactions occur in a non-aqueous medium?
2
Isn't water a Lewis base in the ammonia–water reaction?