Is this bond cleavage correct?

Is this bond cleavage of cyclopentadienone correct? 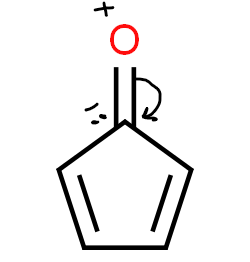 The ring becomes aromatic and stability "should" increase. But my book and data from experiments suggest that the molecule isn't that polar as it would have been from this cleavage. Why isn't this cleavage favorable? Doesn't aromaticity counter the appearance of a positive charge on oxygen?

The cleavage that you have shown is NOT favourable. The dipole of the carbon double bond O points towards the oxygen , not the carbon. The bond tends to shift onto the oxygen giving it a negative charge , while the carbon a positive charge. This, however is anti-aromatic so the molecule tends to do a Diels-Alder reaction with itself.

The bond will not cleave the way as you have mentioned . Just for the sake of aromaticity, a carbon double bond oxygen will not cleave in such a manner where the carbon contains the negative charge and the oxygen a positive charge. An oxygen with positive charge is extremely unstable(as it has a high electronegativity) and will show a strong inductive effect which will pull the electrons from the carbon(which is way less electronegative than oxygen) thus reverting to carbon double bond oxygen structure. Aromaticity can't be obtained as oxygen would just pull those elctrons from the carbon atom.

However let us consider the case of cyclopropanone. Here, the molecule becomes aromatic due to the shifting of the double bond onto the oxygen (oxygen gains a negative charge while carbon , positive).

3
Proper Resonance Structures
2
What is the reason for the acidic character in phenols?
14
What's the reaction type of the Hydrogen shift?
8
Why is the thione tautomeric form of 2-Mercaptopyridine favoured?
8
Which of these carbocations are more stable?
27
The order of aromaticity of benzene, thiophene, pyrrole, furan, and pyridine
5
Is an antiaromatic compound more stable than a non-aromatic compound because of more conjugation?
2
Can someone confirm and/or correct my logic regarding this mechanism?
6
How to compare the acidity of this multicyclic hydrocarbon to the acidity of cyclopentadiene?