When I was learning about the reactions of epoxides from my textbook, I came across the following mechanism for arene oxide-phenol rearrangement in the presence of acid:

In the above example, there is no substituents on the ring and hence the final product remains irrespective of which $\ce{C-O}$ bond in the arene oxide cleaves to open the ring. Later, the author presented the following reaction where the ring has an electron donating group - methyl group: 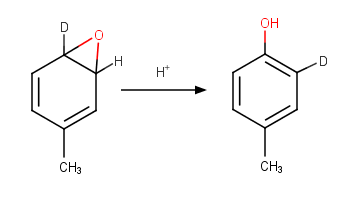 Here the final product depends on which of the two $\ce{C-O}$ bonds in the arene oxide is broken. Based on the general reaction mechanism provided by the textbook, I derived the following mechanism to form the product prescribed by the author:

Before writing the above mechanism, I first arrived at a different product by following the mechanism given below:

The reason I initially chose to cleave the left $\ce{C-O}$ bond in "Reaction Mechanism - 2" was, it gives rise to the carbocation 2(a) where the methyl group is at the para position. I've learnt that methyl group stabilizes a positive charge by hyperconjugation. Since, resonance effect is felt only at the ortho and para positions and not at the meta position, the carbocation 2(a) is more stable than 1(a) from "Reaction Mechanism - 1". Moreover, in the first mechanism, NIH shift involves a 1,2 Deuterium shift whereas in the second it's a 1,2 Hydrogen shift. I find a deuterium shift to be slightly energy expensive process due to its higher mass and stronger bond with carbon compared to a hydrogen shift.

The only reason why I think the first mechanism is better than the second is the product 1(b) is more stable than 2(b). But I don't understand why is the second reaction not preferred over the first even though it has two factors supporting (stability of 2(a) over 1(a) and hydrogen shift over deuterium shift) it.

I faced similar contradictory results while writing the mechanisms for the following reactions (from the same textbook):

What your book says is correct, and the issue arose due to your premature judgement of the intermediates' stability without actually working it out.

First of all, [1,2] Wagner-Meerwin shifts are intramolecular rearrangements which are primarily driven by thermodynamic concerns. Therefore, if their is a possibility of a reasonable cyclic transition state being formed, then the presence of the deuterium isotope hardly makes much of a change for the anionotropic shift, especially since the $\ce{C-D}$ is only marginally stronger than the $\ce{C-H}$ bond as stated here. So, if their is enough motivation for the rearrangement to occur, it can happen via either of the pathways.

Now, if you actually try drawing out the resonance structures of 1(a) and 2(a), you will actually find that the cation on the former will receive stabilisation by the +H effect, and not the second. The positive charge will only be able to align suitably for hyperconjugation in 1(a) as shown below: 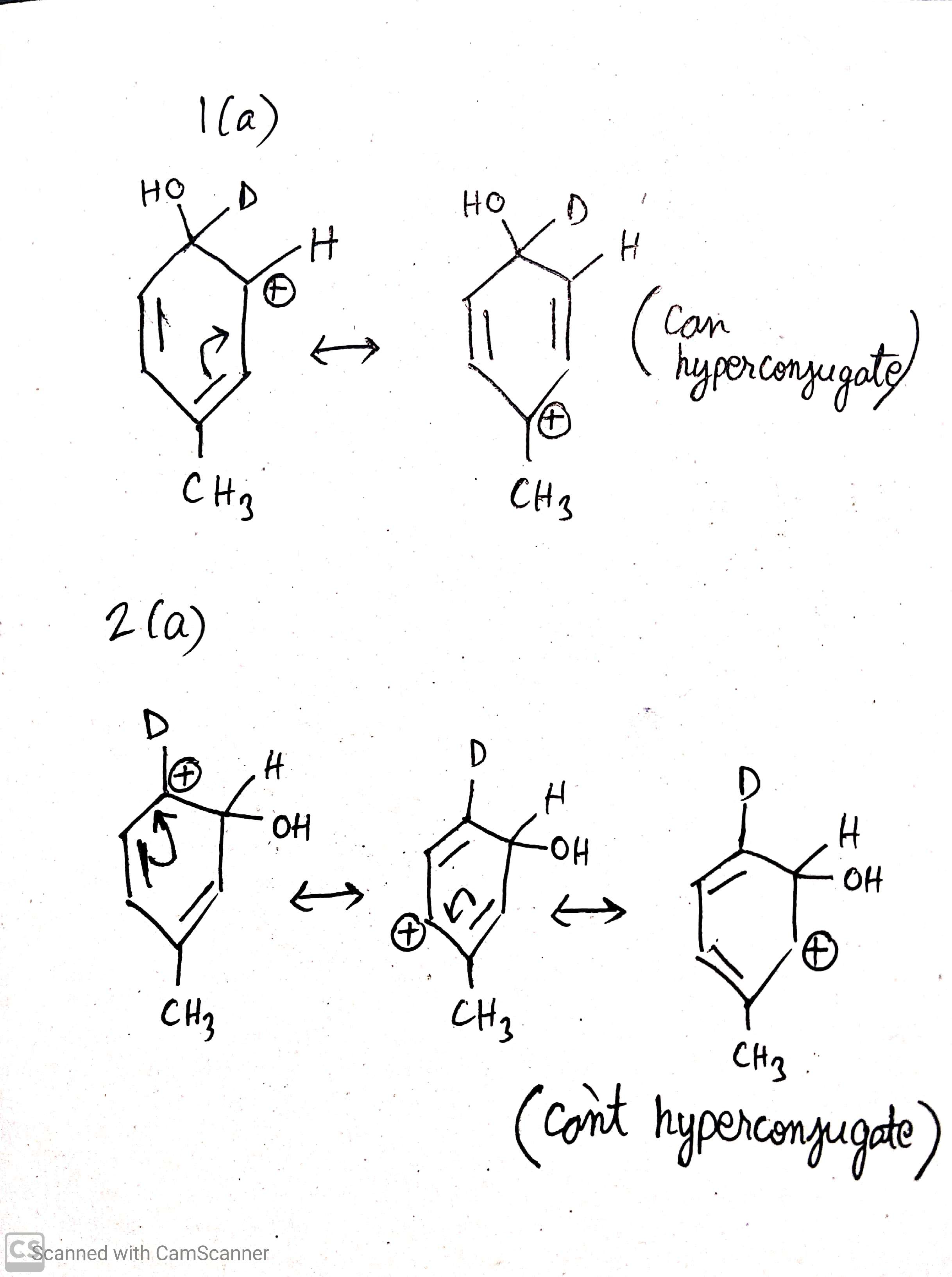 Hence, mechanism 1 should be the preferred pathway

I think the rule you are stating refers to the increment in electron density at the ortho and para positions of an aromatic ring by the virtue of a methyl substituent as shown below: 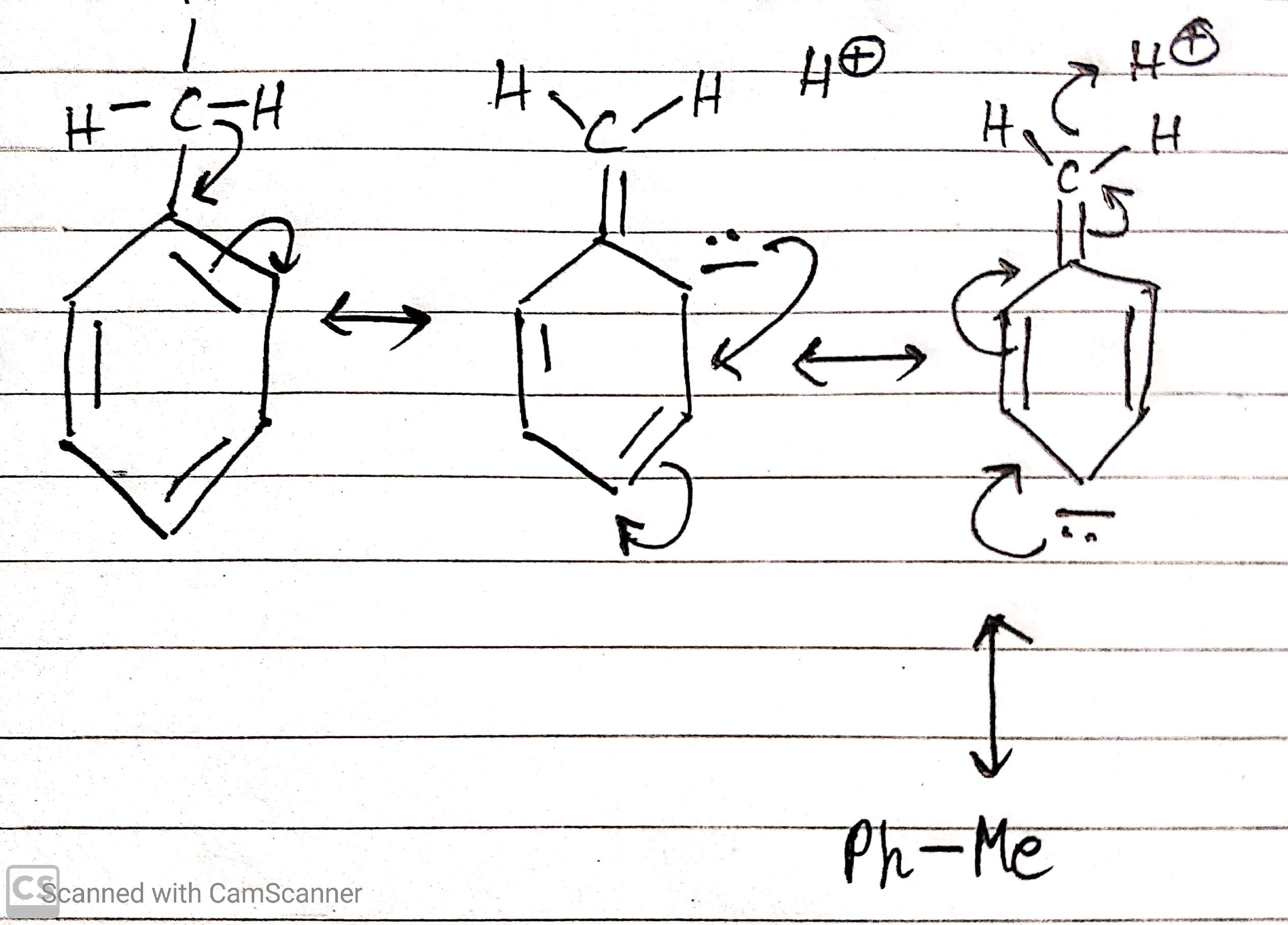 However, this thing is only valid when the methylation has been done at a completely aromatic ring and not at some broken fragment of the same.

Only when their is complete conjugation and the ring itself is aromatic does it even make sense to use ortho and para descriptors as per definition. When you are considering a part of the same with incomplete conjugation, then it's pretty much up to the bonding schematic of the current molecule to see where the positive charge is getting delocalised.

o-/p-/m- descriptors lose their value in such cases, and along with them, their delocalisation rules as well

I guess the OP had some confusion regarding the mechanism after the formation of these intermediates as well. The competition of each pathway occurs stepwise:

Note that as soon as the cleavage step occurred as described above, all considerations of Reaction Mechanism -2 and it's intermediates after 2(a) were rendered moot. 2(a) lost the stability battle against 1(a), and after that, none of the intermediates or products of Mechanism-2 would matter at all

Not the answer you're looking for? Browse other questions tagged organic-chemistry reaction-mechanism ethers or ask your own question.