Consider the following diagram for a binary liquid system comprised of A and B, where A is the more volatile component. 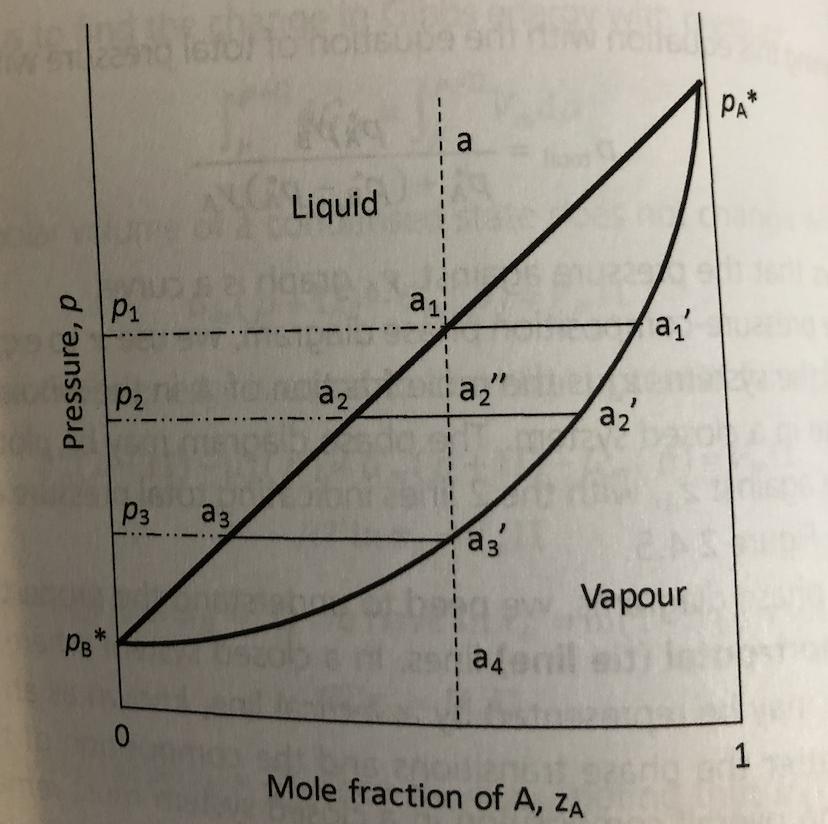 Consider an isopleth from $a$ to $a_4$. At the start, the solution is in pure liquid phase at state $a$.

I am slightly confused about we are able to make the pressure drop from $a_1$ to $a_3'$. My reasoning is: since the liquid and vapor are in equilibrium, shouldn't enough liquid keep on evaporating to maintain a constant vapor pressure?

Consider a system with a variable volume (e.g., a syringe, but on a larger scale). As the volume increases, liquid becomes vapor without changing the amount of material present.

In a system where there is only one component, changing the volume of the container will change the fraction of material in the vapor vs the amount of material in the liquid. But as you concluded, the vapor pressure will remain constant (assume constant temperature, since it was not mentioned), because there is an equilibrium between liquid and vapor for the one material in each phase.

However, when there are two components of different volatility, the vapor composition varies, depending on how much vapor there is, compared to the fraction left as liquid. So the equilibrium is no longer between a vapor and a liquid of the same composition.

It might be easier to visualize the change going on in the liquid/vapor if you change the dimension of the vertical axis to read 1/Volume. Then the vapor over the solution is (intuitively) richer in A, always (again, intuitively), until the liquid is all gone, when the vapor attains the original composition. Then, BTW, you realize that the pressure was changing while you changed the volume, and pressure might be a more relevant parameter.

Not the answer you're looking for? Browse other questions tagged physical-chemistry vapor-pressure or ask your own question.