Why does a bonding molecular orbtial increase stability? [duplicate]

When two atomic orbitals come together, they fuse to form a molecular orbital. There is a large probability that the electrons will spend time between the nuclei. This will reduce the nuclei - nuclei repulsion and hence increase stability.

The forces involved are electrostatic, nuclei repelling one another and electrons similarly, but also being attracted to the opposite nuclear charges. Also there is kinetic energy of the electrons (for simplicity we consider the nuclei to be stationary) which form the total energy of the molecule.

Some of these have classical counterparts and are Coulomb type integrals, but one type, the 'resonance' or 'exchange' integral, is purely quantum mechanical. It is difficult to describe in words but it expresses the possibility of the electron moving from the vicinity of one proton to that of the other. All these integrals are positive but add together according to the signs in the potential. The upshot of this is that the total energy reaches a (negative) minimum as the separation between nuclei is increased from a very small value, and becomes zero when the nuclei are well separated.

To find out which is most important the Virial Theorem (as result from classical mechanics) can be used. In the special case of a diatomic molecule the average kinetic energy is given by $\langle T\rangle=-E-R(dE/dR)$ and the potential energy $\langle V\rangle=2E+R(dE/dR)$ where $E$ is the total energy at $R$ the internuclear separation.

The plot below shows that it is the minimum in the potential energy that caused the chemical bond to be formed not the smaller minimum in the kinetic energy which is positive anyway. Thus in forming a bond the kinetic energy increases (destabilising) but the potential energy decreases by more and this stabilises the bond. This is shown below where $\rho$ is bond length in reduced units and $E_I$ is the ionisation energy. $E_0$ is the minimum total energy. 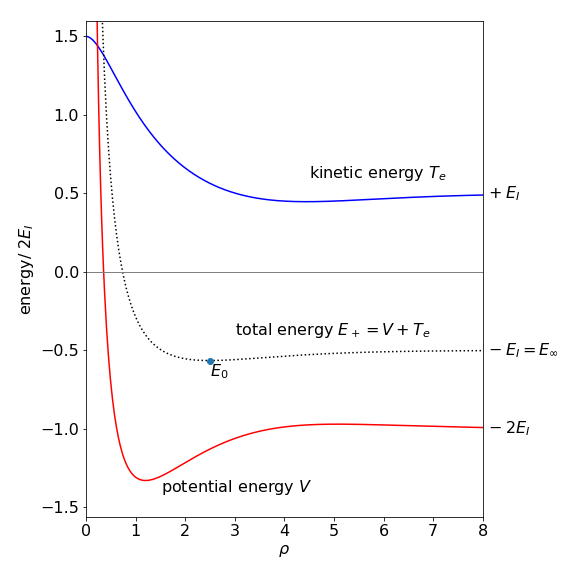