In free radical substitution of propane with halogens, how do you know which carbon ends up with an unpaired electron after fission of C-H bond? [duplicate]

In free radical substitution of propane with a halogen (eg- chlorine), how do you know which carbon out of the three ends up with an unpaired electron after fission of C-H bond?

This image shows methane, so there is only one possibility since there is only one carbon, but what about alkanes like propane with multiple carbons? How do we know which carbon atom ends up with the unpaired electron and why?

This is to do with the relative stabilities of the free radicals produced. Here is a schematic diagram showing the two possibilities for propene (similar mechanism, also with two free radical possibilities like propane):

As a general rule, the stability will be greatest in tertiary free radicals, then in secondary, and least stability in primary.

This is due to the inductive effect of carbons bonded to the carbon with the unpaired electron: 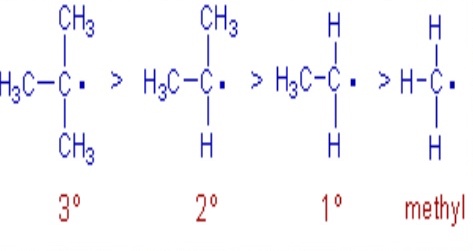 But in summary, both free radicals are formed, as seen in the first diagram. Both free radicals go onto generate products, but much more come from the more stable species. Therefore, in fact both carbons possible in propane end up with the unpaired electron, but the route involving the secondary free radical species is more successful and gives the major product. The route involving the primary intermediate gives a minor product.

In free radical substitution, a free radical is formed that is an electron deficient species and is stabilised by electron donating species bonded to atom on whose orbital it is present. So, electron donating groups that is +I ,+M increase chances of formation of free radical on it and presence of electron withdrawing species (-I,-M, Backbonding,by Cl) reduce chances. Hyperconjugation is also applicable here as this reaction satisfies its conditions, Carbon atom (sp3 hybridised)having atleast 1 Hydrogen atom directly bonded with carbon having a vacant p orbital or bonded with Carbon that is bonded with sp2 hybridised atom. Concept is that: Free radical or any chemical species forms where is most stable or follows the most stable path.

Not the answer you're looking for? Browse other questions tagged organic-chemistry reaction-mechanism radicals halogenation or ask your own question.

1
Why does radical chlorination and bromination of propane occur at different positions?

4
Why are tertiary alkyl halides obtained in higher yield than secondary or primary during free radical halogenation of alkanes?
2
What is the functional difference between a radical anion and a nucleophile?
2
Why won't ethene and ethyne react with halogens?
5
3-step process to make propyl ethanoate from propene
4
Can a free radical be created by chemical reaction of non-radical species?
15
Can we synthesize alcohols by the photolysis of hydrogen peroxide?
1
How does conversion of a free radical to a carbonyl compound take place? Unsure about mechanism
5
How would this reaction occur through free radical substitution?