I had a look at the JCPDS card of BiOCl and saw that there were very small peaks (such as 0.1 percent relative intensity) that I think wouldn't be observed in XRD pattern, they would just blend in with the noise, so I'd like to know how do they calculate the XRD peaks and know their relative intensities so well (this card referenced a 1935 paper).

short answer: The record is based on the old record by Bannister 1934 as first description of this phase . The fine intensity scaling 1:1000 on the record card is based on a more recent re-investigation.

Beside the point detector / Geiger counter technique mentioned in Jon Custer's comment -- still highly valuable in powder diffraction analysis -- a common method was to record the diffraction pattern on a photographic film.

In the case of powder samples, you used for example Guinier cameras:

with a stripe of a film placed in the inner of the housing. After the experiment, the film was developed; and the more diffraction intensity, the darker the band on the developed film. The following image depicts a simultaneous analysis of four samples:

In case of single crystals, one method was to place the oriented sample in front of a film, for example with a Buerger precession camera 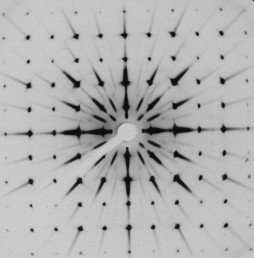 where the location of the spots provides information about symmetry distance relationships of the lattice. (Relative intensity of the spots equally has a meaning, but beyond the scope of this question here.)

In both cases, the intensity of the signals were attributed by eye (e.g., strong, medium, weak), or later by densitometry and densitometers in numbers. While these film methods today are superseeded in convenience by positional detectors and CCD arrays (no wet chemistry to develop the films, quick numeric read-out), you still find these noted in volume C of the International Tables of Crystallography, section 7.1 «Detectors for X-rays». 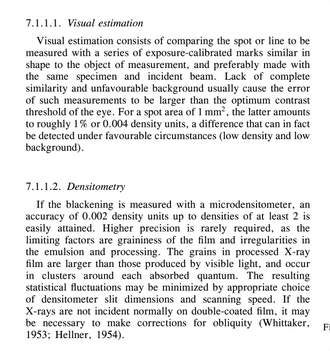 You find the first entry about $\ce{BiOCl}$ as entry #1011175 published 1934 in Nature, and #9011782 published 1935 in Mineralogical Magazine by the same author as indexed by the COD with their .cif files. You may use these to predict how a powder diffraction pattern of this phase should look like:

And indeed, there are some signals expected to be much weaker, than others, e.g., reflection $(103)$ (blue rectangle) would be weak and maybe not spot.

Interestingly, the AMS database equally offers access to the Bismoclite data, including a copy of Bannister's publication in Mineralogical Magazine, too (here). And table 2 (loc. cit.), based on the photographs and their visual readout lists only 16 entries. You find all of them in the subsequent re-investigation in 1983 (here, view text file next to download diffraction data), now with a total of observations equal to 37.

Thus, it is plausible the record card you accessed refers either to this set (1983) of data (or an even more recent study) to list $(h,k,l)$ and their diffraction intensities, but credits Bannister for the first description of the very same phase in the 1930s.

2
XRD-Shorter distance between planes than actual radius of atoms/or cell parameter
3
Elastic scattering of x rays in 3D: the principle for XRD analysis
11
How do you calculate a unit cell's dimensions from an XRD spectra?
1
Amorphous conductor transparent to XRD
1
Why are powder XRD axes sometimes plotted in reverse?
0
What is the origin of the Quadratic factor in calculation of XRD peaks?
1
XRD: Can stacking faults cause pseudo-centring?