I have seen similar questions, but I’m asking a new question as far as I know. Why is water instead of hydroxide ions used to balance oxygen atoms in redox half equations? asks about using hydroxide instead of water and that is closest.

If the solution is already an acid, there is an abundance of $\ce{H+}$ and it makes sense to me that a reaction may use excess $\ce{H+}$ to make the solution more neutral. One could make the same argument about using up excess $\ce{OH-}$ in a basic solution. What doesn’t make sense to me is adding to the basic or acidic nature. See example below which was specified to be in a basic solution. It appears to be making the solution more basic by producing more $\ce{OH-}$ instead of using it up. Shouldn’t that be less likely to occur? Why not? What am I missing? 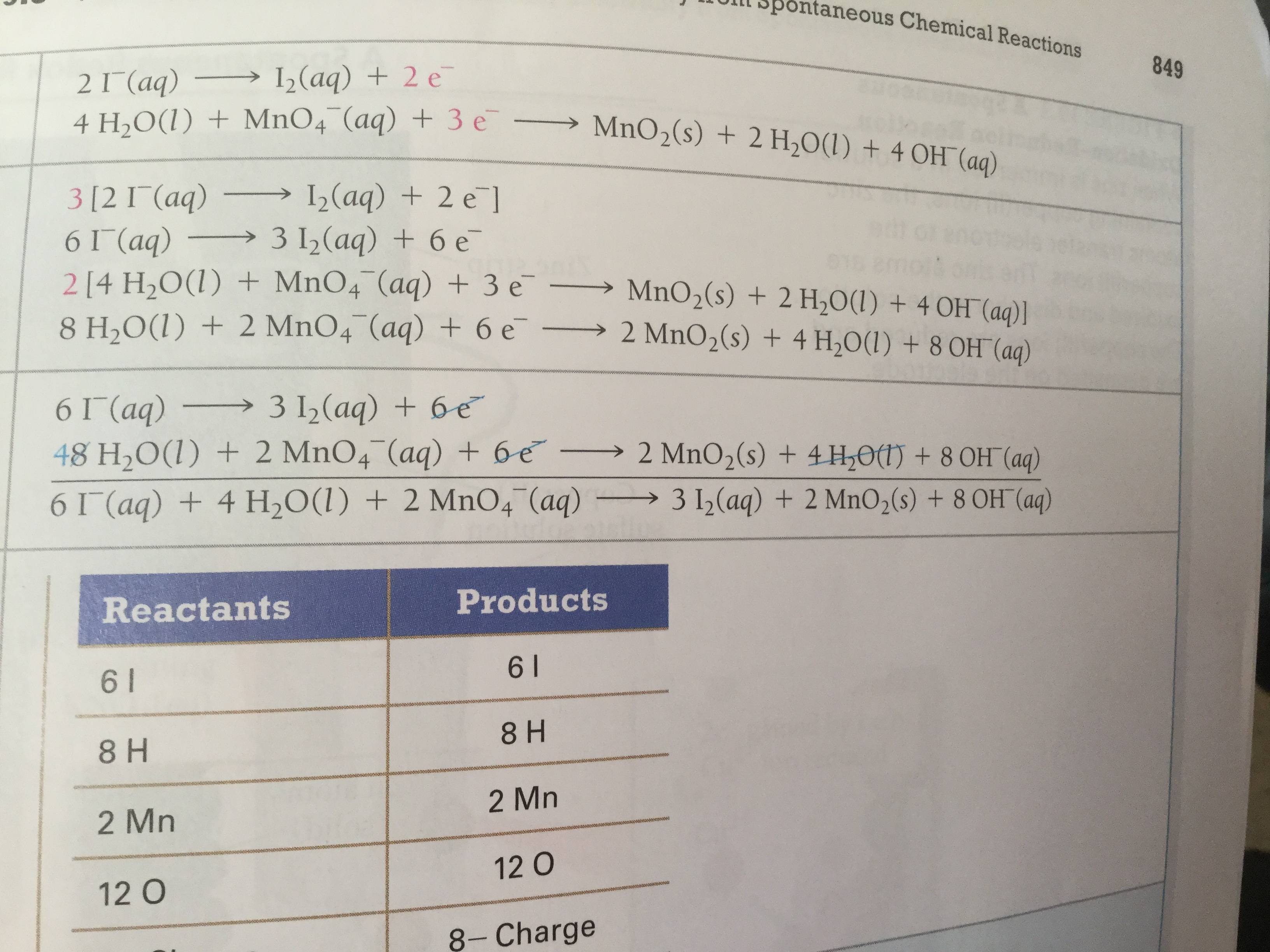 What you are missing is understanding of general nature of redox reactions. Redox reactions need two half reactions to complete. You can't arbitrarily select these two half reactions. They has to be chosen as instructions given in the problem. For example, for your given problem, it should be noted the medium of the reaction, whether it is acidic or basic or neutral.

Main point is changing the conditions most certainly change the reaction. We cannot arbitrarily choose it. For example, to balance the given equation, we have to use what's available for us. We cannot use what is not available or would be available in near future as a product (e.g., as $\ce{OH-}$ in the example in oxidation reaction in neutral medium you are considering).

For the shake of the argument, let's consider that reaction:

The major point is this reaction starts in neutral medium, but become basic at the end. Again, we didn't have choice to keep it neutral because that't the way this happens in nature. Keep in mind that we did not add anything unavailable during balancing the equation. If you check literature for reduction half reaction of $\ce{MnO4-}$ in neutral medium, you would get nothing but equation $(1)$ as we derived.

If the reaction happens at neutral or mildly alkalic $\mathrm{pH}$:

If the reaction happens at mildly aciding $\mathrm{pH}$, it could be as well:

In any case, either spending $\ce{H+}$ either production $\ce{OH-}$ increases $\mathrm{pH}$. Both iodide and permanganate carry a negative charge while their spent forms are neutral. This negative charge must be passed to other anions like $\ce{OH-}$ or neutralized by $\ce{H+}$.

If one considers further disproportionation of iodine to iodide and iodate in alkalic solutions, then the total reaction is:

It may be obvious if the equation is written together with spectator ions:

what you are missing is the Nernst Equation. The two reduction half cell reactions are:

For the $\ce{I3-/I-}$ half cell there is no pH consideration in that HI is a strong acid.

For the permanganate reduction:

As a bit of a side note $\ce{I2}$ has a very limited solubility in solution, hence an excess of $\ce{I-}$ is typically used so that the soluble $\ce{I3-}$ complex is formed.

Not the answer you're looking for? Browse other questions tagged inorganic-chemistry electrochemistry redox ph or ask your own question.

2
Why is water instead of hydroxide ions used to balance oxygen atoms in redox half equations?

2
Balancing Redox Equations
0
What is the origin of the transferred oxygendianion in redox reactions?
1
Is a metal hydroxide fully or partly oxidised in insufficient base?
0
Composition of desiccant
9
Purification/Extraction of Sodium Permanganate
2
Why can hydrogen ions be added to balance a reaction?