I am a beginner trying to summarize what I've learned about:

all at the high school level.

Unlike related threads, I'm going to try to:

Below atoms, shells are the largest grouping of electrons beginner chemists should care about, and among those, the innermost two shells are most important to beginners.

They correspond to periods (rows) on the periodic table of the element.

Each shell consists of at least one subshell. Below atoms, this is the second largest grouping of electrons beginner chemists should care about.

The notation for shells and subshells:

Note: This notation does not specify which orbital those electrons are in... but that info does not matter much to beginners.

An orbital is an actual path (probability distribution function, PDF) that either 1 or 2 electrons can be whizzing through at a time. This is the smallest grouping of electrons beginner chemists should care about. The math underlying that PDF is not critical for beginners.

Each subshell consists of at least one orbital.

Feel free to edit the table. :) 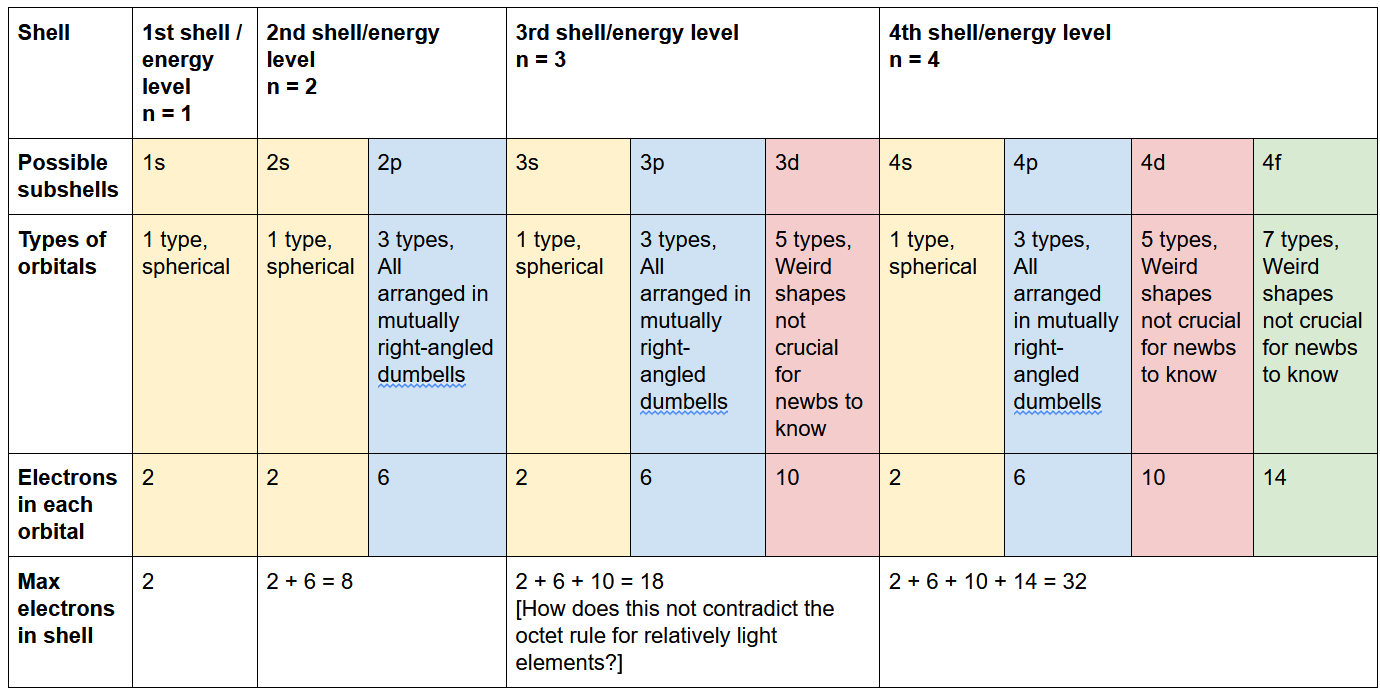 All looks good at a school level, but I would suggest or convince you that we should not attach any physical pictures or meaning to all these atomic concepts. If you pursue science in future, you will have to unlearn a lot of these stories ingrained by school or even university teachers. It is okay to acknowledge and say that we do not fully understand everything as yet. Nature is very very complex. Our only effort is to make simple models of the phenomena we observe in the Nature.

The shell model is outdated and obsolete yet it is good for educational purposes. It was inspired by the planets rotating around the Sun, so learning about it from a historical perspective is good. For example, you wrote "The shells are farther away from the nucleus and thus the electrons in it are less attracted to the nucleus." It may not be a correct picture, because in reality there are no circular shells per se, like an onion ring around a nucleus. Brilliant physicists spent their life time in understanding the atom so don't be surprised if you find atomic structure overwhelming. Indeed it is.

More importantly just delete this interpretation from your mind "An orbital is an actual path (probability distribution function, PDF) that either 1 or 2 electrons can be whizzing through at a time."

An orbital is just a mathematical construct with no physical reality as textbooks show them as balloon models and so on. The rigorous and correction version of an orbital is "Wavefunction depending explicitly on the spatial coordinates of only one electron" (IUPAC)

Their shape depends on the coordinate system being used to solve the Schrodinger's equation. Can you believe that Schrodinger never showed or drew a single picture of orbitals in his four famous papers?

The typical shapes of s, p, d, f orbital are shown in Cartesian coordinate system, but physicists and mathematicians have plenty of other coordinate systems to solve differential equations. Do the electrons care what coordinate system a human chose to represent them or calculate their energies? The answer is no. Their energy turns out to be the same regardless of the coordinate system. Nobody teaches that and I also recently learned this from a physicist who has published a lot on orbital shapes. That gentleman is a big opponent to the teaching of orbitals and the myths associated with them in undergraduate curriculum. Not all agree with him including Linus Pauling.

The atomic structures "stories" as taught to chemistry students as facts is one of the worst things in modern educational system. In my humble opinion, chemists should take the help of modern physicists and ask them how to represent the latest views of atomic structure right from beginning classes. It does not need to have crazy mathematics, but good scientists can explain and elaborate things in words as well. As someone said, "If you can't explain it simply, you don't understand it well enough."

Book recommendation: Hydrogen: The essential element by J. Rigden (from Harvard). A thin book which is very illuminating. Chemical educators should adapt this style. The last chapter or so talks about anti-hydrogen.

Not the answer you're looking for? Browse other questions tagged orbitals electronic-configuration or ask your own question.

3
What are similarities and differences among shells, orbitals, subshells, and energy levels?

66
Why do elements in columns 6 and 11 assume 'abnormal' electron configurations?
3
What are similarities and differences among shells, orbitals, subshells, and energy levels?
35
Difference between shells, subshells and orbitals
10
Properties of f-orbitals
2
Reading number of outer shell electrons and other properties from periodic table?
6
Energy of electrons in the same subshell
6
Why is zinc not considered to have a noble gas configuration?