The following is a tutorial question I need to do: 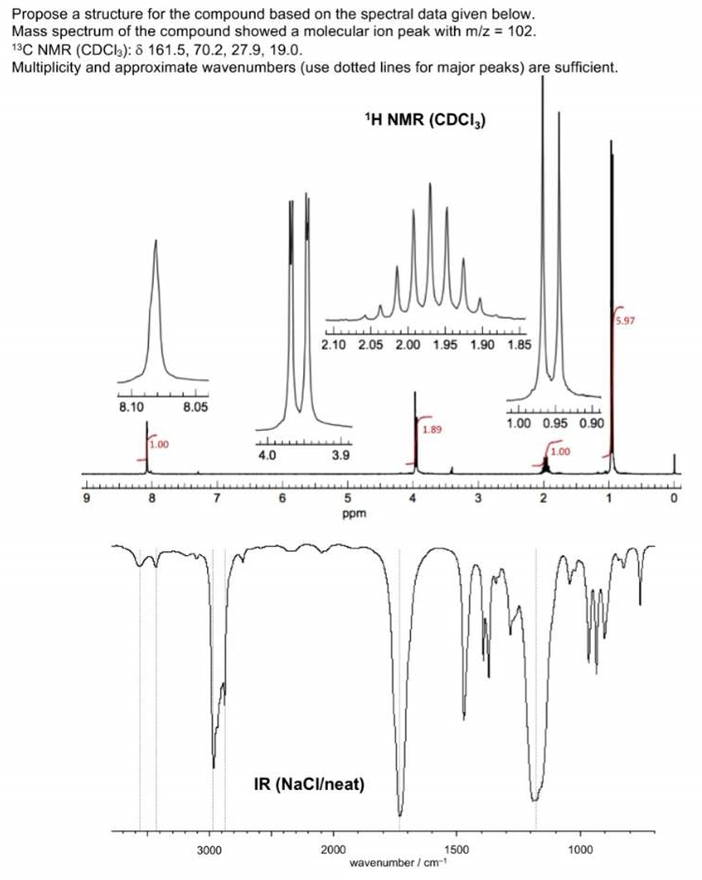 I initially thought the answer was isobutyl formate (CAS:542-55-2) but what confuses me is the dd peak at $\pu{3.9-4.0 ppm}$. To my knowledge, isobutyl formate should give just a doublet at that region. What am I missing out?

Your question is how can the CH2 be split into a dd when the -OCHO shows no triplett, right?

Well, the second splitting at the $\ce{CH2}$ is very small, and the $\ce{CHO}$ looks like it is very nearly split. That´s not just a broad peak, it has a rather clear shape imo. If you do just a bit of zero filling and apodisation, the triplett might well (should) appear.

But generally, you are right. Every splitting must have its counterpart.

Zero filling: Adding blanks to the end of your FID. Artificially increases the resolution, i.e. point density of your spectrum.

Apodisation: Changing the gain of your FID towards the end, by multiplying it with a decreasing or increasing function. The former gives you a less noisy spectrum, the latter a better resolution (sharper peaks actually), each at the cost of the other. The mathematical term for that is "convolution".

5
How do I find out what benzene containing compound this is with IR and NMR?
2
What happens when prop-2-en-1-ol reacts with concentrated hydrogen bromide
4
The carbon-13 NMR for 1,1,1-trichloroethane
4
LiOH hydrolysis of methyl 2,2-dimethoxyacetate not giving product?
8
Electrophilic substitution of benzene with conc. HNO₃ and HNO₂
1
What should be the name of the given compound?
2
Can ring inversion in Cis-Decalin allow the E2 reaction?
6
Analysing reaction with chair conformation of substituted cyclohexane