Why isn't the American nickel magnetic?

I never thought that modern American nickels actually contained nickel anymore. However, according to this wiki article, the coins actually do contain 25% nickel, the rest being copper. And yet, no US coin produced today is officially magnetic. Why is this alloy of nickel not attracted to a magnet?

(and yes, I tried time and again to find and answer elsewhere online.)

While nickel is ferromagnetic, copper is not. As you said, the American nickel is currently 25% nickel and 75% copper. According to this paper (from 1931!), in order for a nickel-copper alloy to be ferrogmagnetic, it must contain at least 56% nickel:

... 56 percent nickel is required before the alloy shows ferromagnetic properties at ordinary temperatures.

None of the US coins are magnetic (ferromagnetic), except for the 1943 Lincoln penny (Steel Cents, made in steel and zinc to save copper for ammunition during wartime), which are considered magnetic. Almost all of those coins other than Steel Cents are made with higher percentage of copper ($\ce{Cu}$) and lower percentages of other metals such as nickel ($\ce{Ni}$), zinc ($\ce{Zn}$), etc. (mostly $\ce{Ni}$). For example, current 5-Cent US coin (US Nickel) is made of 75% $\ce{Cu}$ and 25% $\ce{Ni}$, as OP noted in the question. You can find some percentages in US coins in this AZO Materials Article.

Pure $\ce{Ni}$ is magnetic at room temperature while $\ce{Cu}$ is not. Yet, why US Nickel is not magnetic?

The magnetic properties of $\ce{Cu/Ni}$ alloys have been studied by several researchers (e.g., Ref.1 and 2), perhaps because their use in alloys goes back at least two thousand years, at the time, the knowledge of the composition of alloy was unknown (Note: the elemental nickel was only discovered relatively late on). According to this research, pure $\ce{Ni}$ is magnetic with its Curie temperature being around $\pu{527 K}$ (Curie temperature or Curie point is where a metal loses its ferromagnetism with elevating temperature). When $\ce{Ni}$ mixes with $\ce{Cu}$ to make an alloy, this Curie temperature decreases with increasing amount of $\ce{Cu}$ (Ref.3): 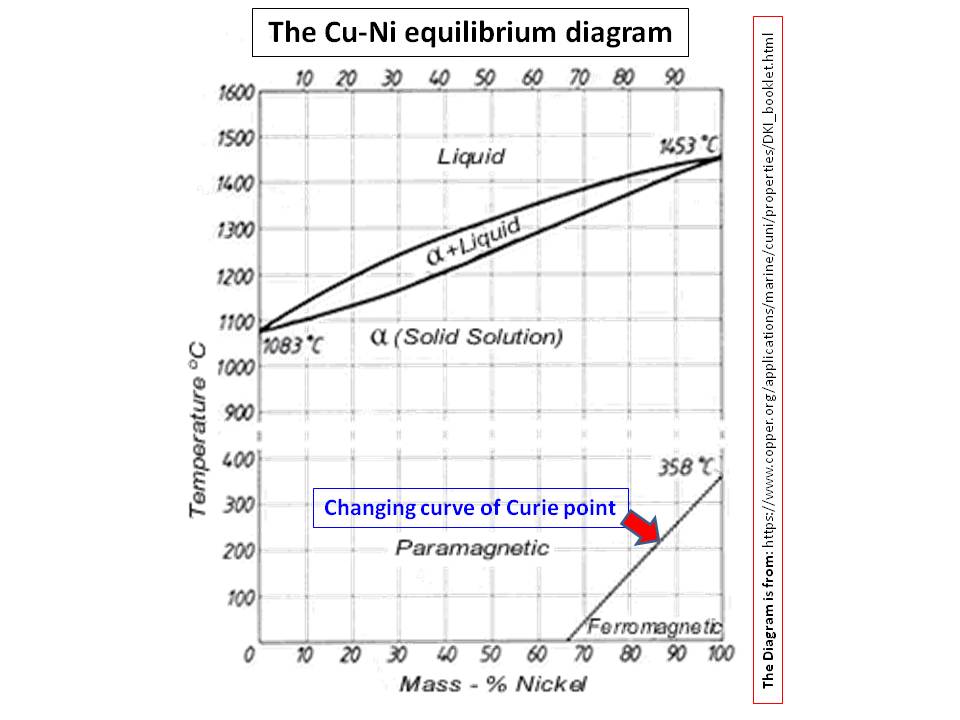 However, Kaufmann and Starr (Ref.2) have shown that these alloys with less amount of $\ce{Ni}$ would gain their their magnetism at way lower temperatures (about $\pu{14-77 K}$).

To the best of my knowledge they are not magnetic to make it very hard to profitably counterfeit our coins. If they are magnetic the vending machines will remove them with a magnet. This is the explanation I was given in the mid 1960's. Yes machines in our town had the magnets, I tried one.

Not the answer you're looking for? Browse other questions tagged physical-chemistry transition-metals metallurgy magnetism alloy or ask your own question.