Why is 3,6-dimethylpiperazine-2,5-dione optically active in spite of having a centre of symmetry?

I learnt in my chemistry class that if a molecule has an element of symmetry (either a plane of symmetry or a centre of symmetry), it will not be chiral and hence will not show optical activity.

My professor told me that in alanine anhydride the carbon atoms with methyl groups would be non-planar, hence it will be non-symmetrical:

But if I consider one of the above-mentioned carbon atom above the plane of the ring, and the other below the plane of ring, a centre of symmetry will still exist. Where am I going wrong?

There is no evidence (e.g. aromaticity) to support your claim that the compound is planar. In fact, crystalographic studies [1] revealed existence of both cis- and trans-3,6-dimethylpiperazine-2,5-dione. Corresponding CCDC numbers are LCDMPP01 and TRDMPP01, respectively — feel free to open the links and play around with the 3D structures in JSmol to understand the difference.

According to Sletten, in cis (ʟʟ) modification the ring is puckered resembling a skewed boat conformation, whereas the ring in trans (ᴅʟ) molecule is nearly planar: 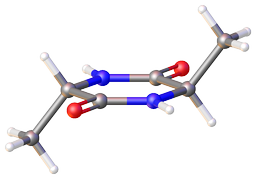 3
Is axis of symmetry considered a true symmetry?
40
How to derive these general formulae for number of stereoisomers of a compound with a possible plane of symmetry?
1
Which one of the following is optically active?
6
Optical Isomerism in Coordination Compounds of type MA₂B₂(CC)
3
How many stereoisomers are possible for 1,2-dimethyl-4-(propan-2-ylidene)cyclopentane?
1
Optical activity of cis coordination compounds
1
How to check which compound will show optical isomerism?