I am not quite sure how to start on 1b.We are given 2 diagrams but I am not sure how to use the second one in the question, or if we have to. I got the point group for Cl4+ to be (D2h) however, but after that I do not know how to proceed. 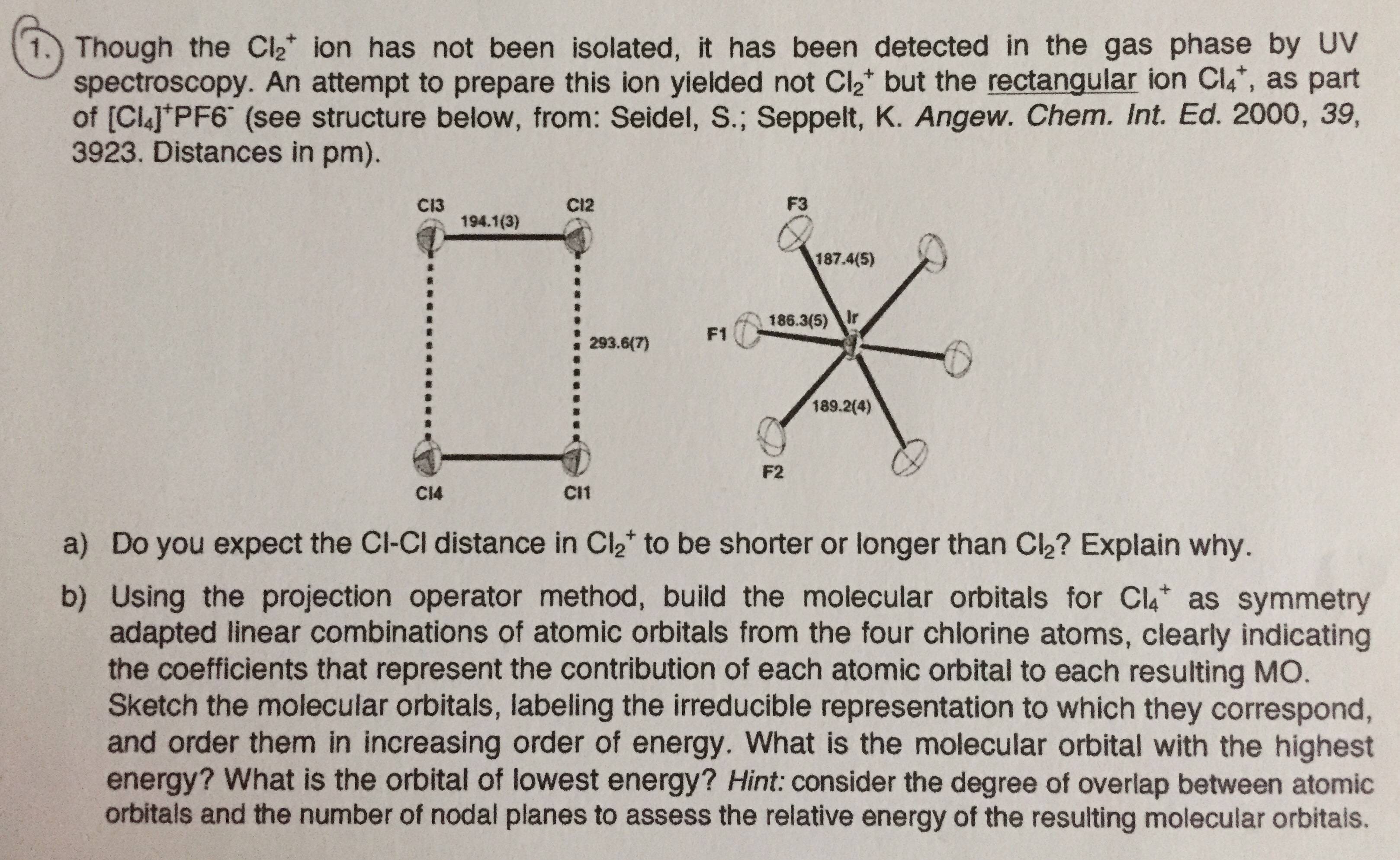 To form a linear combination, a 'victim' vector is chosen and operated on with each symmetry operation in the point group, $C_2, \sigma(xz)$, etc. to find what vector this turns into. This vector's name (the basis function) is then multiplied with the character from the point group corresponding to that symmetry operation and symmetry species. Finally, the names are added together by moving from one symmetry operation to the next along the top row of the point group. We expect the result to be the sum or difference of the displacement vectors, e.g. $2v_1 + v_2 - v_3 \cdots$ and so forth. The same formula or algorithm is used if the combinations of atomic orbitals that make up molecular orbitals are sought as for vibrational normal modes..

where $M$ is the symmetry species label, $A_g, B_{3g}$, and so forth, $h$ is the order of the group, $d$ the dimension of the irreducible representation, and the sum is over all the classes. Because the resulting vector will be normalized $d/h$ can be ignored. One further point is important. In the $C_{3V}$ point group, for example, there is a heading $2C_3$ as there are two members in this class, and this must be split in the summation into $C_3^+$ and $C_3^-$. This is because moving a vector $120^ \text{o}$ to the right, say, will turn it into a different vector than turning $120^\text{o}$ to the left, similarly, any mirror planes must be separated out. The character for symmetry species $M$ is $c_j$ and $S_j(v)$ is the effect that operator $S$ in column $j$ of the point group has on our victim vector $v$.

The result of this operation is to produce a vector whose name is recorded. For example, if $S$ is the identity then the result is $E_1(v) = v$, other operations may leave $v$ unchanged or change it into another vector. Finally, note that if the reduced representation of the vibrations or molecular orbitals contains two or more symmetry species of the same type, e.g. $2A_1$, then two or more different victim vectors will have to be chosen to obtain all the linear combinations.

The first step is therefore to choose vectors to represent, say $\pi$ orbitals and operate on them to form the reduced representation and so find the only those symmetry species that can be present then use the formula above and record the names of the total result produced for each symmetry species in turn, e.g. $2\pi_1-\pi_2$ etc. Using the nodes produced you can guestimate the order of energy levels.