This is the question:

Which one is more acidic? 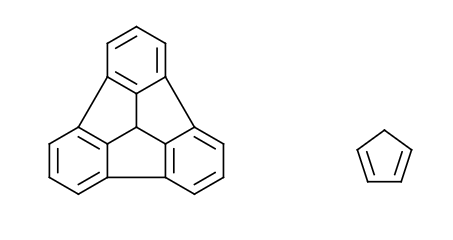 According to me, cyclopentadiene should have been the answer, as losing a proton would make it aromatic; whereas the first option doesn't need deprotonation to be aromatic, it already is. However the first option is given as the correct one.

I have come up with the following reasonings as to why the first option should be more acidic:

The second reasoning seems much convincing to me but I fail to understand how can I compare that factor with the aromaticity factor involved in cyclopentadiene.

The method presented by Yusuf is a simplified model, which works best for well-behaved molecules. Unfortunately in this case it presents the 'correct' result based on incorrect assumptions. (Even though I did a calculation, I am not 100% convinced this is actually the correct result in the first place.)

In order for the resonance to stabilise a negative charge, the π-systems must be aligned, which is the case for the deprotonation of cyclopentadiene, but it certainly is not true for the other molecule F (Loong said it's called 3a2H-benzo[3,4]pentaleno[2,1,6,5-jklm]fluorene). Here is the calculated structure at the ri-BP86/def2-SVP level of theory: 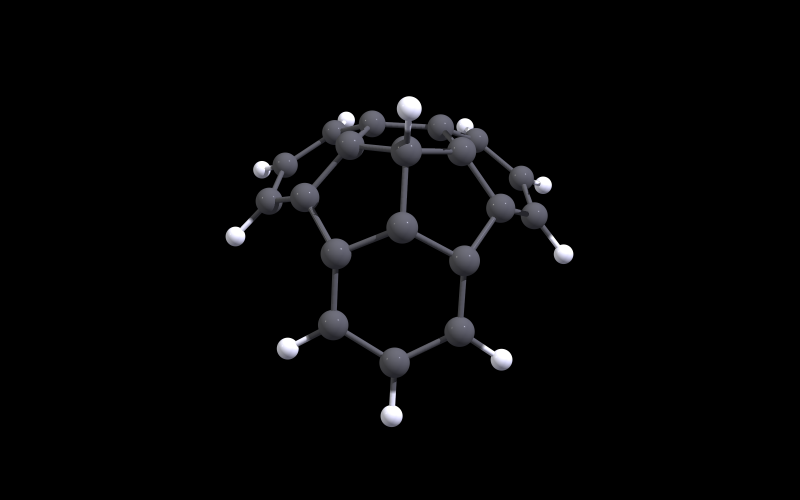 As you can see, it is domed, and there are three (almost) independent aromatic systems. Through deprotonation this will not change much.

A reason for its relatively high acidity can be found in applying Coulson's Theorem, where the bond angle between two $\mathrm{sp}^x$ hybrid orbitals can be calculated from their angle $\omega_{ij}$ and their hybridisation indexes $\lambda_x$: $$\cos(\omega_{ij}) = -\frac{1}{\sqrt{\lambda_i\lambda_j}}$$ Since the molecule is C3v symmetric, therefore $\lambda_i = \lambda_j \mathop{:=} x$, this simplifies to: $$ x = -\sec(x)$$

The reason for the high acidity is therefore not the stabilisation of the conjugate base, but the destabilisation of the acid. This is the completely reverse reasoning as cor cyclopentadiene, in which the corresponding base is massively stabilised by resonance.

In my opinion, the exercise is something more on the level of quantum chemistry course and belongs into the canon of a masters student. While simply models will accidentally produce the correct result, it is important to see, that they completely fail for F. Structure-property relationships cannot be inferred from a 2D-graph of the molecule. To be honest, the reasoning above was also rather post-hoc, after I have calculated the molecule and analysed its structure.

On the ri-BP86/def2-SVP level of theory (which is rather crude, but I don't have a supercomputer at home) it really comes out that F is more acidic. The following isodesmic reaction yields a difference in electronic energy of about $\Delta E_\mathrm{el} = \pu{-92.8 kJ mol-1}$.

Important: Even though the above sound reasonable, it still neglects plenty of things and has other shortcomings; to name the most important: thermal corrections, solvent effects, level of theory.

Upon deprotonation the structure does not change very much (see larger image), it remains very domed, see the overlay of the structures below. 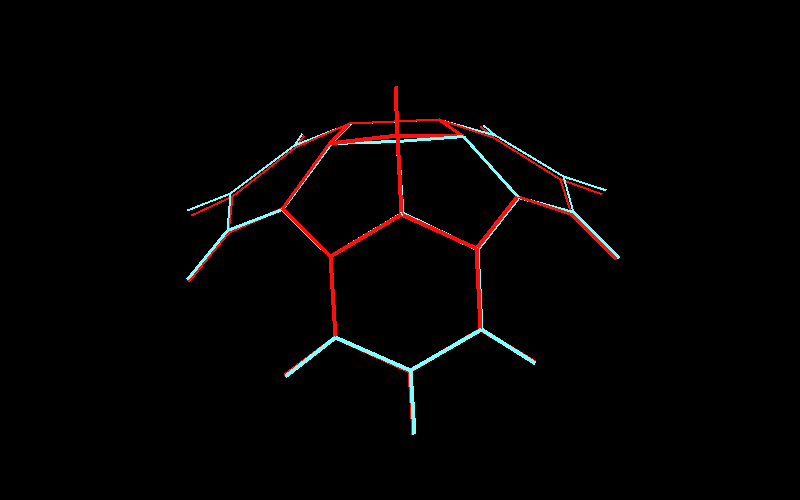 Judging from the three highest occupied molecular orbitals (HOMO, HOMO -1, HOMO -2) we can still presume some delocalisation of the negative charge into the adjacent aromatic rings. 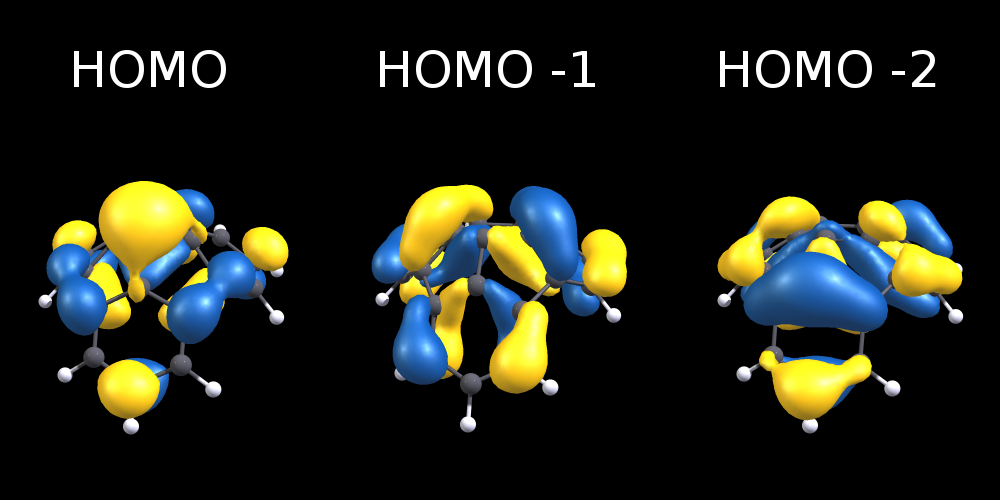 I'm talking more about hybridisation, Bent's rule, and Coulson's theorem in the following: Are the lone pairs in water equivalent?

You can take both factors (1) and (2) combined as the reasoning for the greater acidity of the former. When you are comparing stability (in thermodynamic terms) of two conjugate bases, you are basically trying to position them with respect to each other on the energy axis of the energy profile (or reaction coordinate diagram).

In this case, the reaction coordinate (RC) for both the intermediates remains fixed (as a similar reaction, namely, deprotonation has occurred for both the reactants), while you try to use qualitative arguments to position them relative to each other on the energy axis.

In that spirit, one basic idea which we can use to check is that by seeing that:

More is the energy released by the system in form of resonance, more will be the stability of the negative charge.

Note that if you look at the reactants themselves, the first species is releasing roughly 3 times the resonance energy of benzene more as compared to the second one due to the presence of three benzene rings. Hence, we can estimate that the former should have had a lower energy positioning than the latter to start with.

So, by a qualitative estimate, the (1) species should be energetically more stable than the (2).

Not the answer you're looking for? Browse other questions tagged organic-chemistry acid-base aromatic-compounds hydrocarbons or ask your own question.

47
Are the lone pairs in water equivalent?
7
What is the most acidic neutral hydrocarbon?

13
Why does hydrogen bonding in salicylic acid make it more acidic?
16
Is cyclopentadiene or cycloheptatriene more acidic?
0
Why can't oxygen in furan be sp-hybridized?
5
Competitive protonation between alkene and carbonyl
8
Why is the thione tautomeric form of 2-Mercaptopyridine favoured?
7
Which rings of this heterocyclic compound are aromatic?
25
How does the cyclopropyl group influence conjugation and aromaticity?
8
Acidity of cyclopentadiene when fused to benzene rings
8
How to compare stability between 5‐methylcyclohexa‐1,3‐diene and 3‐methylenecyclohexene?