Thermal reduction of other metal oxides beside Fe2O3

In the firing of ceramic glazes you can make an effect called oil spot. This is done by making two layers of glaze. A bottom layer rich in iron oxide (+15%) and a top white layer that's fairly permeable. Once your reach 1225° C, the iron loses it's bond with the oxygen and goes into reduction, despite being in an oxygen rich electric kiln. So the oxygen bubbles up to the surface, taking along a bit of the iron. It then turns into FeO, and it also has something to do with magnetite which I don't understand.

Anyway, the result is that you get a white glaze with dark spots surrounded with grey/green parts, or some yellow.This effect is very nice but it only works with iron oxide as far as I know.

So my question is: are there other oxides that can have the same thermal reduction effect, and if so at what temperature. I know somebody found a way to make it in blue (it took him 4 years) so maybe he used cobalt oxide, though that looks to me to be to obvious to take 4 years. Anyway, he's not a chemist, he's a potter.

For a potter this is hard to find out but maybe for a chemist this is not that difficult to resolve, so I thought why not go to the people who know this stuff much better than us potters.

One candidate is manganese dioxide, $\ce{MnO2}$. This decomposes at 535°C, releasing oxygen. As the phase diagram from Ref. [1] shows below, the reduced manganese fuses with excess silica between 1250 and 1300°C, forming rhodonite ($\ce{MnSiO3}$). You would see this as a pink color. But, of course, I'm a chemist rather than a potter, so I make no guarantees on whether or how it works in pottery! 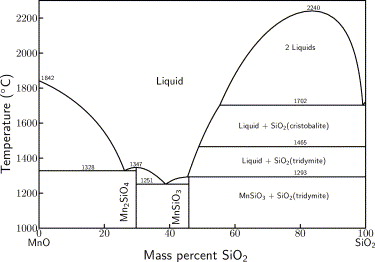 If I were not a chemist, and wanted blue, I would suspect cobalt first, but after 4 years, I might suspect copper, but not just Cu or CuO or Cu2O. Copper chlorides can be blue, but maybe not in a hot (or cold) glaze.

I'm not a potter, but I wonder if you can use the idea behind the borax bead test (https://en.wikipedia.org/wiki/Bead_test) to get your different colors. Two approaches: 1) combine the metal (oxide) and borax and melt them together, then grind them to the desired size before glazing. 2) Just combine them and dump them into the glaze. Borax has water of hydration which will bubble up and do things like the oxygen from Fe2O3.

There are glazes for sale on the internet which give colors, which could be combined with the Fe2O3 to give different results, but as blacksmith said, it's cut and try! One site I found (https://ceramicartsnetwork.org/daily/ceramic-glaze-recipes/glaze-chemistry/recipes-cool-ceramic-glaze-colors/) showed these colors:

6
Why is the water reduction of oxygen favored in acidic conditions?
4
Why are metal oxides generally more stable than their corresponding elemental forms?
1
Sodium metal reduction of chloroform
21
Painting metal, does it matter if all rust is removed before?
4
Respect to other chemicals in reduction/oxidation potentials
21
Iron chemistry: acetates for ebonizing wood
3
Reduction of oxides by carbon
1
Why transition metal chloride complex have lower reduction potential than metal aqua ions?