How can we define a non-spontaneous reaction?

We know that the value of equilibrium constant $K_c$ must be such that, $$K_c > 0$$ Thus, $$Q_c < K_c$$ Which is the only condition for the advancement of reaction in forward direction. This condition does not consider the value of change in Gibbs energy $\Delta G$.

Hence, can it be concluded that every reaction is spontaneous in forward direction if it starts with only reactants?

If so, how can we define a non-spontaneous reaction?

It sounds like your confusion arises from not making a distinction between $\Delta G$ and $\Delta G^\circ$ when describing a reaction as spontaneous or not.

The $\Delta G^\circ$ is the free energy change for the reaction at the defined "standard" conditions of 1 M solute concentrations and/or 1 bar gas partial pressures of both the reactants and products. When we make the general statement that a reaction is spontaneous or not, we are usually referring to whether this $\Delta G^\circ$ is greater or less than 0.

If $\Delta G^\circ < 0$, then the reaction is described as spontaneous, and it will proceed in the forward direction when starting from a mix of 1 M reactants and 1 M products until equilibrium is reached.

In contrast, $\Delta G$ is the free energy change for the reaction in whatever state is of interest. In your case, you have chosen a state with no product present at all. When we say that a reaction is spontaneous based on $\Delta G$, we mean whether it will go in the forward or reverse direction from this specific state of interest, not the standard state.

Obviously, if there is no product present, the reaction cannot go in the reverse direction (forming reactant from product), so all reactions will go in the forward direction if started in a state of $0$ product. That is what you have shown quantitatively using $Q=0$ so that $\Delta G <<0$.

So you are absolutely correct that every reaction in a state in which no product is present is spontaneous. That does not mean, however, that the reaction will necessarily happen anytime soon. Very often, the activation energy barrier is high enough that the reaction rate is extremely slow. Or it is possible that the equilibrium constant may favor reactants so much that even one molecule of product is sufficient to reach equilibrium and the reaction stops very quickly.

In general it is necessary to consider any entropy changes in determining whether a system is at equilibrium or if a spontaneous change will occur.

As there must be an increase in entropy in actual processes then $dS_{system}+dS_{surr}=dS_{irrev} \ge 0$. By using the first law with the last expression and after several steps, we find that in an isothermal reaction (surrounding temperature $T$) in which no work is done other than $pV$ (gas expansion) work the condition becomes

This is what you have determined in your question but with the implicit assumption that reaction will occur.

A non-spontaneous process is one that is already at equilibrium or that will require input of some work to make it change.

I agree with Andrew that it depends on whether you define spontaneity based on $\Delta G^\circ <0$ or $\Delta G < 0$. Typically, freshman chemistry books use the former.

The reason I don't like using the sign of $\Delta G^\circ$ (as opposed to that of $\Delta G$) as an indicator of spontaneity is it causes the very confusion you are experiencing. It also obscures the concept of chemical equilibrium.

I thus favor equating spontaneity with the sign of $\Delta G$ (which in turn depends not only on $K_{eq}$, but also upon where the reaction mixture is relative to it), which is the view you are articulating. For clarifying this latter view, I think the following diagram, which I've borrowed and modified from one of my earlier answers (Are all exothermic reactions spontaneous?), is helpful: 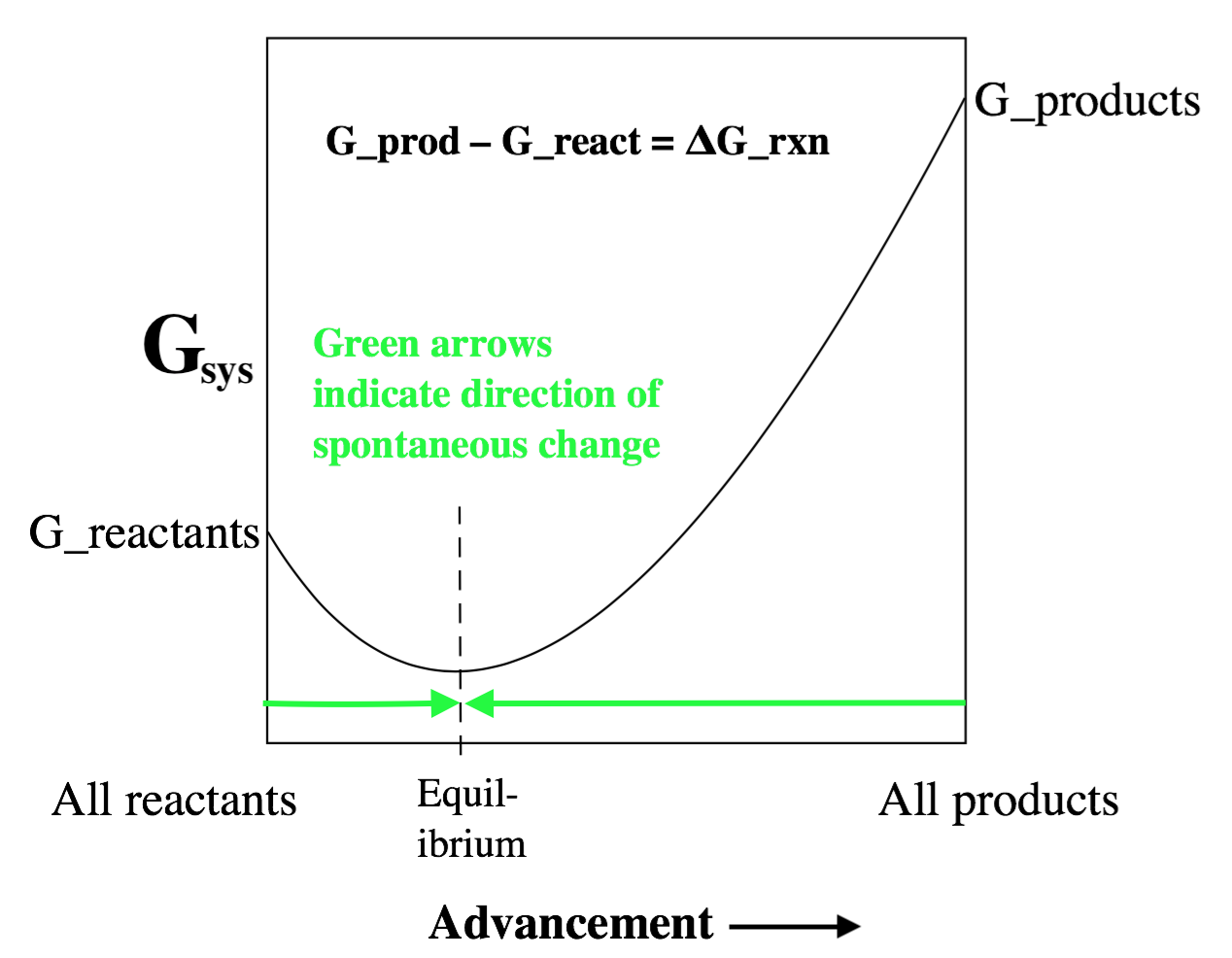 This question shows that you have probably not really understood what the free enthalpy (or Gibbs energy, or free energy) is. I will try to explain it qualitatively without too much thermodynamics. Let's go !

The origin of the Gibbs energy is coming from Gibbs' reflexions on the spontaneity of chemical reactions. He was trying to find a potential energy similar to the mechanical energy for predicting a spontaneous reaction. In mechanics, if an object is situated at a high level, let's say on a table, and that it has the possibility of going to a lower level, on the ground, it will spontaneously do it and fall, without any effort greater than a flip from the observer. Energy is produced in the fall. The contrary is never spontaneous. You may heat it, it will never jump back up higher onto the table. You always have to pick up the object, give it some amount of mechanical work to put it back on the table.

So Gibbs was trying to find some sort of potential energy that atoms and molecules may have that will always decrease in spontaneous reactions. Enthalpy, or heat content, is not this energy, because endothermic reactions may be spontaneous. For example, the mixture of NaHCO3 and HCl solution reacts spontaneously, but the reaction is endothermic. The temperature of the system decreases. To go back to the original temperature, you have to heat the final system.

As heat content is not the energy Gibbs was looking for, he tried to discover the energy which is always exported in a chemical reaction, namely both in endothermic and exothermic reaction. Is there such an energy somewhere ? Yes, there is such an energy, and this is electricity. A cell works out by a chemical reaction. This reaction may be exo- or endothermic. But the galvanic cell will always deliver electric energy. A cell cannot absorb electric energy. It would be a non-sense. So Gibbs decided that in all spontaneous chemical reaction, "his energy", called G, must decrease, whatever the thermic effect. And $\ce\Delta$${G}$, the variation of $\ce{G}$, is related to the emf $\ce{E}$ of the cell by the relation : $\ce{\Delta G = - zEF}$

Have you followed my explanation ?

I think it is best to start with a real-world example of a spontaneous reaction as cited in electrochemistry, namely, as occurring in an electrochemical (or battery) cell. In particular, comments from Wikipedia:

A spontaneous electrochemical reaction (change in Gibbs free energy less than zero) can be used to generate an electric current in electrochemical cells. This is the basis of all batteries and fuel cells.

However, for those with experience with the startup of a so-called electrochemical cell, there can be an obvious inception (or waiting) period for these 'spontaneous electrochemical reactions' to proceed!

To explain the lag effect, I further note this comment from an educational source on entropy:

Changes in internal energy, that are not accompanied by a temperature change, might reflect changes in the entropy of the system in so called 'spontaneous' reactions.

Apparently, an increase in entropy corresponds to an increase in disorder. And, in the case of the battery cell with a salt bridge, the removal of electrons via a wire from the cell also results in a corresponding movement of cations and anions (to maintain charge balance in the respective half-cells). The latter occurs more slowly, but apparently is required for the continued efficient flow of electrons.

So, as illustrated by the so called 'spontaneous' electrochemical cells, there is also an increase in entropy component to balance the decrease in Gibbs free energy.

Interestingly, my cited example/argument seems to suggest that the word 'spontaneous' as coupled to 'spontaneous reactions' may implied, in particular cases, a more relative measure in terms of actual passage of time.

Not the answer you're looking for? Browse other questions tagged physical-chemistry thermodynamics equilibrium or ask your own question.

2
Are all exothermic reactions spontaneous?
3
Change in enthalpy and entropy when sugar dissolves in water
-1
Why does increasing the concentration of the salt bridge in a galvanic/voltaic cell increase voltage?

20
Why does the reaction quotient use the products (multiplications) of reactants and products, rather than their respective sums?
6
How many grams of each substance will be present at equilibrium in the reaction of ethanol and ethanoic acid?
2
Spontaneous Reaction and Gibbs Free Energy
3
Gibbs energy and chemical equilibrium : false proof of spontaneous generation, but why?
4
Equilibrium constant. Can it be reached?
1
Equlibrium for a non-spontaneous reaction
4
Why can we use standard entropy when determining temperature at which a reaction becomes spontaneous?
3
Is this a spontaneous or a non-spontaneous process?