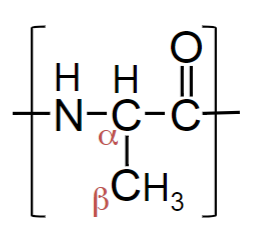 The correct spectrum is given at the end of this question

I don't really understand what is meant by "in a $^{13}$C marked sample" however I assume that it means that I am supposed to look at C instead of H as my core atom. So from this I tried to determine the coupling. If looking at the α-C I assumed that its neighbouring H would split it into a doublet and then the hydrogens of the β-C (3+1 = 4) would split that doublet into an multiplet of eight. Which seems to be right if compared to the correct spectrum. Similarly, the β-C is first split into triplets and then into doublets, which makes 6 peaks.

However, why would C=O cause a peak? And how does it become a doublet? 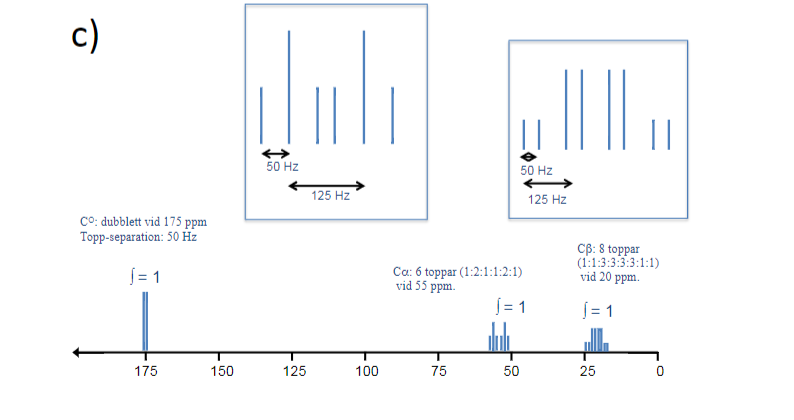 The compound in question is seemingly a polypeptide. If all carbons are labeled $\ce{^{13}C}$, then you can obtain very good $\ce{^{13}C}$-NMR spectrum withe a few accusations with minimum noise. That's probably what "$\ce{^{13}C}$ marked sample" means.

I let OP to figured out what splitting would $\ce{C^\beta}$ peak would show.

13C NMR detects only the 13 C isotope of carbon, whose natural abundance is only 1.1%, because the main carbon isotope, 12 C , is not detectable by NMR since its nucleus has zero spin. (https://en.wikipedia.org/wiki/Carbon-13_nuclear_magnetic_resonance)

You seem to have the number of peaks in the α-C and the β-C confused. For example, the α-C peak is first split into a triplet by the two neighboring carbons, and that triplet is split into a doublet because of the α-C hydrogen.

Considering the α-C and the β-C are split by neighboring carbons, I believe you can then determine why the C=O peak is a doublet.