I want to ask a question about the shoulders of peaks when separating overlapping peaks.

I have the following spectrum circled with relevant shoulders: 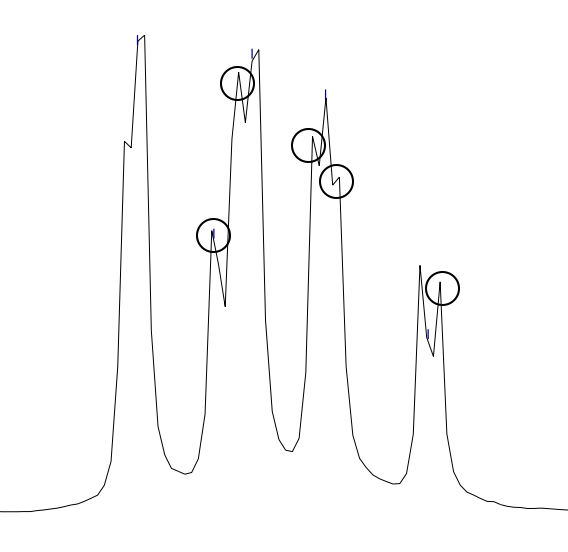 I believe that the spectrum above shows an overlapping triplet and doublet, but I want to know what causes these shoulders in the NMR spectrum. I'm stuck to whether to decide there is further splitting of a small $\ce{J}$ value or to just assume it's a shoulder. 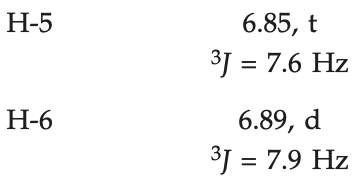 What is causing these shoulders? Are they part of the signal or just a result of poor preparation leading to artefacts?

A good question. The term 'shoulder' is really an informal description used to describe the appearance of parts of peaks in the NMR spectrum. When a peak tends to deviate from the standard Lorentzian, we might describe this as having a shoulder. Shoulders can come about from typically three origins:

For Salicylamide, as described in your paper, we would expect H6 to be a large doublet (ortho to H5, ~7-8Hz), but also show meta coupling to H4 (~1-3Hz), and so we expect this large doublet to exhibit small splittings. Indeed, that is what you are seeing. On a good shimming day, in better solvents than dmso, we might even expect to see para splitting (<1Hz - don't hold your breath though). For the H5, we expect, again, a large ortho doublet coupling to H6, but also a large ortho doublet coupling to H4 (again, ~7-8Hz). That gives us the reported triplet, which is in fact a dd. But, we also expect to see some meta coupling to H3 (again 1-3Hz). Again, we see this, and each of these of these should be split due to the small meta couplings. (And we'll leave alone the discussion about whether they have reported apparent splittings, as opposed to J couplings, otherwise J56=J65),

And breath out. So what you are seeing is genuine splitting coming from small couplings. These are often not reported in experimental data, because it is quite difficult (or at least time consuming) to resolve all of these couplings. You can get a better understanding of these small splittings if you use resolution enhancement when you process your data. Use a window function such as a small negative line broadened exponential function, or a gaussian function, and you can often split these lines almost to the baseline.

There are two signals. ddd and dd. However, the ddd contains a very small coupling constant, so the ddd appears in part as a triplet.

A second order effect can also be argued, to explain the roofing effect.

5
1H NMR Broad peaks
3
How many peaks would there be in H1 NMR of ethene?
10
Historically, how was the connection between NMR peaks and hydrogen atoms made?
2
NMR Spectra Oddities
1
Predict the number of peaks in H-1 NMR of sesamolin
7
NMR terminology: "Transients"