How to perform IR spectroscopy on silica particles at various relative humidities when they are passed through a tube using pressurized air? [closed]

Surface bonds of silica particles are susceptible to humidity and frequently change between silanol and siloxane with changing RH. I want to measure how these surface bonds change with the humidity using IR spectroscopy when the particles are flown using pressurized air through a tube.

Despite your question is a bit vague about the sample, I assume «when they are in motion» refers to particles passing a tube, are close to each other -- in contrast to particles floating in air.

If so, than you should consider to couple infrared spectroscopy (about the energy band) with a probe based on attenuated total reflection. Roughly speaking, classical optics predicts you a threshold incident angle where light of a certain frequency no longer is able to leave an optical dense material (high refractive index, for IR for example Silicon, Germanium, or a small diamond) to enter a less dense material (for IR, for example air, most of organic materials). Recognizing light equally has character of a wave however «allows» that light at this interface still interacts sufficiently enough that one may extract information to calculate an IR spectrum. 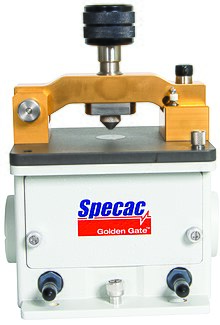 but there are ATR-IR probes which you may immerse into fluids to monitor the advancement of reactions (e.g., Mettler's reactir) 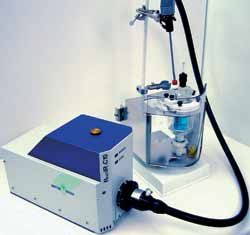 where the probe window is at the side or on the tip of the probe itself: 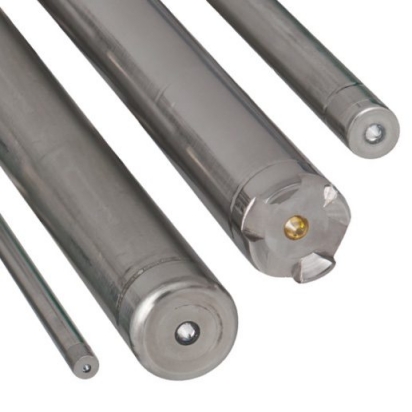 Potentially -- compared to classical transmission IR -- you truncate any sample preparation (no KBr pill, nor nujol) and may record data of not-too wet samples, too. Don't forget an ATR correction, as the small penetration depth $d_p$ of light across the phase boundery between window material and sample depends both on $n_c$ (window / crystal material), $n_s$ (sample), the incident angle $\theta$ and wavelength $\lambda$ applied.

Not the answer you're looking for? Browse other questions tagged spectroscopy humidity or ask your own question.

3
Why should AAS use element lamps?
1
Does urine make concrete hygroscopic?
1
Humidity diffusion in Silicone Elastomer and effects on refraction / transmissivity