I have a question about 1H NMR splitting of 3-methyl-1-butanol.

The spectrum looks as the following. 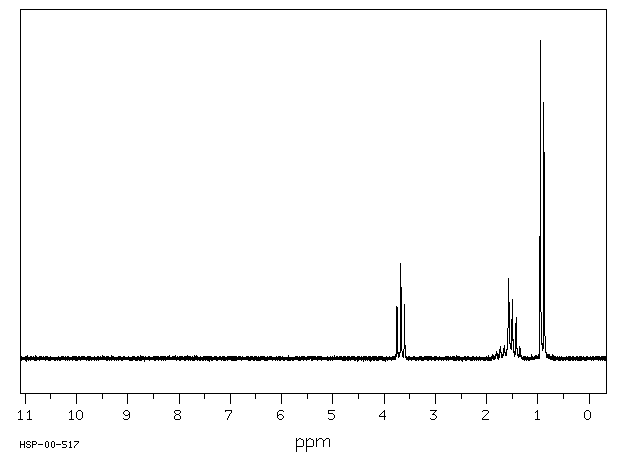 The assignment of the NMR spectrum is the following.

So based on the results, A hydrogen is splitted into triplet. Is this splitted by D hydrogen? If so, why not C hydrogen on the alcohol group?

The results are retrieved from the following link: https://www.chemicalbook.com/SpectrumEN_123-51-3_1HNMR.htm

In this example, HA is indeed split by HD, but you have quite rightly identified that we don't see coupling to the alcohol proton, HC. This is pretty normal that we don't observe couplings to protons that are termed labile; -OH, -NH2, -SH, for example. Whenever samples contain trace amounts of an acid or base, there will be very fast exchange between the alcohol proton and that other species (water is often the culprit). In solvents like chloroform (which this spectrum was run in), the exchange is very fast, and you just observe a single peak. In other solvents, such as dmso, you might observe two broadened peaks. But, the exchange means that any coupling to that nucleus is lost

0
Is this the NMR spectrum of 3-methyl-1-butanol?

3
Assigning the 13C NMR spectrum of bromobenzene and 4-bromobenzophenone
4
The carbon-13 NMR for 1,1,1-trichloroethane
1
1H NMR of 4-Methylanisole
1
1H NMR of cyclohexanecarbaldehyde
4
Proton NMR splitting in 2-substituted furan
11
How to assign overlapping multiplets in 1H NMR spectra?
0
Is this the NMR spectrum of 3-methyl-1-butanol?
1
Just looking for some help with finding relative ratios of components in a mixture using proton NMR