I have fond that similar question has been asked already (why don't carbons use sp3 instead of sp2 orbitals to make double bonds?), but I don't think it was formulated in a manner that was touching the concept I am interested in.

I would like to know is it reasonable to consider double and triple bonds as result of overlapping solely sp3 hybridised orbitals. I imagine that alternative view on carbon-carbon double bond in ethene could be that two pairs of sp3 hybridised orbitals from each carbon overlap - giving four molecular orbitals, two of which would be bonding and fully occupied while other two would be empty. Moreover, geometry of such constructed double bond would be correct as all four hydrogen atoms bonded by remaining four sp3 orbitals from the two carbons would be coplanar (together with these two carbon atoms as well) and length of the bond would also be shorter than for single bond. I believe that similar case could be made for carbon-carbon triple bond.

Below I am presenting you a simple figure I have made to graphically demonstrate the idea. 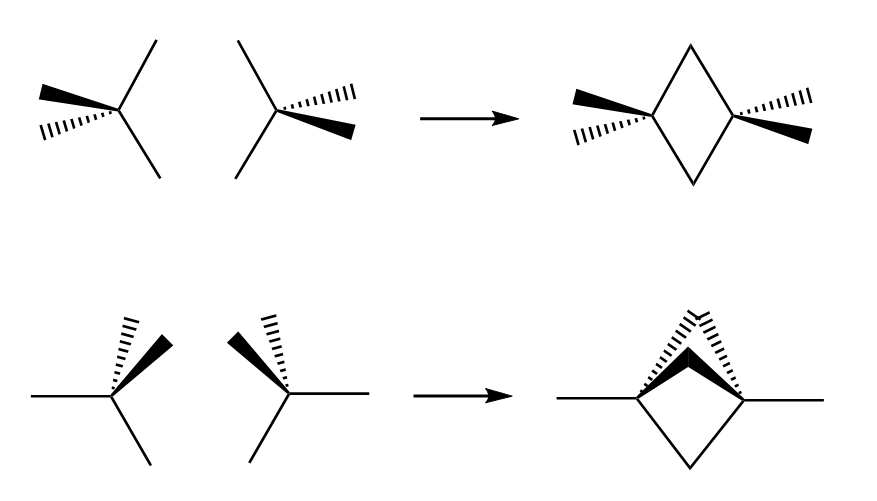 I do recall seeing this concept is some textbook being presented as legitimate thing, I do not remember where it was, unfortunately.

Could you please explain it to me if this concept is reasonable idea, and if not - then why not? It would also be great to know how does energetic levels in such instance compare to the system with multiple bonds created by overlaps including hybridised and nonhybridized orbitals. (The one thing that appears in my mind is that in commonly accepted version of multiple bonds there is sigma bond that has electron density directly between nuclei making this arrangement more favourable. However, there are systems like two electron three centre bonds, as in B2H6, in which three centres are hold in similar arrangement to discussed above)

Browse other questions tagged bond orbitals hybridization or ask your own question.

17
What utility does the Tau bond model of orbital overlap have?
25
Why can there not be more than one sigma bond in a set of bonds?
0
why don't carbons use sp3 instead of sp2 orbitals to make double bonds?

79
Bonding in diatomic C2, a carbon-carbon quadruple bond?
6
Is this textbook bonding picture of hybridization in ethene wrong?
4
Are the Phosphate and Sulfate ion diagrams with double bonds an invalid picture?
0
What are the height and width of the large and small nodes of the sp3 hybridized orbitals of carbon and silicon?
2
Orbital overlap and bond strength