What is the entropy of mixing a gas into the whole atmosphere?

Suppose I release 1 mole of pure argon into the atmosphere. What is the entropy of mixing? The equations I have found seem to only apply to the case of a fixed volume. Should I use an estimate of the volume of the whole atmosphere? Some sort of infinite approximation?

Performing an actual calculation could be quite complicated, even if we use the ideal gas approximation, because the atmosphere has enormous variations in both temperature and density.

To simplify the problem, let's think of the atmosphere as an ideal gas of uniform temperature and density. Then we need to determine how the entropy of the argon released into the atmosphere increases as a result of this release.

Since we're doing an ideal gas approximation, the argon doesn't "know" about the other atmospheric gases – the only thing that affects its entropy is the increase in volume. But, when doing an entropy calculation, we do need to account for the fact that the atmosphere already contains 0.93% Ar. Effectively, the presence of the existing argon removes a fraction of the configurational possibilities, since if we replace argon with argon, we don't change the entropy. Hence the entropy increase is calculated from the effective configurational volume that remains for the argon relased from the box.

Specifically, for the purpose of calculating entropy, the effective final volume for the argon released from the box is:

Proceeding, we start with the following general expression for a pure substance (again, the ideal gas approximation allows us to ignore the non-argon molecules):

If we additionaly assume the expansion is isothermal (i.e., T of the box is the same as that of the atmosphere--which we've already assumed is of uniform T) we obtain, for an ideal gas:

As you can see, releasing a mole of argon into the atmosphere will result in a significant entropy increase, once the argon is fully dispersed.

We can also calculate the corresponding free energy change using:

With the ideal gas approximation, there is no enthalpy of mixing, hence:

*This is all arbitrary, since we're unrealistically assuming constant pressure and temperature; but I needed to pick a number for the calculation, so I chose the top of the stratosphere ($50\ \mathrm{km}$). $94\ \%$ of the atmosphere's gases are found below this altitude, so about $94\ \%$ of the argon would end up there as well.

Then again, because of the logarithm, the choice of atmospheric volume doesn't significantly affect the calculation, as you can see if you compare my answer with Buck Thorn's. Indeed, even if we allow the argon to expand to fill the observable universe ($4 \times 10^{83} L$), this only increases $\Delta S$ and $\Delta G$ by a factor of four! [$\frac{83}{22}\approx 4$.] 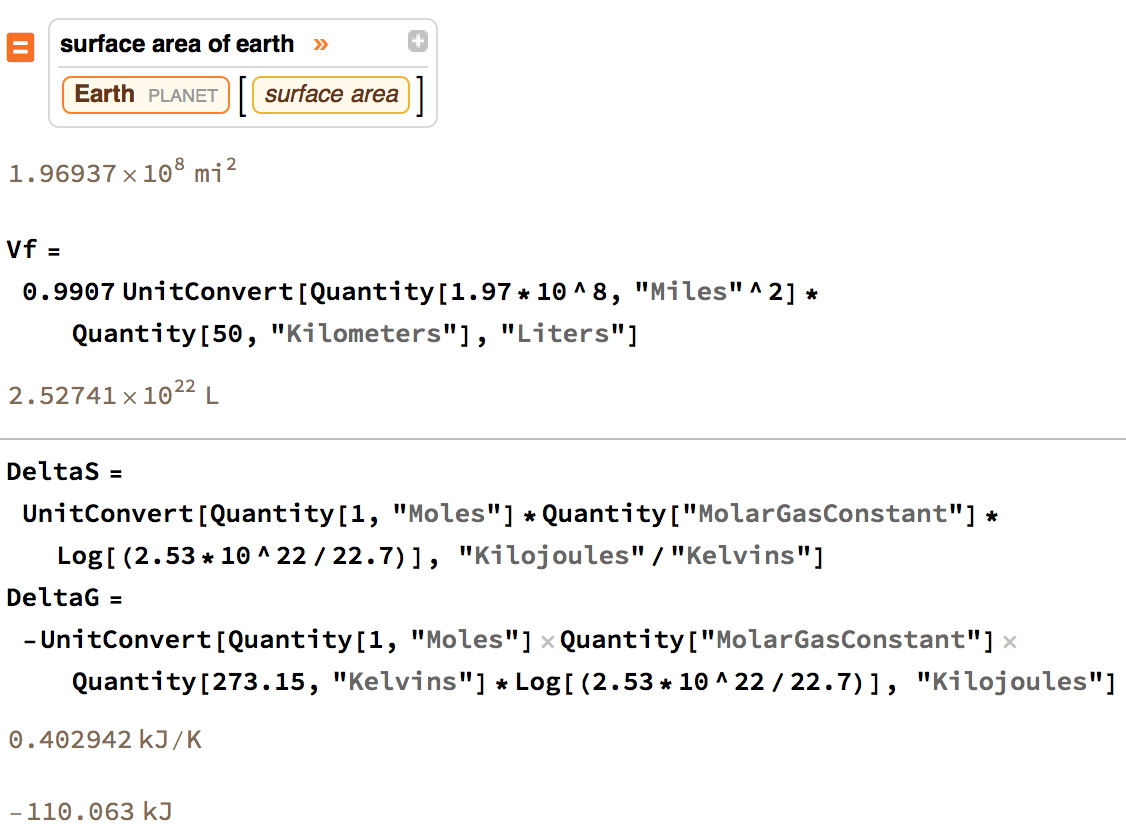 To compute the entropy change, assuming the process is isothermal, you need to know the initial volume of the gas, in addition to the approximate final volume. The entropy of mixing in this case is nearly identical to the entropy change for the dispersed argon, since the volume increase for the atmospheric gases is negligible.

Using the above upper estimate of the atmospheric volume, we now need an estimate of the volume in the argon vessel. If the molar concentration is assumed identical in the atmosphere and in the argon vessel, and using an estimate of $\approx\pu{29 g/mol}$ for the average molecular weight of the atmospheric gas, then the initial volume of argon can be estimated as $\approx\pu{ 0.024 m^3}$ (approximately the ideal molar volume at STP). Using the standard formula for the molar entropy change of an ideal gas under an isothermal expansion gives

Alternately considering the estimated mass of the atmosphere and assuming the final density to be uniformly $\pu{1.2 kg/m^3}$ then the relevant final volume is $\approx\pu{ 4.3e9 km^3}$. Then the standard formula for the entropy change gives

Clearly the very different estimates of the final volume of the atmosphere do not result in a great difference in the final estimated entropy change. You can thank the logarithm for that.

Not the answer you're looking for? Browse other questions tagged entropy mixtures or ask your own question.

4
How to calculate the partial pressure of oxygen in this mixture of oxygen and argon?
15
Entropy - “Wiggle”?
6
Determining weight-percent methanol in water from specific gravity and temperature
2
What is the CO2 content in the air in a compartment of air and water, as a function of temperature?
10
Entropy change in an adiabatic expansion
1
Entropy change of surroundings and system
1
Entropy change during irreversible process