The answer here gives the reason that a carbon atom is more electronegative than a hydrogen atom and hence it should increase the −I effect (the answer also talks about bond length but I think it's irrelevant to mention that). But wouldn't the inductive effect shown by the whole group be a better parameter than the electronegativity of its primary atom to judge its electron withdrawing/donating ability?

Then there are also examples where replacing hydrogen atom by an alkyl group reduces the negative inductive effect of the substituent, as with $\ce{-CHO}$ and $\ce{-CRO}$ groups. I would usually explain it using the +I effects of $\ce{-R}$ and $\ce{-H}$ groups, but since that logic doesn't hold for the previous case, there should be some other reason for it.

So my question is: How does replacing an H atom in a substituent by an alkyl group affect the inductive effect of the substituent?

P.S. There is a related question, but it is too specific and does not have an answer to my question.

To analyse the inductive effect, let's take the groups attached to a hydrocarbon chain and then see. 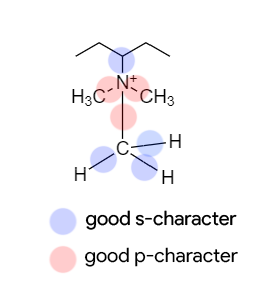 The $\ce{C-H}$ bond orbitals will have more s-character than in the $\ce{N-C}$ bond orbitals because there is more electron-density in the former due to the greater electronegativity of carbon over hydrogen and nitrogen over carbon, which requires the presence of more, lower-energy s-character in them to lower the system's overall energy. Thus, an implication of this would be the increase of p-character in the three $\ce{N-C_{Me}}$ bond-orbitals and the subsequent decrease of p-character in the $\ce{N-C_{chain}}$. This results in an increase of electronegativity of $\ce{N}$, thus the (-I) trend is:

Part II: I don't know what to call this (Need help with this)

It is considered that the inductive effect of $\ce{-CH3}$ is mainly attributed to its hyperconjugative effect. However, hyperconjugation requires an empty p orbital carrying a positive charge into which it donates its $\sigma_{\ce{C-H}}$ bond-electron density. However, nitrogen's orbitals are sp³ hybridized here, with no empty orbital carrying the charge as such. So, I think (not really sure*), we should only consider carbon's greater electronegativity over hydrogen, thus making $\ce{-NMe3^+}$ more inductively electron-withdrawing than $\ce{-NH3^+}$. You can also apply this to $\ce{-OR}$ and $\ce{-OH}$.

* Just saw Jan's answer in the middle of my writing process. That makes this a valid point. Great answer, a must check-out.

Not the answer you're looking for? Browse other questions tagged organic-chemistry electronegativity inductive-effect or ask your own question.