Why does the binding of DMSO to metal via the S atom (k-S) strengthen the S=O bond?

But how is this possible? The sulfur is already electron deficient due to the strongly electronegative $\ce{O}$, and should be a $\pi$-acceptor, and accept electrons from metal into the $\pi^*$ orbitals. This means that the $\ce{S=O}$ bond should also be weakened in this case. But this does not happen. Why? Does it have something to do with the molecular orbitals of DMSO?

[Note: According to this post, the $\ce{O}$ is mainly $\pi$-donor and the $\ce{S}$ $\pi$-acceptor for DMSO, and I agree with the argument in that answer. But it does not say anything about the strengthening of the $\ce{S=O}$ bond in $\ce{S}$ bonded complexes.]

The pictures of HOMO and LUMO of DMSO respectively: 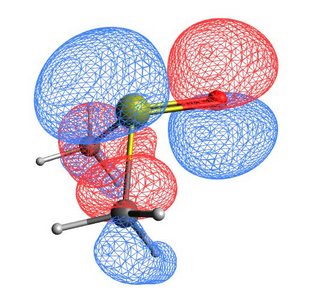 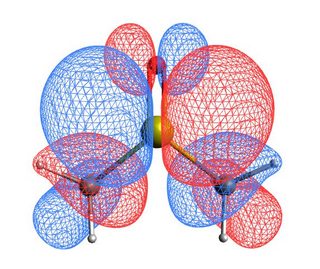 The confusion seems to arise from the incorrect statement that the S-O bond has pi character and that there exist $\pi$ and $\pi^*$ molecular orbitals in DMSO. Instead, DMSO (despite the way it is often drawn) is most accurately depicted as having three single bonds and one lone pair on the the S atom (clearly visible as a dominant element in the HOMO shown in the question). The trigonal pyramidal geometry (also shown in the question) is consistent with this description.

The S-O bond is a dative bond, meaning that the S atom provides both electrons rather than having one electron come from each atom. That results in a formal positive charge on S and negative charge on the O. The O therefore is best represented as having one bond (to S) and three lone pairs, similar to the oxygen atom in an alkoxide ion. Because of the charge separation, the S-O bond also has a strong ionic component.

[Aside: so-called hypervalent sulfur compounds are typically drawn with double bonds that are actually combined sigma + ionic bonds rather than sigma + pi bonds. DMSO is not the only one. Keep this in mind in the future when trying to understand properties of sulfur-containing molecules.]

We now consider what happens when DMSO interacts with a transition metal. Similar to the O of an alkoxide ion, the O atom in DMSO can interact with metals as both a $\sigma$ and $\pi$ donor because of the multiple lone pairs. Both the $\sigma$ and $\pi$ donations result in decreased electron density on O, reducing its charge and weakening the S+/O- ionic interaction. The weaker ionic interaction means that the bond overall weakens, consistent with the decrease in the observed stretching frequency. There is no need for an S-O $\pi$ interaction to exist in order for this to happen.

If instead the S atom interacts with the metal, it does so primarily as a $\sigma$ donor via its one lone pair. There may be capacity for a $\pi$ acceptor interaction with $\sigma^*$ orbitals, as has been proposed for ligands such as triphenylphosphine, but if this occurs, it is with the $\sigma^*$ orbital associated with the S-C bonds, not the S-O bond, consistent with the LUMO shown in the question, which has a large contribution from the py orbital on S (ie the p orbital in the plane of the C atoms). Thus there is no weakening of the S-O $\sigma$ interaction due to $\pi$ acceptance.

As long as the $\sigma$ donation is stronger than the $\pi$ acceptance (which is what we expect), there is a net loss of electron density from S, which further increases the positive charge on the already electron deficient S atom. Increased charge means an increased strength in the ionic S+/O- interaction, so the S-O bond overall is stronger, consistent with the observed increase in the S-O stretching frequency.

Not the answer you're looking for? Browse other questions tagged coordination-compounds molecular-orbital-theory ir-spectroscopy or ask your own question.

11
IS DMSO-o a σ-donor, a π-donor, or both?
6
Assignment of the IR spectrum of 2,4-pentanedione (acetylacetone)
0
What is the binding mode of the ligand in complexes with quadruple metal-metal bonds?
7
How to interpret the relation between CO stretch frequencies and backbonding strength for polycarbonyl compounds?