Organophosphorus compounds are known to inhibit the enzyme acetylcholinesterase (AChE). This occurs when the OPC phosphorylates the serine-203 residue of the enzyme. If the enzyme is not reactivated in time, a second reaction occurs, whereby one of the alkyl groups on the OP molecule is hydrolyzed off, giving the alcohol and the phosphorylated serine residue. The hydrolysis reaction also protonates the nearby Histidine-447 at the active site of AChE, forming a salt bridge between the OP and the enzyme. This is called "Aging", and makes the inhibited enzyme resistant to activation even by oximes. Depending on the OPC in question, the aging reaction can take between a few minutes (In the case of Soman) to several hours (In most cases). Here is a figure explaining the reaction: 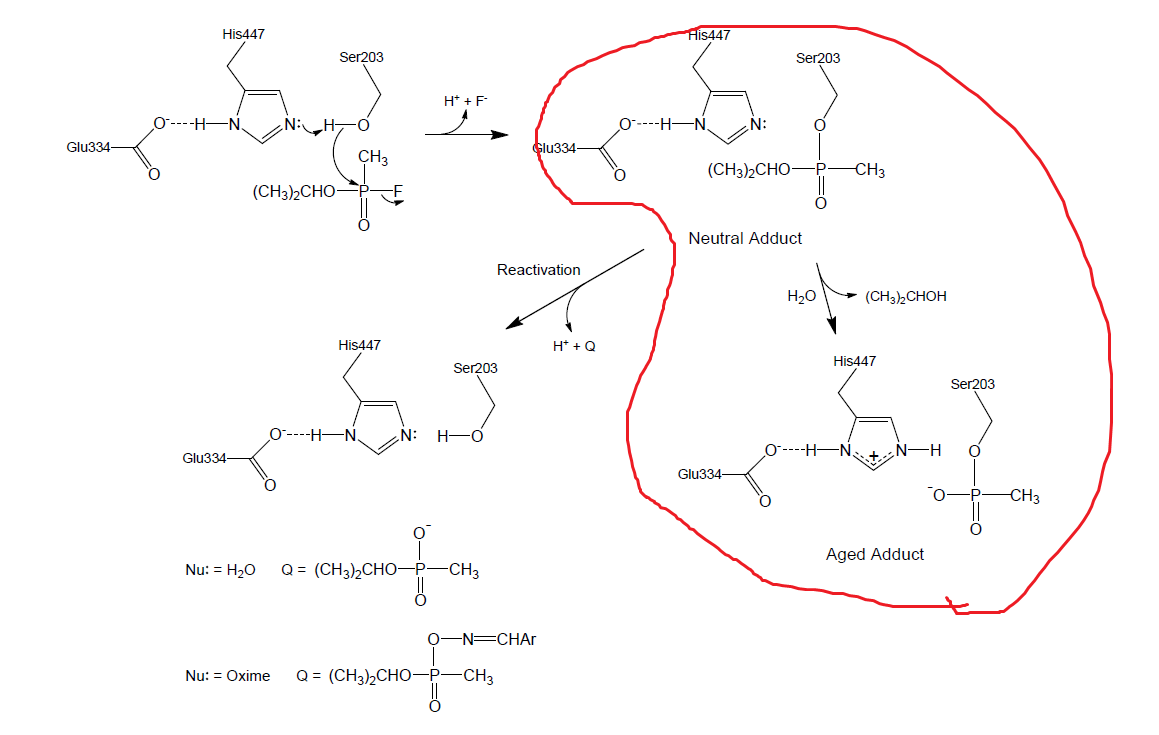 The part which I have circled in red depicts the aging reaction. Firstly, is the information which I have found thus far correct? Secondly, If an organophosphorus AChE inhibitor which already contained a hydroxyl group, such as EA-2192 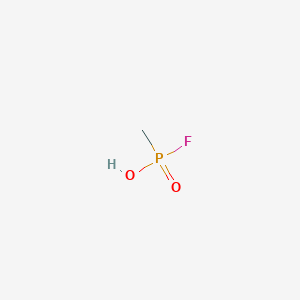 were to inhibit AChE, how long would the "Aging" reaction take? My guess is that aging would occur even faster (Seconds to minutes) due to the OPC itself being capable of acting as a proton donor, and thus leading to the formation of the salt bridge without any additional hydrolysis needing to take place beforehand. However, I have not been able to find any information on this particular matter, and so that is just pure speculation. Has any research been conducted into this? Is my speculative guess likely to be correct?

Acetylcholinesterase is important enzyme and its mechanism of function is well known. In active site, it has two pockets: anionic pocket (to attract positively charged Quaternary nitrogen of choline) and esteric pocket. The esteric pocket consists of a serine side chain (a $\ce{-CH2-OH}$ function) as depicted in following cartoon, which pacilitate the deseterification of acetylcholine to choline: 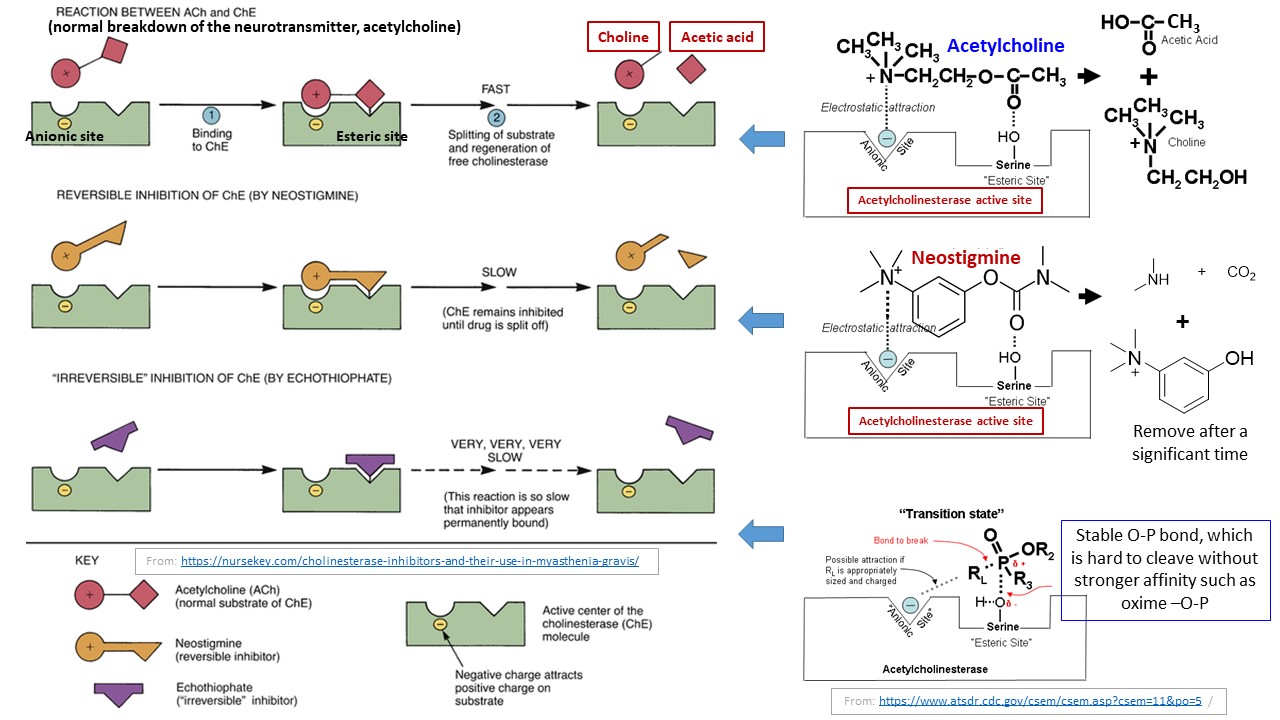 The neurotransmitter, acetylcholine bound to this pockets and $\ce{-CH2-OH}$ function of serine attracts carbonyl group of acetyl group as depicted. As a result, choline group will be released and acetylated serine group would then release acetyl group as acetic acid in a moment by hydrolysis to reactivate the enzyme.

However, if you introduce a competitive inhibitor such as neostigmine (which is a reversible inhibitor), it would bind to some of enzymes and decelerate the enzyme for designed time (e.g., use of this phenomena as a medical treatment). Once the inhibitor was released in an extended time period, enzyme will be reactivated.

Yet, there is a group inhibitors called irreversible inhibitors (and commonly known as suicide inhibitors because they kill the enzyme while get killing themselves), of which do not leave the active site once bound, unless an antidote is introduced. One group of such inhibitors are called nerve reagents (a.k.a. nerve gases). All most all of nerve reagents are organic phosphorus reagents, which consist of a good leaving group such as fluoride (e.g., Soman and Sarin). The suicide-type inhibition of a nerve reagent is depicted in following diagram (The $\ce{-OR_L}$ group here represents a good leaving group): 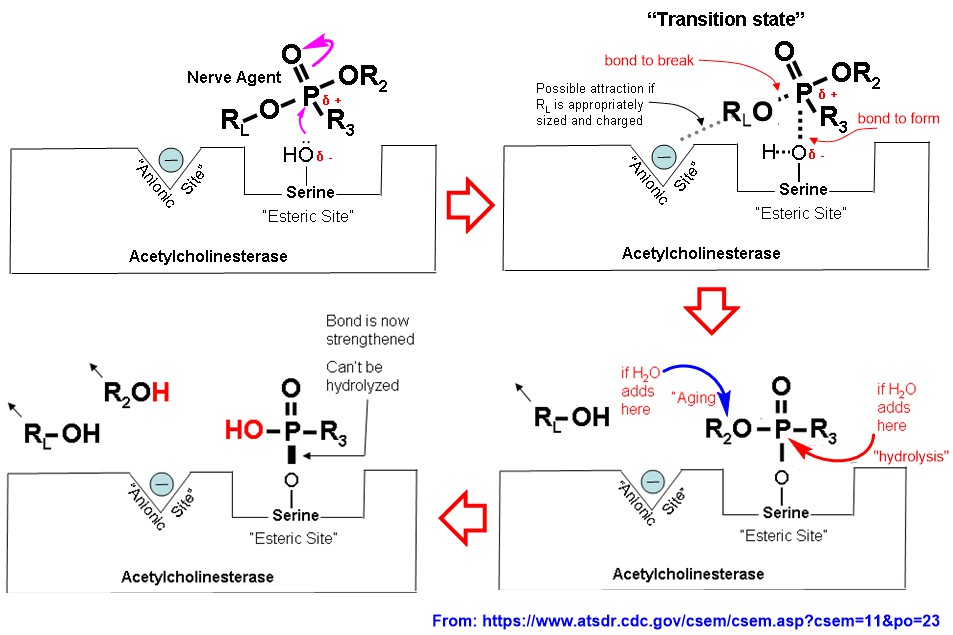 For nerve gases such as Soman and Sarin, the leaving group is fluorine atom, which leaves as a fluoride ion ($\ce{F-}$). The strong attraction of phosphorous in nerve reagent to Ser$\ce{-OH}$ group causes $\ce{P=O}$ to break. Reformation of $\ce{P=O}$ bond would have made unacceptable hexavalent phosphorus. To avoid that scenario, one group on attached nerve reagent has to leave, and the best one available to leave is fluorine atom as $\ce{F-}$ (e.g., in Soman and Sarin). That leaves you with irreversibly inhibited acetylcholinesterase, which makes all chaos in central nerve system, until you receive an antidote (you should be given the antidote before infected enzyme goes to the next step, aging). The mechanism of the action of antidote (e.g., 2-PAM) is well documented and been illustrated in following diagram: 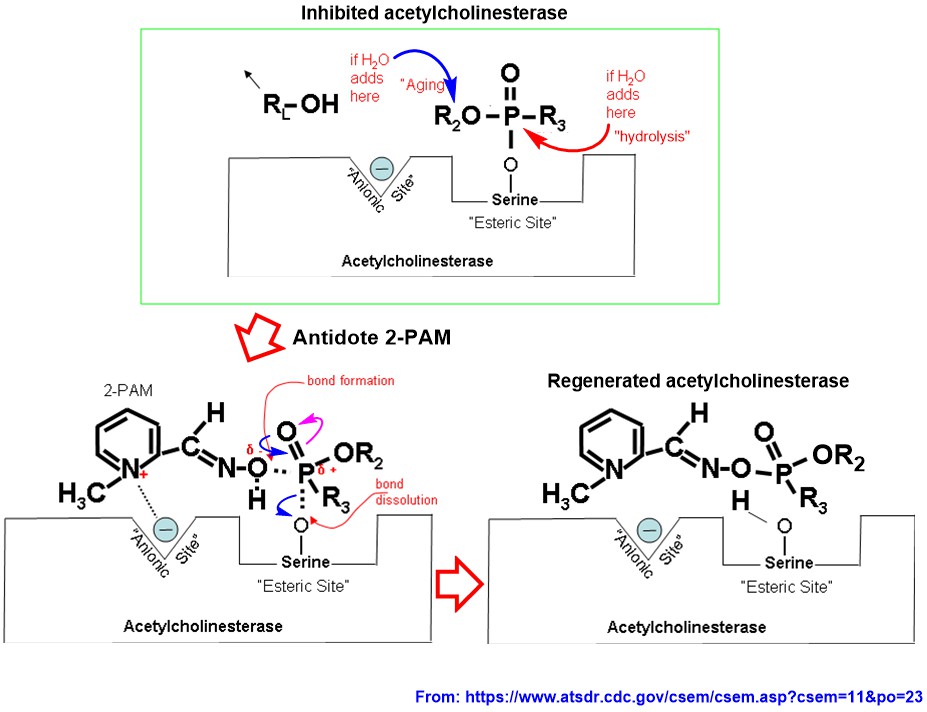 2-PAM has high affinity for anionic site (which is free now; see diagram) of the enzyme because it consists of part of nicotine moiety (searh for nicotinic receptor description). Once bound to free anionic site, oxime$\ce{-OH}$ has high attraction for phosphorous atom in infected enzyme site by the proximity. This attraction causes $\ce{P=O}$ to break (see pink arrow). Reformation of $\ce{P=O}$ (see blue arrows) would have again made hexavalent phosphorus. Again, to avoid that scenario, one group has to leave, and the best one to leave is ser$\ce{-OH}$, leaving the free enzyme (note that, all bond making and bond breaking in the active site here are in equilibrium, but once Ser$\ce{-O-P}$ bond is broken, the elimination of 2-PAM bound-phosphorus moiety is faster compared to regeneration of same Ser$\ce{-O-P}$ bond).

The aging depends on how easy to hydrolyze the $\ce{O-R2}$ bond by a water molecule. At least, this bond in Soman, $\ce{R2OH}$ of which is Pinacolyl alcohol (3,3-Dimethyl-2-butanol), can be easily hydrolyze by water in few minutes. This mechanism was studied and following mechanism was given (Ref, 1): 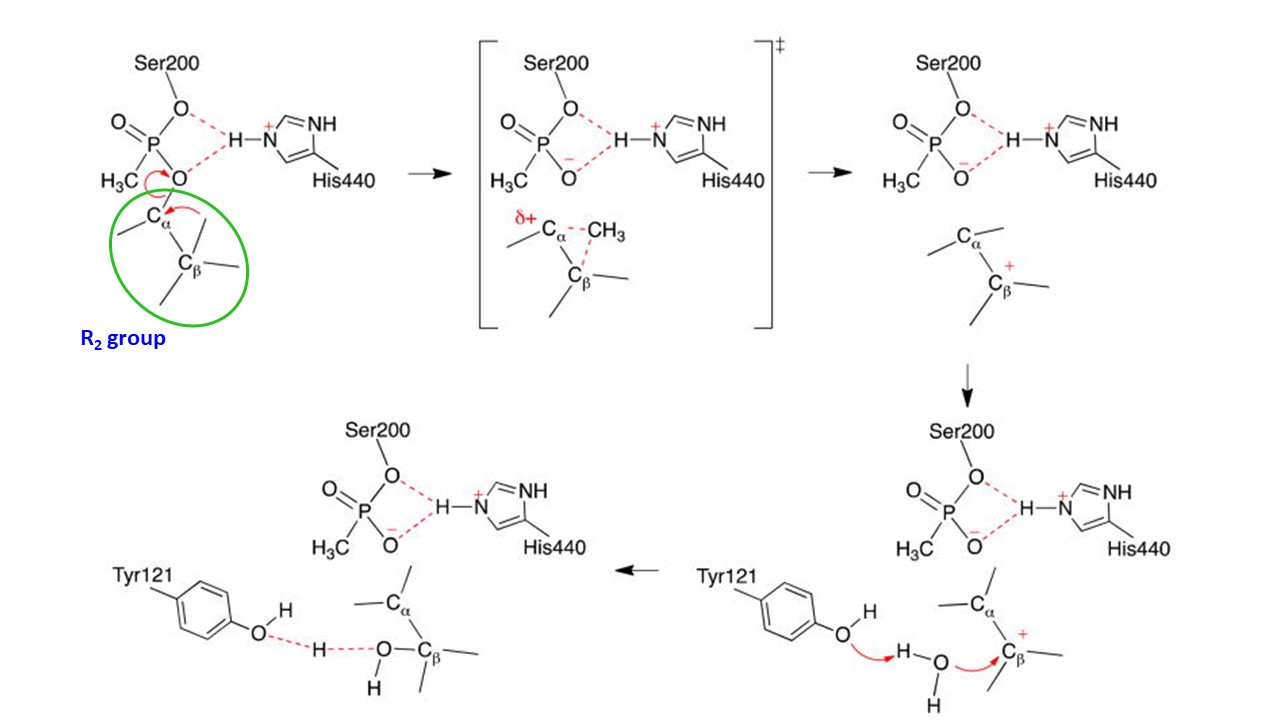 In Sarin, the $\ce{O-R2}$ group is the $\ce{O-CH(CH3)2}$, which would not be hydrolyzed as easy as that in Soman. Thus, for sure, aging of Sarin infected enzyme would take more that minutes, perhaps hours.

The given mechanism is supported by the study of different group on another nerve reagent Tabun, the initial leaving group of which is cyano group (as $\ce{CN-}$ compared to $\ce{F-}$ in Soman) to effect acetylcholinesterase (Ref.2). Aging of the effected enzyme is caused by leaving of ethyl group from $\ce{P-OCH2CH3}$ function ($\ce{-OR2}$) in similar manner to Soman-effected acetylcholinesterase:

Matthew's answer corrected some mistakes which I have made in asking my question. His answer also suggests that OP compounds that contain hydroxyl groups would indeed cause instant aging of inhibited cholinesterase.

I have found confirmation that that is indeed the case. There is a naturally-occurring organophosphate that contains a hydroxyl group, formerly known as Anatoxin-A(s), but now known as guanitoxin. 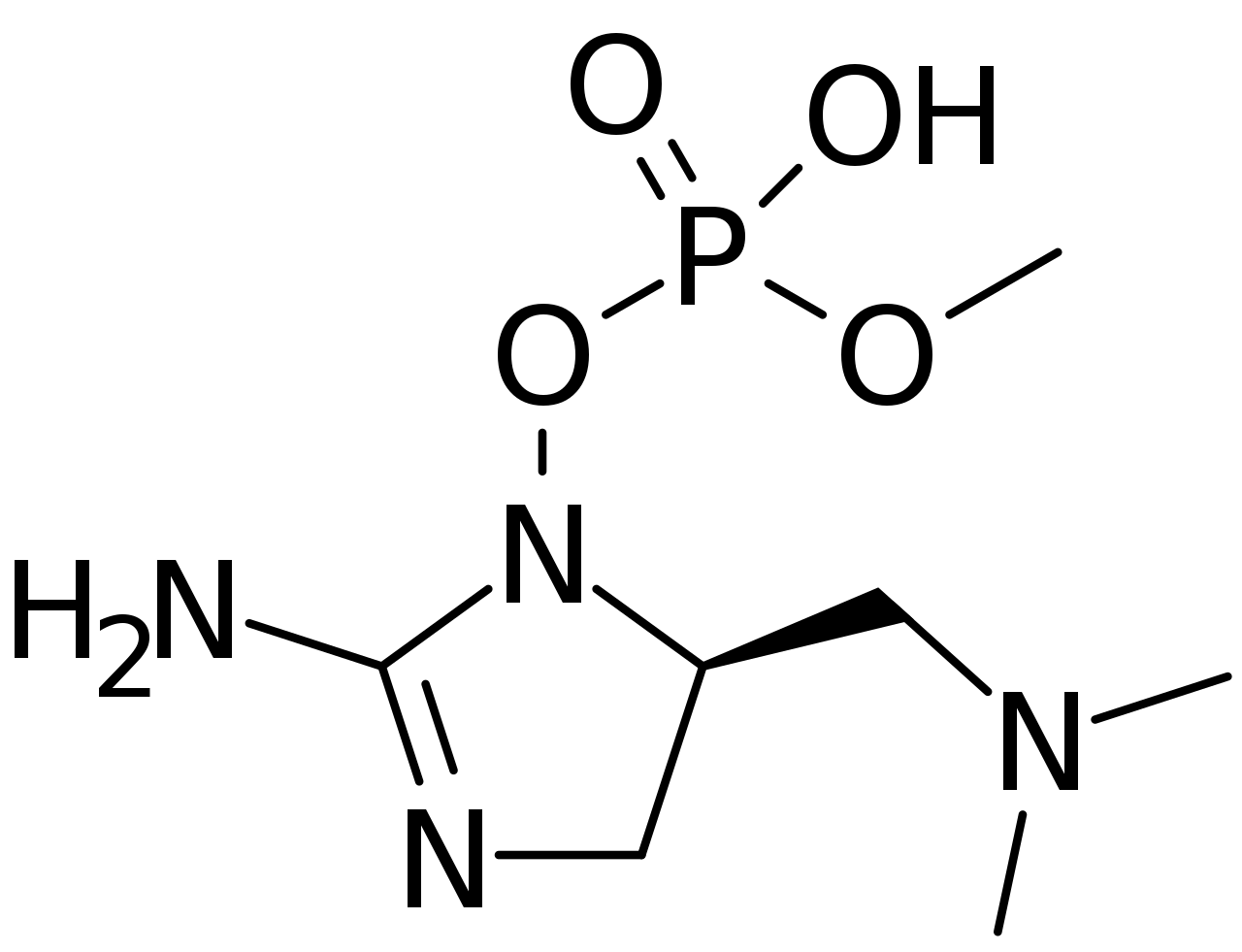 A study was done regarding the efficacy of oxime reactivators against AChE inhibited by guanitoxin. It was found that acetylcholinesterase inhibited by Guanitoxin is resistant to reactivation by oximes and that Guanitoxin does, indeed, cause instant aging of the enzyme.

Reiter and others have also studied the binding of EA-2192 to AChE and have found that it likewise causes instantaneous aging of the enzyme. This would make sense, since the adduct between AChE and an OPC containing a hydroxyl group bonded to the phosphorus atom is identical to an aged adduct. It would follow that other OPCs containing an OH group bonded to the phosphorus atom would also instantly age the enzyme.

1
Why does a silane group react with hydroxyl groups?
5
Is viscosity proportional to the number of hydroxyl groups?
3
What makes sulfur-containing compounds such good antioxidants?
1
Reference request - Nomenclature of organophosphorus compounds?
18
Are compounds containing active methylene groups positive for the haloform test?
3
Can aged acetylcholinesterase be reactivated?
4
Oxidation of hydroxyl groups of glucose