Different force constant in ground vs excited state in spectroscopy

I know that the formula for calculating $k$ is:

What causes this difference?

Is it that the energy difference for the ground state is greater then that of the excited state and so the force constant is also greater?

At the risk of providing a somewhat circular answer, in the harmonic approximation of an interatomic potential, the force constant is a measure of the force of attraction between the atoms (in a classical description they would obey Hooke's Law $|\vec{F}|=-k(x-x_\circ$)). The answer to the question is therefore that the attractive interatomic force in the electronically excited state of $\ce{I2}$ is weaker than in the ground state.

The following figure from Ref. 1 illustrates the potentials in the ground and excited states: 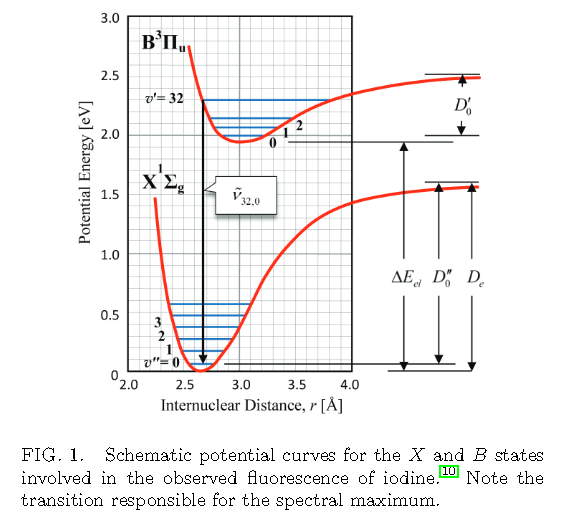 The potential in the excited (upper) state is broader. In the Morse functional approximation, the potential has the form $$V(r)=D_e\left(1-e^{-\beta(r-r_\circ)}\right)^2$$

A smaller force constant results in a smaller value of $\beta$ and a broader potential well. This fits nicely with the results noted in the OP and the above figure (the equations are also outlined in the accompanying text). The energy accompanying a vibrational transition is proportional to the square root of the force constant and therefore inversely proportional to the width of the potential well. This is analogous to the behavior observed for a QM particle in a box, wherein the spacing between energy levels narrows as the box size increases. Working backward from vibrational transition energies leads to the conclusion that smaller transition energies are associated with greater oscillatory amplitudes (broader potentials) and smaller harmonic force constant estimates.

Not the answer you're looking for? Browse other questions tagged spectroscopy uv-vis-spectroscopy or ask your own question.

1
Why does Stokes raman not relax to the ground state while anti-Stokes does?
20
What is a virtual state?
8
Spectroscopy of excited state lithium
2
Why is the force constant for double and triple bonds approximately double and triple of that of a single bonds?
3
Restrictions on transitions in Spectroscopy
1
Are we using an assumption in calculating the ratio of first state excited to unexcited chemical species using the Boltmann distribution?
1
What is the maximum number of emission lines when the excited electron of a H atom in n = 6 drops to ground state?
2
Photodissociated iodine laser and population inversion