Is there a way to create natural Red food coloring from Turmeric in the house kitchen?

As a non chemist I have read in the Wikipedia article Curcumin that:

This text appeared without source under this image in the article:
https://en.wikipedia.org/wiki/Curcumin#/media/File:Curcumin_thin_lipid_film.jpg

As an amateur of cooking Indian dishes (which often have bright red "Tandoori" color):

Is there a way to create natural Red food coloring from Turmeric in the house kitchen?

That is to ask; what edible supermarket products contain phospholipid films and how should I use at least one together with Turmeric (fresh-grinned or dry-powdery) to get a bright red solution?

I should note that I didn't intend to ask this question as a "how to make Tandoori colored seasoning paste" question;

About six years ago, I was told by the owner of a large Indian restaurant in Israel, what is the secret (or at least one of the secrets) and the following seems to be that secret from what I understood then and did and replicated several times:

1) Take about 500 gram of dried Kashmiri peppers; clean them from pedicel, placenta and seeds.

2) Put the dried Kashmiri peppers in a metal pan and pour boiled water upon them.

3) Let the dried Kashmiri pepper boil and cool ("water-marinate") about 3-6 hours but don't cook them. Mere boiling, without cooking, enhances pigmentation but doesn't destroy some pigments as in cooking.

4) Remove the water and let the peppers dry.

5) Grind the processed peppers into a paste with a bit of water and cooking oil and add a tablespoon of that paste as a basis for any Tandoori paste you are making (along with salt, lemon, garlic, ginger and possibly other spices).

Curcumin(the active ingredient in Turmeric) can turn red in two ways: Either by acting as an acid-base indicator or by forming a complex with a phospholipid film, as you stated.

Colour change due to Acid-Base action

The curcumin molecule is a tribasic acid in basic solution, where it exists as its enol tautomer. The loss of one or more protons from the phenolic hydroxyl groups convert the benzene rings into their quinonoid form, which have a larger absorption/emission wavelength than the benzenoid form, giving a red colour. 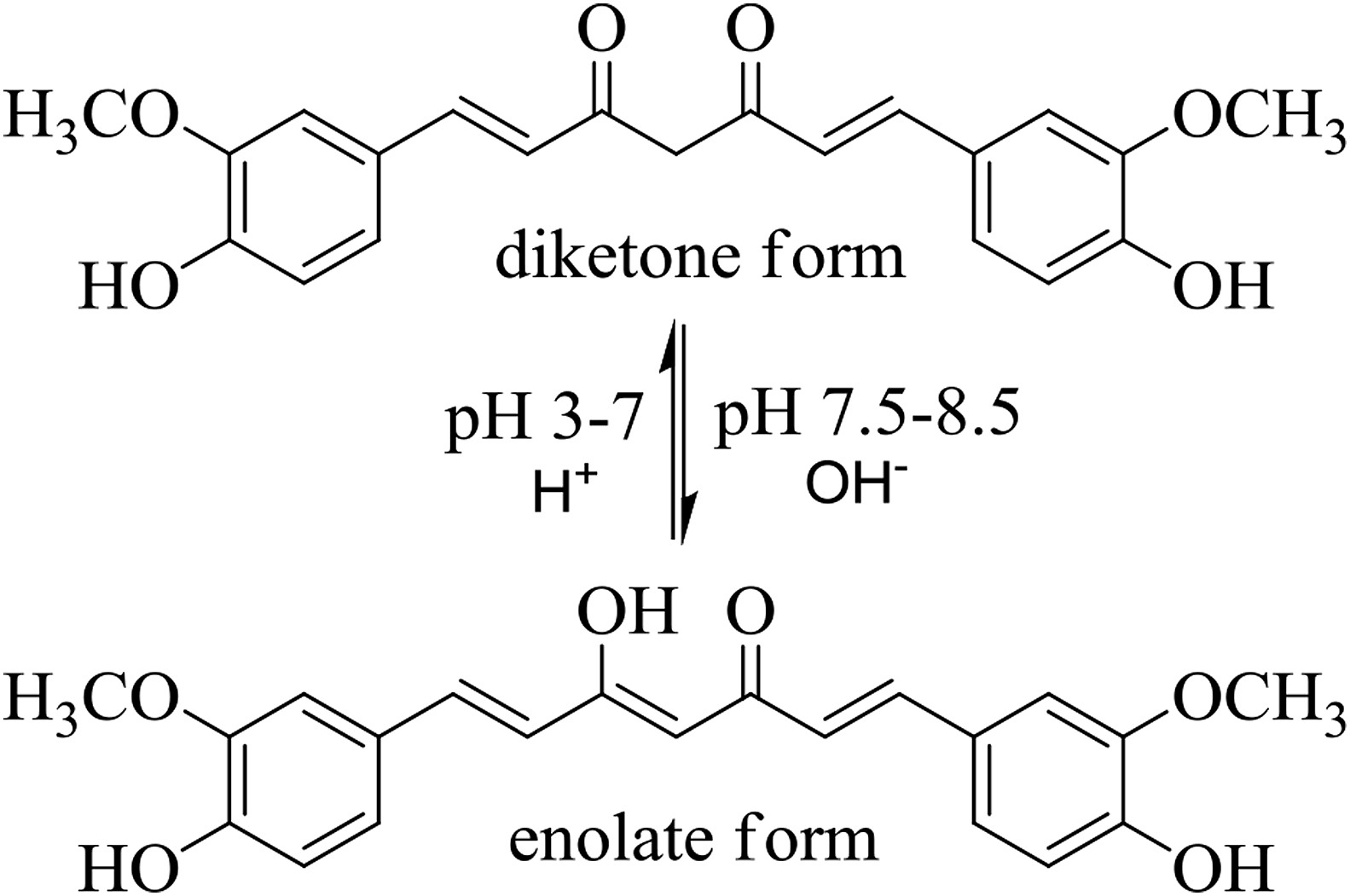 This indeed works experimentally: a paper highlighting this can be found here. A simple home experiment would also suffice 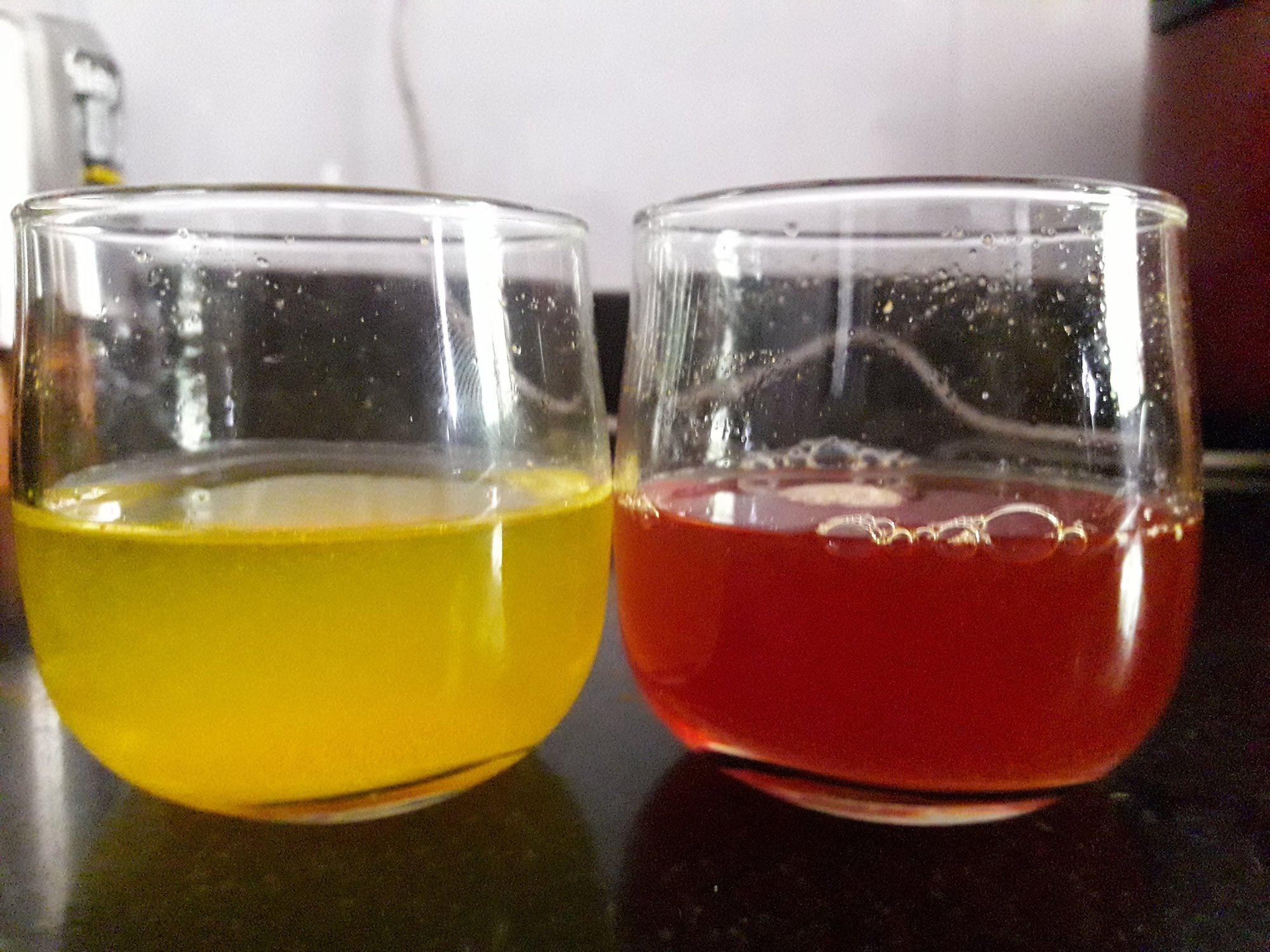 The left one is a suspension of turmeric in water; the right one is the same suspension, but with a few drops of soap added to it, which make the medium alkaline and cause the turmeric to turn red. Unfortunately, around my kitchen, I could not find an edible compound basic enough to cause turmeric to change colour. Lime is a possible compound that I could test with but I don't have any foodgrade lime powder lying around. Another issue with using this colouring is that any acidic medium will revert the colour back to yellow: this means that sprinkling lemon as garnishing on your dish would change the colour from an appetizing red to a dull yellow.

Colour change due to Phospholipid complex

A lot of papers have been released on this topic, such as this one and this one. The second paper mentions the following synthesis method to prepare curcumin liposomes (curcumin surrounded by a spherical membrane of phospholipid)

The MFGM phospholipids/soybean lecithin was dispersed in chloroform. Curcumin was dissolved in anhydrous ethanol and thoroughly mixed with the MFGM phospholipids/soybean lecithin dispersion in a 250-mL round-bottomed flask. The mixture solution was evaporated on a rotary evaporator at 35°C, until a thin film was formed on the flask. The film was washed with PBS and completely hydrated for 2 h. After the hydration of thin lipid film with PBS, the lipid dispersion was sonicated for 4 min, and finally the liposomes encapsulated with curcumin were obtained.

For cooking food, this above synthesis method seems unreasonable and overkill. I urge you to experiment with a few methods of forming the red curcumin-phospholipid complex yourself, with soy lecithin/eggs. I would have tried some methods out but I don't have these ingredients at home. see edit. 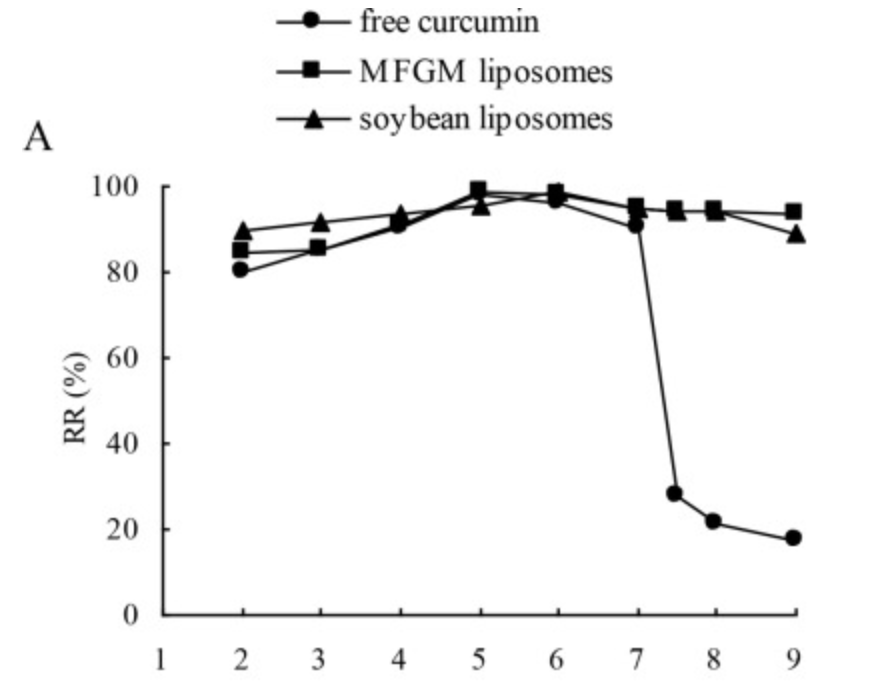 Seasoned Advice would probably give you would get a better answer in this field, but I'll drop in my two cents. Generally, chilli powder is used to provide the red colour to Tandoori. More specifically, Kashmiri chilli powder is specifically used for tandoor preparations, such as tandoori chicken and chicken tikka. This powder is applied as a dressing (in combination with oil, rice flour etc after cooking the food) and during marination (chicken is marinated with curd, red chilli powder and turmeric).

EDIT: I tried to make a phospholipid complex with turmeric and egg yolks in the kitchen. Around a teaspoon of turmeric was mixed with an equal amount of egg yolk and heated in a water bath: An orangish colour was observed, which was in contrast to the bright yellow of the egg yolk. (I scraped the top layer away which had a larger amount of turmeric to reveal the bottom layer, which had more egg yolk) 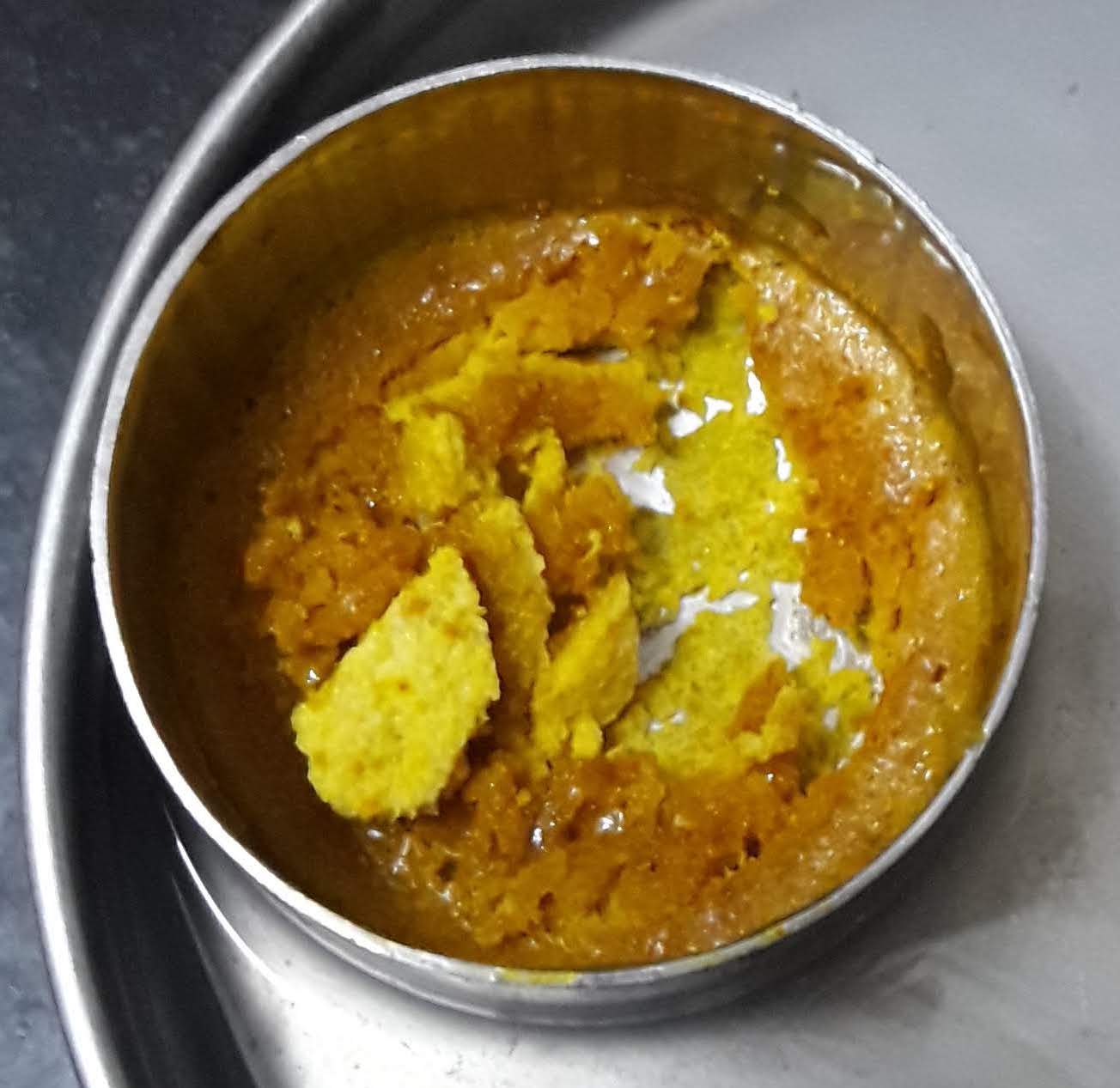 A possible conclusion that can be drawn from this experiment is that the complex is indeed forming, but the concentration of phospholipids/curcumin is too small to impart the magnitude of red colour required for food colouring. This pretty much conclusively proves that no easily made derivative of turmeric can be used as red food colouring.

Many foods have high phospholipid content. Eggs and soybean have comparatively high amounts, for example. Phopholipids are essential components of all cell membranes, and are in virtually all living things. They function as emulsifiers, one side of the molecule adhering to water (hydrophilic), and the other to fats (termed lipophilic or hydrophobic).

So I suggest you to try mixing the turmeric with eggs or soybeans or plain lecithin and to let us know if the color changed to an appealing red! Or, as others stated, use some alkali, such as baking soda, though that certainly would change the taste.

Some common materials you might have at home are baking soda (sodium bicarbonate) or washing soda / soda ash (sodium carbonate). Adding them to hot water + turmeric makes a solution that stays bright red for quite a while (as others have said, it will revert over time, but in my experience with dying fabric it's a matter of several hours, so it won't affect food you use in the space of a meal). Avoid using lemon or anything acidic because that will send it back to yellow (even if there's baking soda in it). If you add a small spoonful of baking soda, the flavor won't really be influenced (especially if you're using other spices with a strong taste). 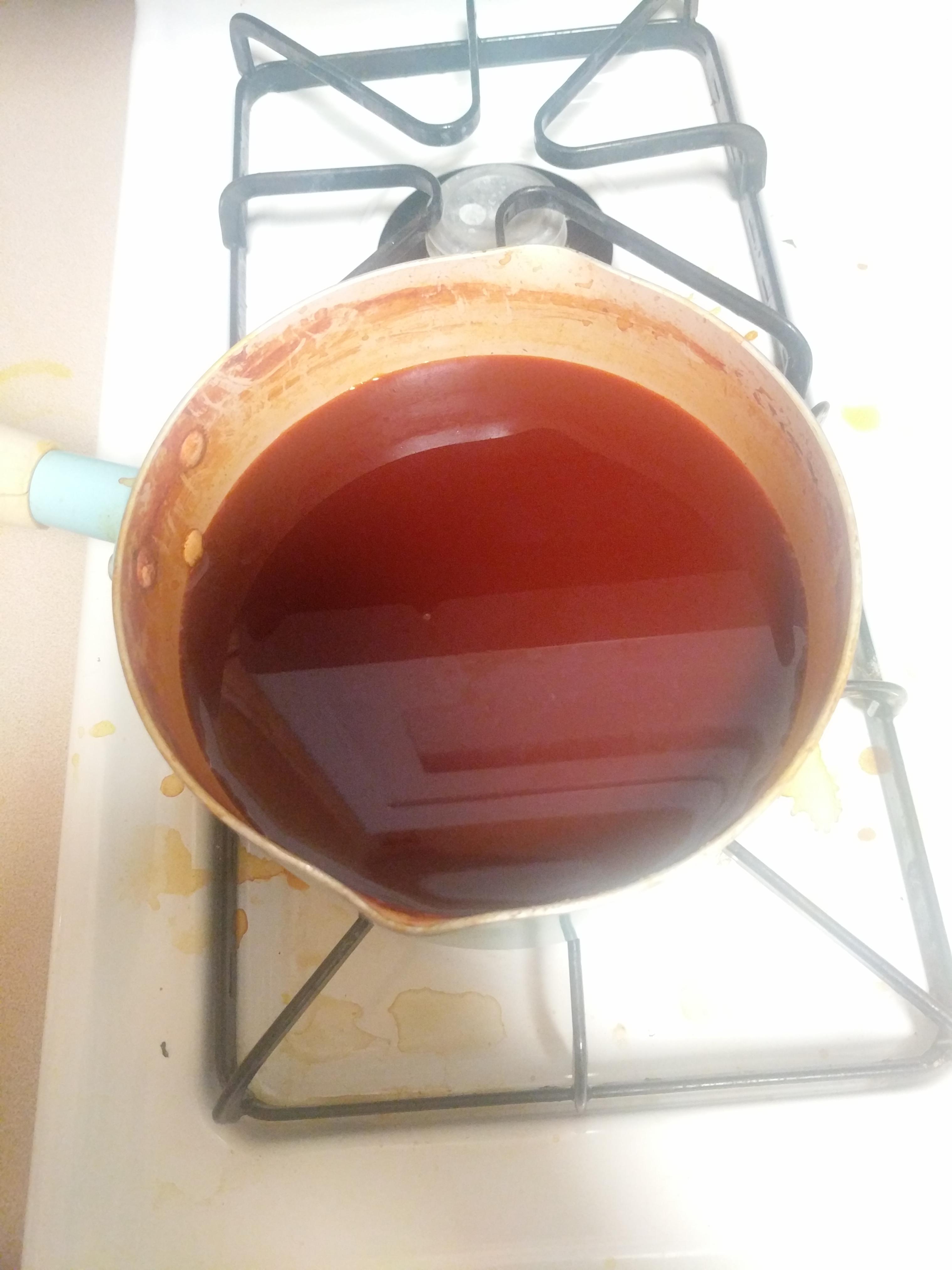 2
Remove formalin from food using chemical found in kitchen
6
Is it possible to remove salt from food without changing the flavor?
10
Is there any food-safe way to break down capsaicin (chilli) so food is less spicy?
3
Is there a way to concentrate the vitamin content of a particular food?
1
Is there an easy way to make PVC from PVA?
1
Which coloring agents are responsible for the color in red tea and yellow tea?
9
What is the simplest way to create a precipitation reaction at home?