Fractional index in a chemical formula of metal oxide

I didn't realize what the difference is between $\ce{WO3}$ and $\ce{WO_{2.9}}$ and where these ions come from that they talk about in this part of the article. I also don't understand what a fractional index means in a chemical formula. Could you help me to interpret that part of the article and explain these doubts that I have please?

There is nothing special about fractional indices in chemistry, it is just a pointer signifying we are dealing with a non-stoichiometric compound. Group 6 metal are known not only for their regular oxides existing in numerous polymorphic modifications, but also for forming homologous series of nonstoichiometric oxides $\ce{\ce{M^{VI}_nO_{3n-1}}}$ and $\ce{\ce{M^{VI}_nO_{3n-2}}}$ with the general formula $\ce{M^{VI}O_{3-x}}$ $(\ce{M} = \ce{Mo}, \ce{W};$ $x \in (0; 1)).$

Now, to make things clear, notation "$\ce{WO_{2.9}}$" does not refer to a molecule; $\ce{WO_{2.9}}$ is a formula unit showing composition of a network solid. To further illustrate the origin of the fractional coefficients here, let's refer to the crystal structures of the stoichiometric and non-stoichiometric tungsten(VI) oxides $(\ce{WO3}$ and $\ce{WO_{2.9}},$ respectively).

Depending on the temperature, $\ce{WO3}$ adopts several polymorphs with various crystal structures; at the room temperature the most common structure it adopts is the one of distorted $\ce{ReO3}$ type, being made of tilted $\ce{[WO6]}$ octahedra cross-linked via the corners (for the illustration, see e.g. Wikipedia).

On the other hand, $\ce{WO_{2.9}}$ is an oxygen-deficient compound in comparison. To account for that and eliminate the presence of point defects, crystal structure undergoes a transformation resulting in increased number of edge-sharing groups of $[\ce{WO6}]$ polyhedra and reduced number of the corner-sharing ones, e.g. the structure gets more "packed", and, more importantly, a crystallographic shear is introduced (which is not an impurity). Let's have a look at the asymmetric unit of $\ce{WO_{2.9}}$ of the crystal structure determined by Magnéli [1]: 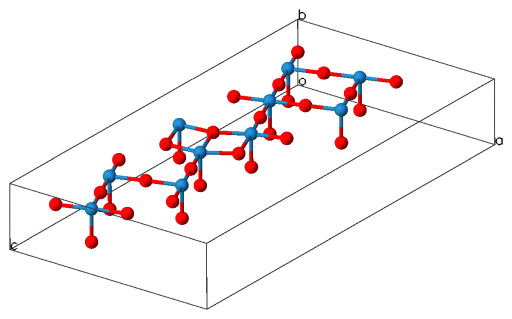 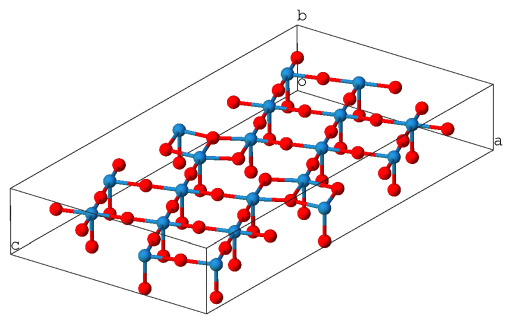 Finally, to illustrate the location of the aforementioned shear plane, let's complete coordination shells on all tungsten atoms and view the structure along the $b$ axis: 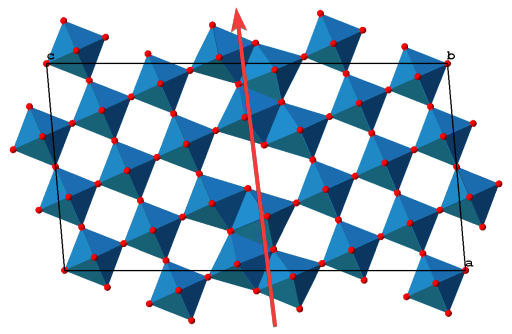 As for the assignment of the formal oxidation numbers for the non-stoichiometric compounds like this, this is typically considered a non-trivial task of a questionable value. Also, see the answer of mine to the related question Oxidation state of tungsten in $\ce{W3O8}$.

Not the answer you're looking for? Browse other questions tagged inorganic-chemistry experimental-chemistry transition-metals solid-state-chemistry nanotechnology or ask your own question.

9
Oxidation state of tungsten in W3O8