How can subtilisin still function without its catalytic triad?

I read chapter 9 in the book Biochemistry (5th edition), by Berg, Tymoczko, and Stryer (provided in the NCBI site here). It describes the mechanism of action of the chymotrypsin enzyme. The catalysis is performed through the catalytic triad consisting of serine-195, histidine-57, and aspartate-102.

What intrigued me is the following section on the related enzyme subtilisin, which also has a catalytic triad but with different residue numbers:

9.1.5. The Catalytic Triad Has Been Dissected by Site-Directed Mutagenesis

[...] As expected, the conversion of active-site serine 221 into alanine dramatically reduced catalytic power. [...] The mutation of histidine 64 to alanine had very similar effects. [...]

These observations support the notion that the serine-histidine pair act together to generate a nucleophile of sufficient power to attack the carbonyl group of a peptide bond. The conversion of aspartate 32 into alanine had a smaller effect, although the value of $k_\mathrm{cat}$ still fell to less than 0.005% of its wild-type value.

My problem is in what it says next:

The simultaneously conversion of all three catalytic triad residues into alanine was no more deleterious than the conversion of serine or histidine alone. Despite the reduction in their catalytic power, the mutated enzymes still hydrolyze peptides a thousand times as rapidly as does buffer at pH 8.6.

A graph of the relative rates can be taken from this link: 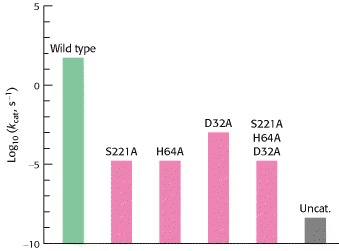 My question is: how can it be that after replacing all the triad residues, the enzyme still possess such a great catalytic activity? What is the mechanism behind that phenomenon?

If the substrate still binds to the protein, other parts of the mechanism are still in place. Specifically, the main chain amide groups that help to stabilize the tetrahedral intermediate are still present. In the absence of serine, water will attack the carbonyl. In the presence of serine and the absence of the histidine, serine will still be the nucleophile, but a less efficient one.

Look up oxyanion hole if this part of the mechanism is unfamiliar to you. 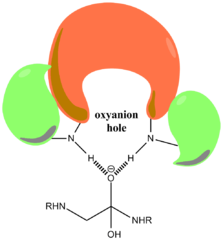 Not the answer you're looking for? Browse other questions tagged biochemistry catalysis enzymes structural-biology enzyme-kinetics or ask your own question.

8
How can water catalyse a reaction between iodine and aluminium?
5
How does a catalytic poison reduce a catalyst's activity?
1
How can I remove a PEG shampoo from a natural horn-comb without damaging it?
6
How can the trityl tetrafluoroborate function as a Lewis-acid catalyst
0
How can some enzymes work faster than the diffusion rates of the reactants allow?