Given a set of atoms and their positions in space, is there a way to compute the bond spring constant for each pair of atoms that are considered to be bonded (I can already determine the bonds with OpenBabel)? I don't want to rely on empirical data, and it's okay if the spring constant is wrong by up to about 20%. I already know the bond length and bond energy, if that helps.

For background: my ultimate goal is to compute the normal modes of a molecule, by finding the generalized eigenvalues of an undamped mass-spring system. I already know the mass matrix, but I don't know the stiffness matrix.

tldr, you want the force constant from the Hessian matrix .. ideally in internal coordinates

First off, you're saying 'first principles,' which most computational chemists would take to be some level of quantum chemical method, whether density functional or wavefunction-based. None of that is available in Open Babel - it only implements a very small number of classical force fields.

Even if you have optimal bond lengths and energies, that doesn't directly give you the force constants. For that, you want the second derivative. 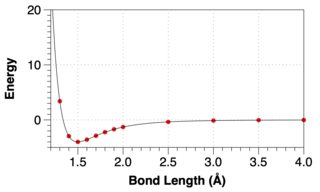 In principle, you could start perturbing atoms and evaluating the energy. In that way you could build up a stochastic approximation of the PES and evaluate numerical second derivatives. I don't recommend that.

A more accurate way would be at least to get the forces / gradients at each of those points, which you can use to build up the Hessian matrix. There are some notes about that as part of the psi4numpy notebooks which can be used to drive the Psi4 quantum program.

The problem is that for any molecule over a few atoms, the Cartesian Hessian matrix won't directly give you a bond force constant. Most vibrations include multiple atoms, and are rarely along any particular Cartesian axis.

The psi4numpy notebooks give some indication of how you can evaluate the Hessian in internal coordinates, which should be closer to what you want.

share|improve this answer
edited Feb 7 at 10:15

27
Suggest methods and basis sets for a variety of systems
8
How is the bond length calculated from the total electronic energy?
3
How to calculate molecular volume from the wavefunction?
2
Why the optimization in gaussian shows no bond with some atoms in diborane?
21
How to calculate wavenumbers of normal modes from the eigenvalues of the Cartesian force constant matrix?
6
Conversion of Hessian from internal coordinates to cartesian coordinates
10
Calclulation of MP2 first order wave function
1
extracting parameters from .SKF files ,