How does Gypsum Concrete work?

When mixed with water how does gypsum act as a binder in creating concrete?

The setting of cement involves the reaction of clinker minerals with water, to form a system of interlocking crystals, which lock the materials together.

The setting of cement is primarily due to the reaction of tricalcium aluminate(C3A), which is the most of the four clinker minerals present in concrete. The set regulating action of gypsum is due primarily to its reaction with C3A.

In the absence of gypsum, the reaction of C3A with water is very rapid. The C3A is converted to calcium aluminate hydrate ($\ce{4CaO.Al2O3.19H2O}$) which forms interlynking bridges of solid material between the cement particles. These interlinking bridges reduce the mobility of the cement particles and produce a firm structure, which results in setting of cement mixture. The rapid setting is called a flash set and its irreversible.

The presence of gypsum in cement slows the reaction of the C3A. When mixed with water gypsum dissolves and reacts with C3A to form ettringite ($\ce{3CaO.Al2O3.3CaSO4.32H2O}$). This ettringite is initially formed as very fine-grained crystals, which form a coating on the surface of the C3A particles. 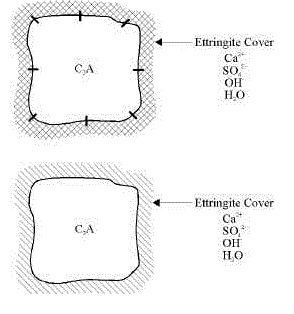 These crytals are too small to bridge the gaps between the particles of cement. The cement mix therefore remains plastic.

After the initial hydration reactions of cement, a dormant period occurs during which the rate of hydration of cement is greatly reduced. During this dormant period, ettrinite crystals continues to grow and eventually are large enough to impede the mobility of cement particles. At this stage setting occurs.

1
Why does gold react with cyanide and sodium hydroxide
4
How does the MG811 sensor work?
4
How does O-benzoyl-N-methylhydroxylamine hydrochloride oxidise this ketone?
2
Deuteration of enone - mechanism?
0
What happens to concrete if you add lye to the mix?
2
What actually happens in strong acid- weak base reactions?