Why are dendrites formed during dilute CuSO4 electrolysis black?

During the weekend, I wanted to conduct a kid's experiment - the copper dendrite formation. I was (partially) successful and now I would like to know what went wrong.

The procedure was taken from the weird science page (unfortunately in polish only).

The procedure was straight forward: Two, thin copper conductors on a microscope slide, connected to DC supply (voltage "over a dozen volts") and few drops of dilute $\ce{CuSO4}$ (according to the procedure, the solution should be transparent or maximum pale blue). It seemed pretty easy and the circuit was built in a few minutes. According to the description (and included pictures), I should see beautiful copper dendrites on the cathode, where $\ce{Cu^2+}$ reduces to $\ce{Cu}$, thanks to electric current (the reaction $\ce{Cu^2+ + 2e- -> Cu}$)… 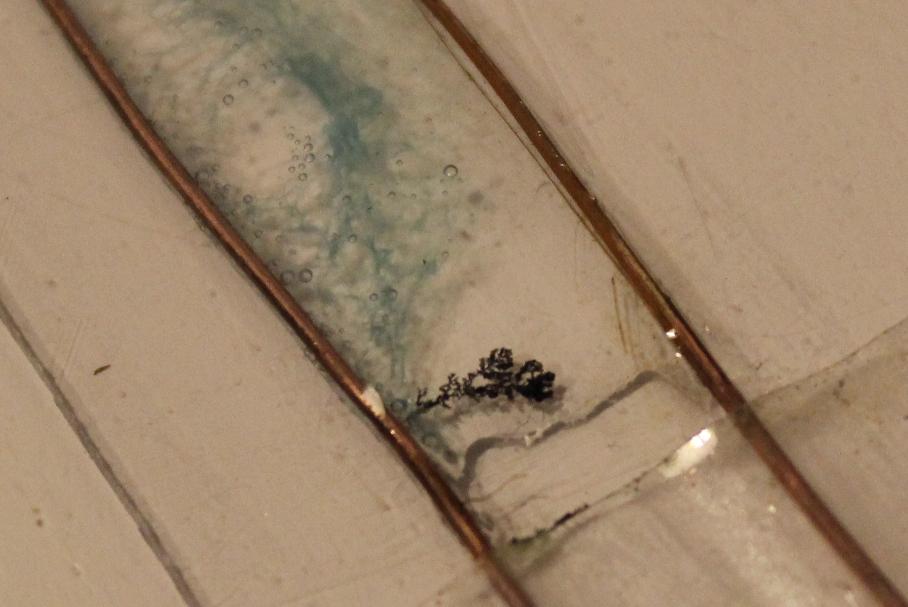 In fact, the reality was slightly different (see attached figure). Below is my interpretation, but I am aware that it could be wrong:

Why the dendrites are black? It does not look like copper but rather like $\ce{CuO}$. I’ve found the reference stating that $\ce{Cu(OH)2}$ transforms into $\ce{CuO}$ in basic solutions at room temperature, which could be an explanation (Cudennec and Lecerf, The Transformation of $\ce{Cu(OH)2}$ into $\ce{CuO}$, Revisited.). But why are these growing on the cathode instead of pure $\ce{Cu}$? And is it $\ce{CuO}$ or am I wrong?

To quote a source as you also noted:

Copper hydroxide Cu(OH)2 is metastable. It easily transforms into copper oxide CuO more stable, either in the solid state by a thermal dehydration or at room temperature, in aqueous basic solutions. In the solid state, the transformation is performed at a relatively low temperature, 423 K.

In the current case, a basic solution develops and copper hydroxide breaks down into CuO and water.

However, there may also be heat from applying the overpotential, and this could speculatively be the source of CuO observed.

More precisely related to the cathode, start by noting per this source (Lumen Learning), for example, to quote:

Assuming on the cathode the formation of an intermediate species (like $\ce{H*}$ mentioned on StackExchange in an advanced discussion of the underlying mechanic on the electrolysis of water) upon self-reaction, to quote:

In an alkaline electrolyte they propose the following mechanism, which only slightly deviates from the above. The intermediate species are the same, that's why they did not need to treat them separately. On the cathode they just summarised as $$\ce{2H2O + 2e- -> 2{}^{-}OH + H2}$$ as the mechanism is bound to be the same.

Next, the action at the cathode of created OH- on Cu++ forms Cu(OH)2 which, in the basic conditions, results in CuO.

Not the answer you're looking for? Browse other questions tagged electrochemistry home-experiment or ask your own question.