Importance of zinc blende and wurzite crystal structures for semiconductors?

I am currently studying the textbook Physics of Photonics Devices, Second Edition, by Shun Lien Chuang. In a section discussing the basic concepts of semiconductor band and bonding diagrams, the author gives the following description:

The basic idea is that for a semiconductor, such as $\ce{GaAs}$ or $\ce{InP}$, many interesting optical properties occur near the band edges. For example, Table 1.1 shows part of the periodic table with many of the elements that are important for semiconductors, including group IV, III-V, and II-VI compounds. For a III-V compound semiconductor such as $\ce{GaAs}$, the gallium ($\ce{Ga}$) and arsenic ($\ce{As}$) atoms form a zinc-blende structure, which consists of two interpenetrating face-centered-cubic lattices, one made of gallium atoms and the other made of arsenic atoms (Fig. 1.1).

This seems to be the relevant Wikipedia article for zinc-blende (Zincblende) structure.

I was interested in understanding the relevance of this structure to semiconductors, so I did further research. I then came across this website, which says the following:

Here are the two most important crystal structures for semiconductors.

They are often referred to by the historical names "Zinc blende" from the German "Zinkblende" $= \ce{\alpha-ZnS}$, a rather ubiquitous mineral. The name "Sphalerite" also comes form the German: "Sphalerit", which, as was the custom of the time, stems from the Greek "sphaleros" meaning treacherous or malicious because it is easy to confuse it with other minerals.

Wurtzite was and is the name of the $\ce{\beta-ZnS}$ modification - the hexagonal high-temperature variant. The named after the French chemist C. A. Wurtz (* 1817, † 1884), which gives us an idea of how old those names are. 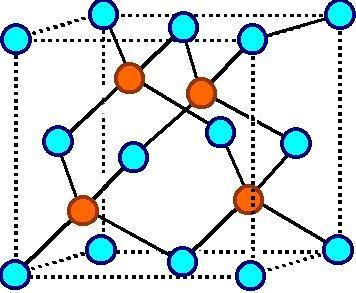 Red lines are not showing bonds. 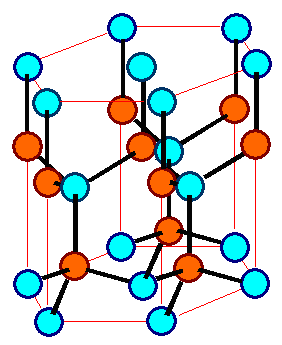 However, this website does not actually explain why these are the two most important crystal structures for semiconductors. I was wondering if someone would please take the time to explain this.

As suggested I can try to summarize the basic idea in an answer although I wouldn't say it solves the bounty. I'm also unsure why you even set the bounty for it.

For this I'll quote the book that I found a few days ago. As I own the missing pages now as well the answer seems a bit more elaborate then before. As the book is in German I will translate the text.

I'll skip the next pages that deal with the formation of the band-structure and the symmetry aspects as I have no experience in these topics and continue with the $III-V$-semi-conductors.

At this point I will switch to basic solid state chemistry as the book doesn't elaborate this part well enough. As solid state chemist I often have examples like these with my students. A while ago we were discussing the silver-mobility in high-temperature $AgI$, which shows quite some conductitiy through defects and the low temperature modification. At this point I would typically ask for reasons why $AgI$ might be problematic. Typical answer that I expect are:

For the second part they either check these facts before we talk about it or they can use the things they have learned in lectures. One of them being the Grimm-Sommerfeld rule. Basically, compounds, that form between two elements to the left and to the right of another element will likely adopt the structure of said element. So for a group $IV$ element like the silicon structure, it can be $III-V$ or $II-VI$ or $I-VII$. It's one of these rules that are taught in the very first semester but people forget about it although it's super useful for compounds you don't know.

Therefore my idea would be here that if, as the book mentions, $sp^3$ hybridisations and covalent, tetrahedral structures as the main source for the semi-conducting properties it's only natural that $III-V$ compounds show a similar effect. Those bands are basically molecular orbitals. If you start from a di-atomic molecule and increase the amount of bonding partners you will get more and more orbitals that move closer and closer together until you have bands. If let's say Ge has a certain band-gap and you change to GaAs, or course the single contributions to the HOMO and LUMO and later to the bands will be different but not that far away from Ge, so we expect a comparable band-gap.

Zincblende and wurtzite structures are not the only ones that afford semiconducting materials. This short list of narrow-gap semiconductors involves compounds with a variety of crystal structures. Aside from the fact that several examples clearly have different structures because they do not have 1:1 stoichiometry, the examples lead sulfide (PbS) and lead selenide (PbSe) have halite structures.

Not the answer you're looking for? Browse other questions tagged crystal-structure crystallography semiconductors or ask your own question.

7
Why does ice freeze the way it does?
7
What is the difference between crystal structures of proteins, organic and inorganic materials?
3
Why does Ga improve conductivity of Ge?
2
Bravais Crystal Lattices and Voids
3
Why are silicon and germanium used as semiconductors but not other metalloids?
3
Crystal structure database search for space groups
2
What are the oxidation states of galium and arsenic in GaAs semiconductor?
6
Why does Samarium have such a large c-axis lattice constant? (>26 Å) Are there significantly larger lattice constants of the elements?