How to name the following compound?

I know that when both carboxylic acid and ester group are present then the carboxylic acid takes priority and ester is treated as side chain . It is denoted by prefix alkoxy carbonyl. But the arrangement is different in the given figure. The ester group is attached with single bonded oxygen connected to main chain .Please explain how to name such compounds. Answer to given problem is option d.

The IUPAC name of the following compound is: 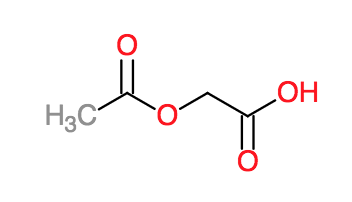 You have already found out that the carboxylic acid group is the principal characteristic group. Therefore, the ester group has to be expressed as a prefix. The corresponding rule in Nomenclature of Organic Chemistry – IUPAC Recommendations and Preferred Names 2013 (Blue Book)) reads as follows.

When, in an ester with the general structure $\ce{R-CO-O-R'}$ or $\ce{R-S(O)_x-O-R'}$, another group is present that has priority for citation as the principal group or when all ester groups cannot be described by the methods prescribed for naming esters, an ester group is indicated by prefixes as ‘acyloxy’ for the group $\ce{R-CO-O-{}}$, and ‘alkyloxy(alkanyl)…oxo’ or ‘alkyl(alkanyl)oxycarbonyl’ for the group $\ce{-CO-OR'}$.

In this case, the ester group has the form $\ce{R-CO-O-{}}$, which is expressed as a prefix of the form ‘acyloxy’.

Note that some acyl groups that are derived from carboxylic acids have retained names used as preferred IUPAC names. In this case, the preferred prefix for the acyl group $\ce{CH3-CO-{}}$ is the retained name acetyl rather than the systematic name ethanoyl. The preferred name for the corresponding acyloxy group $\ce{CH3-CO-O-{}}$ is acetyloxy. Also note that the name acetyloxy is preferred to the contracted name acetoxy that may be used in general nomenclature.

1
Naming ester as a substituent to carboxylic acid