What is the explanation of the energy gap law in radiationless transitions?

The rate of radiationless transitions such as internal conversion and intersystem crossing decrease with the size of the energy gap between the states, according to

The papers by Jortner[1] that I have found which derive this expression involve taking steepest descent integrals of the flux autocorrelation function, but this is not a very intuitive explanation. (And in particular is not suitable for undergraduate chemists.)

How can this expression be understood qualitatively from the perspective of the sum over Franck-Condon factors:

These are a few 'rough and ready notes' and some data on radiationless transitions.

The rate constant decreases exponentially with energy gap between S and T in solution. In contrast in isolated molecules the gas phase rate increases with energy gap, see figures below.

Molecules isolated in the vapour phase

The pure singlet and triplet states cannot interconvert because of the strict spin selection rule. An interaction, which is spin-orbit coupling, mixes the states together to make new states that contain a bit of each initial state. The singlet now contains a little triplet and triplet contains a little singlet. As the S1 and S0 states are orthogonal to one another without an interaction; $\int S_1 S_0 d\tau = 0$ so no transition. States must have different symmetries if coupled by a photon similarly a vibration with the correct symmetry can also couple S1 and S0 to cause internal conversion.

Transitions occur because an interaction mixes basis states together (singlet and triplet, say) to form new states containing part of each. These new eigenstates are shown schematically below, the thick lines on the lower pair show the amount of each base state in the mixed state. 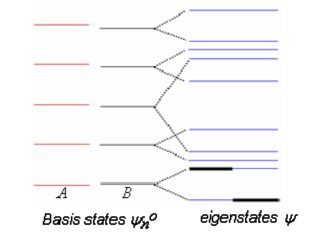 One state can couple to many others, and when there are very many final states (below) we think of them as a quasi-continuum of levels. The radiationless transition rate is the rate from one state (optically excited) to these many final states. 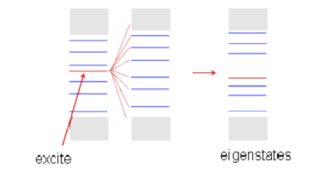 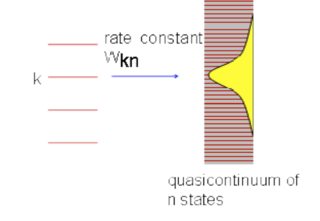 Robinson & Frosch simplified the calculation of Fermi Golden Rule with approximations; (a)Assume that the interaction energy is the same to all $n$ levels , (b)The (vibrational) Franck-Condon factors take an average value. (c) The density of states $\rho$ is made to fit data! ( $\rho$ = number of states / wavenumber)

The approximate formula is: $\displaystyle W_E =\frac{2\pi}{\hbar}|V|^2F_c\rho(E)$ where $W$ is rate constant at energy $E$, $V$ is interaction matrix element between $k$ and $n$ , $F_c$ is the average Franck Condon factor and $|V|^2F_C=\int\psi_1\Omega\psi_2d\tau$. The $\Omega$ is spin-orbit operator for intersystem (singlet to triplet) crossing, kinetic energy operator for internal conversion. The term $\rho(E)$ is the effective density of states at energy $E$.

This formula is not good for accurate calculation but indicates what is important.

The full and detailed calculation shows that :

(a) In the initial state, say singlet, only certain vibrational modes are effective in causing a radiationless transition.

(b) These modes are separated out and called promoting modes, at least one is present, and can only be identified by experiment.

(c) These promoting modes are the only modes which do not have zero electronic coupling terms.

(e) In the final state accepting modes receive the vibrational energy, these are modes of largest frequency so that as few quanta as possible of each are excited. Usually these are CH or CC vibrations.

The energy gap law $\displaystyle K_{ST}=Ae^{-\beta\Delta E}$ is observed experimentally and is obtained theoretically from $W_{kn}$ by taking a Boltzmann distribution over initial levels and then the maximum value of resulting expression. It turns out that this term is greater than all the others combined. (btw, this energy gap law has nothing to do with Arrhenius equation.)

The full expression is

where $\displaystyle X_n=\frac{\mu_n\omega_n}{2\hbar}(Q_n-Q_k)^2$ is the displacement between vibration $n$ between energy surfaces $Q_n\to Q_k$. The term in the square bracket is the 'Franck Condon Factor density of states' assuming harmonic oscillators. $\omega_k$ is the promoting mode and has no displacement between the two states. The $\delta$ term ensures energy conservation, i.e. $\delta(0)=1$, else is zero.

This equation is very difficult to use, but to a good approximation the complicated $\Sigma\Pi$ term can be replaced by its maximum value and a significant simplification is obtained.

We now take $X$ as being the displacement of the vibration of maximum frequency, $\omega$, usually CH or CC vibration. $\Delta E$ is singlet -triplet energy gap. The expression for the energy gap law is

and $\gamma$ has values in the range 3 to 5 typically and is effectively a constant.

Its success is that it describes fall off with energy gap and also D/H difference in rate constants due to difference in frequency, see first figure above. The difference to the gas phase is the averaging over the Boltzmann distribution.

In the gas phase with a large molecule, say benzene, we are in the statistical limit with a huge number of final states, effectively a continuum, then the calculation is from one initially excited level $k$ to many levels $n$ in the final state.

10
Non-radiative transitions or what features of rhodamine result in it being so highly fluorescent?
5
How to calculate the quantum density of states?

6
Why does the Förster resonance energy transfer scale as 1/r⁶?
18
Why does the energy gap for π - π* transitions shrink with the size of the pi-conjugated system?
8
What is the origin of the colour of azo dyes?
8
How strict is the “to excite electrons the energy must equal the energy state difference” fact?
4
Is the colour of leaves due to d-d transitions in chlorophyll?
10
Non-radiative transitions or what features of rhodamine result in it being so highly fluorescent?
1
What is the mechanism of photosynthesis?
5
Reconcile the Beer Lambert Law with rate of absorption