Great efforts have been made to generate accurate and reliable ion thermochemistry data. Once such data is available, it can be employed to elucidate fragmentation mechanisms and in addition, it is useful for obtaining some background on the energetic dimensions in mass spectrometry.

Heats of formation of neutral molecules, $\Delta H_{f(RH)}$, can be obtained from combustion data with high accuracy. Bond dissociation energies can either be derived for homolytic bond dissociation

The homolytic bond dissociation enthalpies give the energy needed to cleave a bond of the neutral molecule which, in the gas phase is in its vibrational and electronic ground states, to obtain a pair of radicals which also are not in excited modes. Homolytic bond dissociation enthalpies are in the range of $3-5 \ eV$ (table 2.2). The heterolytic bond dissociation energies apply for the case of creating a cation and an anion in their ground states from the neutral precursor which means that these values include the amount of energy needed for charge separation; they are in the order of $10-13 \ eV$ (Table 2.3). Due to the significantly altered bonding situation, breaking of a bond is clearly less demanding in molecular ions than in neutral molecules.

I think this is good explanation. However, since this is my first exposure to these concepts, I'm interested in a higher-level explanation. Specifically,

I would greatly appreciate it if some of the more knowledgeable contributors would please take the time to clarify these concepts.

The heat of formation of a neutral molecule is important in mass spectrometry because in order to measure the characteristics of individual molecules, a mass spectrometer has to convert them to relevant ions. Once ions form, they can be moved about and manipulated by external electric and magnetic fields as depicted in following sketch of mass spectrometer (MS): 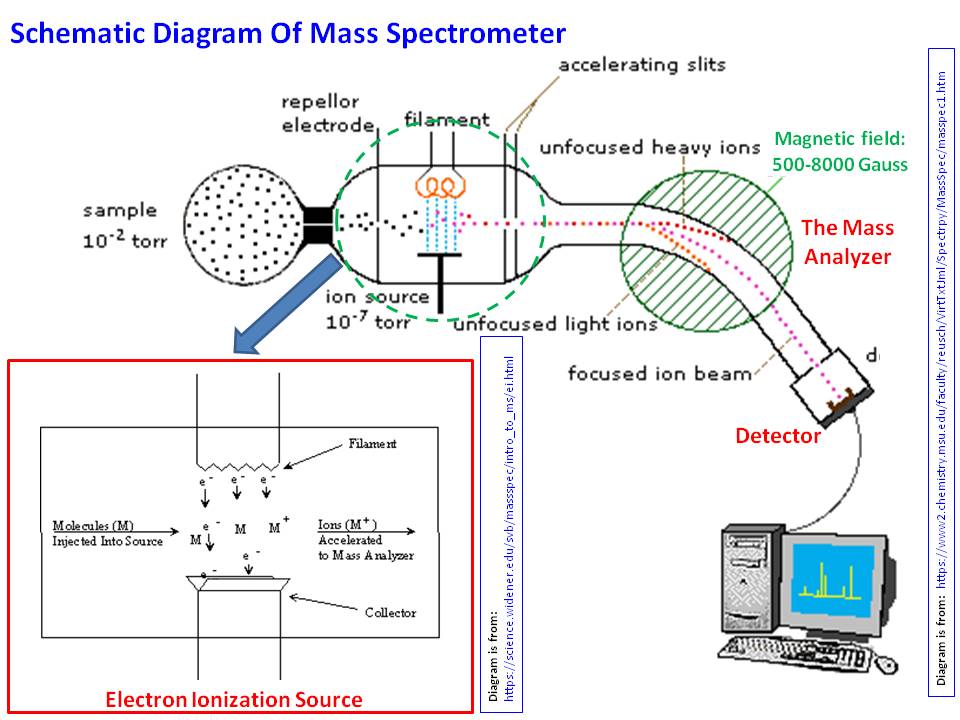 The Ion Source, the Mass Analyzer, and the Detector are the three main components of the mass spectrometer. The Ion Source, which can be considered as the heart of the spectrometer, is the one needed to ionize individual molecules. Electron Ionization (EI) is the most common ionization technique used for mass spectrometry (Note: Older literature usually refer to EI as Electron Impact, but Electron Ionization is the currently accepted term; EI works well for many gas phase molecules, but it does have some limitations as well, such as causing extensive fragmentation so that the molecular ion is not observed for many compounds). In this ionization technique, molecules of the sample are bombarded by electrons generated from a heated filament (see the insert red box in the diagram). The electrons are produced by passing a current through the filament. The amount of current controls the number of electrons emitted by the filament. An electric field accelerates these electrons across the source region to produce a beam of high energy electrons. When an analyte molecule (usually organic molecule) passes through this electron beam, a valence shell electron can be removed from the molecule to produce an ion, mostly a positive ion (Note: Ionization does not occur by electron capture, which is highly dependent upon molecular structure).

Since the ionization is produced by a single electron that is accelerated to $\pu{70 V}$, the technique is commonly referred to as $\pu{70 eV}$ EI. This high energy electron collides with a molecule (analyte), it transfer more than enough energy to over come ionization energy of the particular site (usually a electron from a lone pair of oxygen of carbonyl group or alcohol group) of the molecule, often ionizing the analyte by knocking away one of the molecular electrons (either bonding or non-bonding). The resultant ion is a radical cation. This web page describes the possibility of the fragmentation happens in mass spectrometer:

The amount of energy transferred during this process depends upon how fast the electron (from ion source) is traveling and how close it passes to the molecule (analyte). In most $\pu{70 eV}$ EI experiments, approximately $\pu{1400 kJ/mol}$ ($\pu{15 eV}$) of energy is transferred during the ionization process. There is, however, a distribution of energy and as much as $\pu{2800 kJ/mol}$ ($\pu{30 eV}$) is transferred to some molecules. Since approximately $\pu{960 kJ/mol}$ ($\pu{10 eV}$) is required to ionize most organic compounds and a typical chemical bond energy is $\pu{290 kJ/mol}$ ($\pu{3 eV}$), extensive fragmentation is often observed in $\pu{70 eV}$ EI mass spectra. The distribution of energy transferred during ionization and the large number of fragmentation pathways results in a variety of products for a given molecule. Other electron voltages may be used to vary the amount of fragmentation produced during ionization. For most organic compounds the threshold energy for EI is about $\pu{10 eV}$. After ionization of the molecule, the residual energy from the collision may cause the molecular ion to fragment into neutral pieces and smaller fragment ions. This fragmentation can be through either homolytic cleavage or heterolytic cleavage. The molecular ion is a radical cation, but the fragment ions may either be radical cations or carbocations, depending on the nature of the neutral fragment. For example, Fragmentation of Toluene is depicted in following diagram: 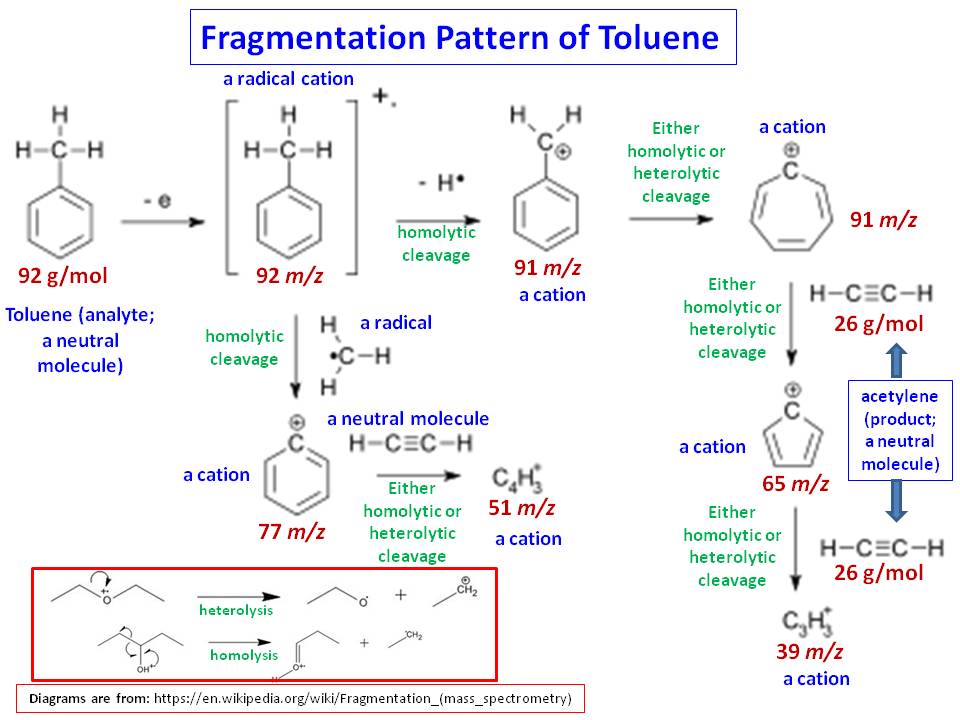 A recent publication described why most fragmentations in mass spectroscopy preferred homolysis over hererolysis (Ref.1):

Bond strength is an essential parameter for discussion of bonding and reactivity. While bond fission can occur by homolysis or heterolysis, for neutral compounds such as alkanes the term “bond strength” generally denotes rupture by the lowest energy homolytic pathway. For example, the $\ce{C–C}$ bond strength in ethane is listed as $\pu{359 kJ mol–1}$,$^{[Ref.2]}$ representing homolysis, which requires one-third of the energy for heterolysis ($\pu{1297 kJ mol–1}$).$^{[Ref.3]}$

In addition, Ref.4 is a great review on mass spectrometry‐based analysis of protein structure.

Not the answer you're looking for? Browse other questions tagged thermodynamics bond enthalpy mass-spectrometry ionization-energy or ask your own question.

14
Why can't a reaction go to completion?
4
If a bond dissociation energy is listed, does it refer to homolytic or heterolytic fission?
3
Electron Ionization and the Franck-Condon Diagram: vibrationally excited and vibrationally ground states
1
Values for heat of reaction example
2
Why does the heat of formation of organic radicals and positive ions decrease with their size and degree of branching at the radical or ionic site?
0
Hyperconjugation, stability of molecules, and heat of formation
3
Heterolytic vs homolytic cleavage of the C−H bond in cyclopentadiene