What substances do humans consume that are caloric but neither protein, carb, nor fat?

On the Medical Sciences StackExchange site I asked Can a calorie be neither protein, carb, nor fat? and got a very helpful answer, which was that ethanol (in alcoholic drinks) is caloric but neither a protein, nor a carb, nor a fat. I then asked a follow-up question as a comment: Where can I find a list of all such substances? That is, substances that are caloric but neither protein, nor carb, nor fat. The person who answered my question recommended I post the question to this SE site.

If you go to https://eur-lex.europa.eu/legal-content/EN/TXT/PDF/?uri=CELEX:01990L0496-20081211&qid=1580028914722&from=EN you will see a fairly extensive list of caloric compounds (screenshot pasted below). This list is probably not comprehensive -- likely there are many compounds we (which includes our gut bacteria) can metabolize for calories. Rather, it's limited to componds that are caloric and approved for use in food. [It also doesn't include compounds that are naturally found in foods, and may be caloric, but are only present in very small quantities, e.g., nucleic acids.]

You can see that, in addition to fat, proteins, carbohydrates, and ethanol, the table lists polyols, organic acids, salatrims, and fiber.

Some explanation of the table may be helpful:

Polyols are artifical sweeteners. They include lactitol, maltitol, mannitol, sorbitol, xylitol, erythritol, glycerol, hydrogenated starch hydrolysates, and isomalt. [Though note that while erythritol is a polyol, it is listed separately as non-caloric. And while glycerol, aka glycerin or glycerine, is a sweetener, it is also used in food for other purposes.]

Organic acids include acetic acid (the main component of vinegar, other than water), as well as citric acid, ascorbic acid, and malic acid (the latter three are found in citrus fruits).

Fiber refers to dietary fiber, which is the type of fiber we can digest completely.

Salatrims are "short and long chain acyl triglyceride molecules"; they are a type of low-calorie fat substitute. 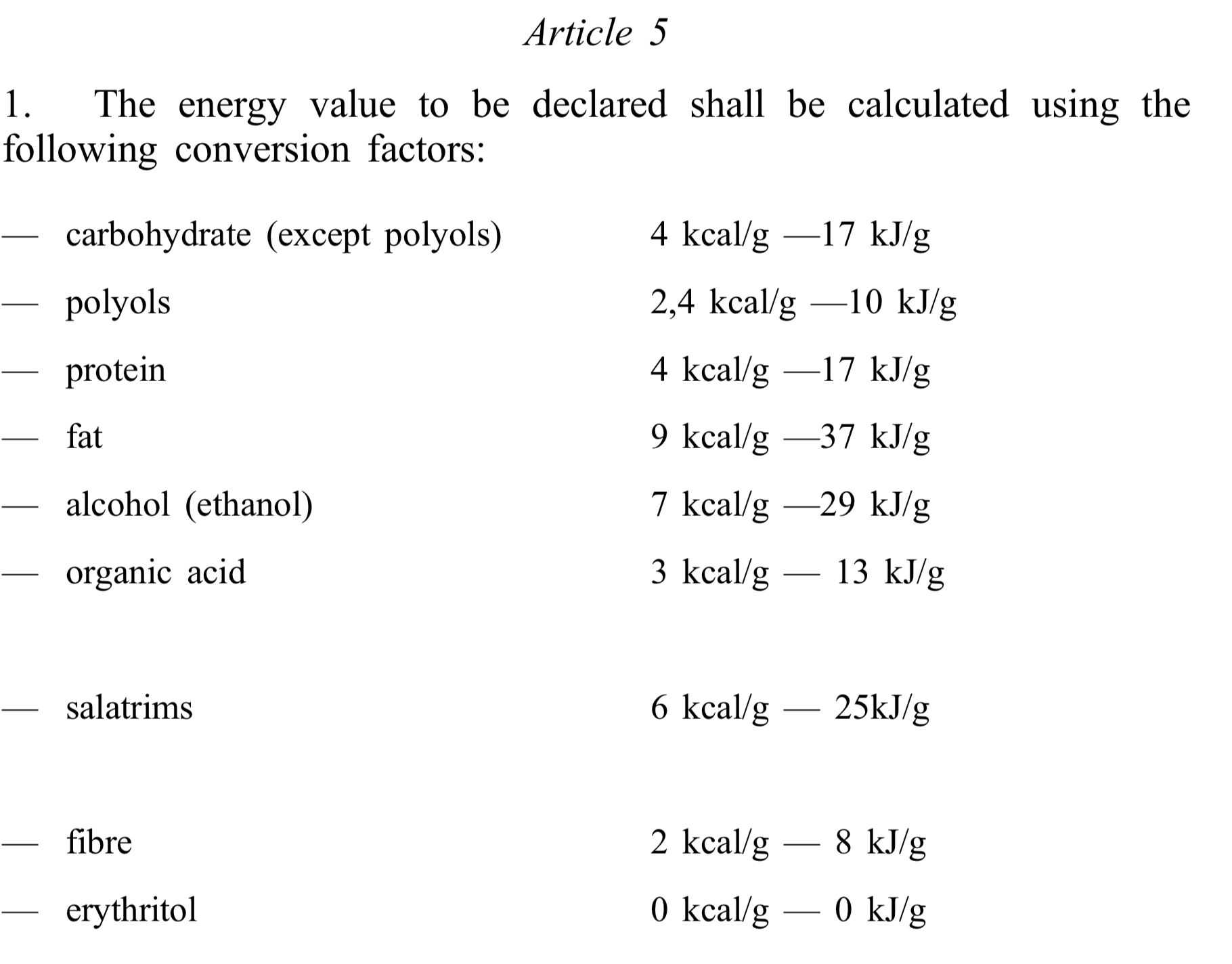 The chemical answer is that everything that is not in its thermodynamically most stable state (for many elements that means maximally oxidised or reduced; depending on the element in question) can be transformed into something else under the release of energy. This excludes:

There are probably one or two more but as you can see this is a very short list compared to all the things that one might possibly eat or drink.

A good rule of thumb is that if it is in food, it probably derives from nature. A second one is that if it was generated by a living thing and it is not in its thermodynamically most stable state, it can probably be broken down by another living thing. The only question that remains is whether humans can break it down and use it as an energy source. One very simplified way of looking at it is: if you eat it, it passes through your digestive tract and you do not recognise it when it comes out, then either you or your gut microbiome were able to metabolise it; it should probably count as caloric.