Why did life end up with the big 4 elements, and specifically nitrogen? [closed]

This question is mostly about the human body, but it's also about life in general.

It's not difficult to notice a big different between the abundance of elements on Earth & that in the body. I've been pondering why. Such a huge question, but here I choose to focus on the big 4. Below is my current understanding, please correct me if I'm wrong or add things that I miss.

An umbrella reason for why $\ce{O}$ & $\ce{H}$ are prevalent is because $\ce{H2O}$ is such a wonderful solvent. Life generally depends on reactions to function, and they happen best when immersed in a liquid. Water is good and copious, hence life use it.

Both $\ce{H2O}$ and $\ce{C}$ have something "best" in their belt. I guess $\ce{N}$ must have some stuff of highest quality, too, but I have no clue what it is. So, even though my knowledge of the other 3 elements is crude, I'm bugged by nitrogen the most.

Because chemistry built on carbon, hydrogen and oxygen would be very dull and building complex structures from modular components would be impossible

The key point to remember is that life depends on complex chemistry. Living things are, by definition, things that can replicate and things than can build structures that can do complex chemistry. Metabolism is the process of taking simple things from the environment and making them into complex things. This requires complex machinery, built from simpler chemicals available in the environment.

While it might, in principle, be possible to build very complex carbon-oxygen compounds that could metabillise and reproduce themselves, there is no easy way to do so from simple components. But throw nitrogen into the mix and simpler routes to complexity are available.

Take the molecules that make up most of the complex machinery of all living things: proteins. Proteins make up most of the complex machines that do the job of metabolism and they also constitute many of the structural components that make up living things. But they are built from a small number (about 20) simpler chemicals: amino acids. Amino acids are fairly simple chemicals that might be thought of as the equivalent of Lego bricks for building an incredible variety of living structures. Most consist of only carbon, hydrogen, oxygen and nitrogen. All have the core structure $\ce{NH2CH(R)CO2H}$ (where R can be a variety of organic chunks) which constitutes the equivalent of the standardised bricks in Lego allowing all pieces to fit together so more complex structures can be built. In the case of proteins, that core functionality allows a variety of different amino acids to be "strung" together end-to-end (the amino end reacts with the carboxylic acid end on each acid).

The variety of different structures than can be created by changing the sequence of amino acids is staggeringly, unimaginably large. Many proteins contain hundreds of amino acids and you only need about 60-70 for the possible number of different sequences to exceed the number of atoms in the universe. This means that, by exploiting combinations of simple chemicals (which are not that hard to create with simple chemistry), life can suddenly explore an unimaginably wide range of possible complex structures. Perhaps such structures could be built from fewer elements, but not in a modular way that uses a small range of available components and a single way of joining them together.

The availability of this level of complexity from things that (mostly) consist of C,H, N and O is why the use of nitrogen is key to life. The constraint isn't the availability of the elements (though simple nitrogen-containing compounds are fairly available), it is the accessibility of complex structures from simple components.

My take is a little bit different. Organisms evolved to adapt to the chemistry that is there. And what's there, primarily, are hydrogen, carbon, nitrogen and oxygen. Plus, as we shall see, sulfur, which cannot be ignored in proteins.

Here we find a list of the most common elements in the Universe. Although everything else us made from fusion of hydrogen, the abundance order is not based on atomic number a lobe. Nature tends to favor certain elements that form especially stable nuclei as the fusion processes succeed:

These are also most common in the Solar System, accounting for 99.9% of the total (the ppm numbers quoted add up to 999,060). Of these ten, helium and neon are chemically almost inert; and magnesium, silicon and iron do not form fluid or volatile compounds under typical conditions in space and thus do not lend themselves to reactions that form complex "organic" molecules (where they do appear, it's only as very minor constituents in the presence of plenty of the other, more volatile-compound forming elements). This leaves hydrogen, carbon, nitrogen, oxygen and sulfur, the last of which also has some importance in proteins. Thus, plausibly, life found what was there and adapted the chemistry of those elements for its purposes.

Dusting off my geochemist hat here - In addition to elemental abundance, the matter of temperature & pressure is also key. The "solid" planet that we call home is undergoing solution chemistry on a vast scale, with most minerals differentiated mainly by local T/P conditions, rather than chemical composition ($\ce{SiO_4}$-based minerals being most common by far in the crust and mantle).

The narrow range of temperature & pressure conditions on Earth's surface at the cosmically "current" moment just happens to intersect with the T/P zone in which a few crust-abundant elements are able to form stable, reproducible, but also potentially-variable compounds. In our case, that means the protein-in-water "soup" that forms the basis for all life on Earth.

But it's not unreasonable to posit that a different "sweet spot" of solution chemistry and geochemical/astrophysical conditions could have occurred (or might occur elsewhere/elsewhen).

While that hypothesis is realistic in terms of the awesome properties of RNA, it requires a lot of complexity and five different elements: C, H, N, O, P. There is a hypothesis of warm little ponds (WLPs) being fed nucleobases from meteorites and polymerizing as the years go by: https://www.pnas.org/content/114/43/11327.

The classic hypothesis of atmospheric chemistry creating proteins (Miller-Urey) has fallen out of favor because apparently the atmosphere did not contain much ammonia in most models (see e.g. Trainer (2013)).

Of course, I am going backwards in discussing these hypotheses, assuming that we need RNA. The OP was going the other way - what chemistry is possible with what was most abundant or most likely to make interesting life-supporting polymers.

Both H2O and C have something "best" in their belt. I guess N must have some stuff of highest quality, too, but I have no clue what it is.

In terms of nucleic acid chemistry, nitrogen plays the role of hydrogen bond acceptor and donor. The donor role is a unique one - there is no good way to position a hydrogen on oxygen in a certain direction, the hydroxyl group almost always rotates. In the other hand, imine functional groups (or amides or heterocycles with nitrogen) have the hydrogen pointing in a fixed direction.

Examples are Watson-Crick base pairs in nucleic acids and main chain hydrogen bonds in proteins. In both cases, all hydrogen bond donors are N-H rather than O-H. 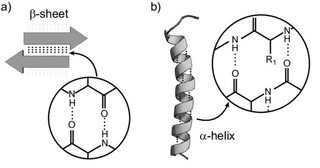 Why though? Well, nitrogen-carbon bonds are fairly strong and unlikely to decompose under temperature or through reaction with other compounds. Also, nitrogen can bind to one, two or three other atoms, so nitrogen allows the compounds for more complex structure. Nitrogen atoms also can form organic aromatic compounds which are very stable.

So what about other elements? Metals (and semimetals for all pratical purposes) and noble gases go straight out of the window as they can't form stable bonds with carbon. We're mostly left with nonmetals.

The fluorides can for fairly stable bonds with carbon, but are much more likely to exist in form of anions and it's hard to oxidize those anions so they can bond with carbon. Also, they can only bond with one carbon so they can't allow for more complex compound.

The sulfur can actually form fairly stable bonds with carbon and we indeed see that sulfur is fairly common in live organisms. Selenium is similiar in that regard. Carbon-phosporus bond is not very stable and phosphorus is mostly found in organisms in form of inorganic anions. Most other nonmetals are either too rare or simply don't form stable bonds with carbon.

Not the answer you're looking for? Browse other questions tagged organic-chemistry physical-chemistry or ask your own question.

0
What is the range of sizes for molecular systems?
1
What are some general tests that would determine an unknown compound?
5
Compound with a bright green emission when electrically excited
70
How do organic chemistry mechanisms become accepted?
2
Why is the polar-nonpolar electronegativity difference defined to be 0.4?
2
How do we know the natural abundance of isotopes on Earth?