What do you mean by “periodic” in the periodic table? [closed]

“The physical and chemical properties of the elements are periodic functions of their atomic numbers”.

But I don't think this is so! (Forgive me for my stupidity. But please try to understand what I am saying and if you find any mistakes then please let me know).

The properties of Element is periodic so why then this "periodicity" doesn't hold in case of Li?

First you need to understand what a periodic function is in mathematics. For example, if you are standing at any point P on a circle, you start walking on the circumference and count the degrees you completed. Once you complete 360 degrees, and you will find yourself on exactly the same point P. Sines, cosines and many other functions are periodic. This term existed before the chemists started using the term periodic law in the early 1800s or perhaps well before that. If $f(x)$ is a function with period $T$, then $f(x+T)= f(x)$ for a periodic function in a defined range of $[a,b]$. The period $T$ may change to $T'$, when x is in a different range say, $[c,d]$. This is an example of a discontinuous periodic function. As you will see, periodic properties of the elements form a discontinuous periodic pattern in a loose sense.

Now come to the periodic law: "The law that the chemical elements, when listed in order of their atomic numbers (originally, atomic weights), fall into recurring groups, so that elements with similar properties occur at regular intervals." [unabridged OED].

Instead of $x$ for a mathematical function, the independent variable is the atomic numbers Z (Zahl for a number in German) for the chemists. So this periodic law has a very loose connection with mathematical periodic function, because none of the values are actually repeated. Each element is unique, but in a loose way, their properties or even a better word is trends "repeat" themselves after a certain number of elements. See this chart for example. Atomic radii vs. Z, do you see a loose periodic pattern? 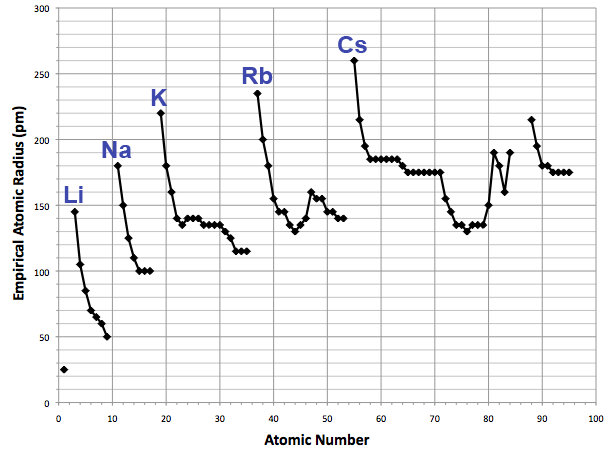 Once you have got the idea of periodic function in a loose way for the chemical elements, get ready to the see the physicists style of periodic table. It explains why some properties loosely repeat themselves.

0
Why is periodicity seen in these certain properties?
3
Can you calculate the properties of a substance based solely on its atomic properties?
5
Memorizing polyatomic ions? Using Periodic Table
5
Why is the periodic table periodic?
14
Do non-English speaking countries use the same element symbols?
4
Why don't elements having the same valency as Carbon bond so readily?