The complex $\ce{Ni(acac)2}$ is paramagnetic as expected , i.e it has two unpaired electrons giving rise to a magnetic moment of $ \sqrt{8}$ BM but doesn't have the tetrahedral geometry consistent with the CFT assumptions , why ?

well if the above thing is true then what is the actual structure of the complex ? please help !

It is a good question, it is a gemstone hiding in the mud.

I have searched the Cambridge database, all the bis-acetylacetonatonickel complexes which have four coordinate nickel centres are square planar. There are three common coordination geometries for nickel(II) which we need to consider.

Tetrahedral, square plannar and octahedral. Here is a diagram (not to scale) of the d oribital energies in the three types of complex. 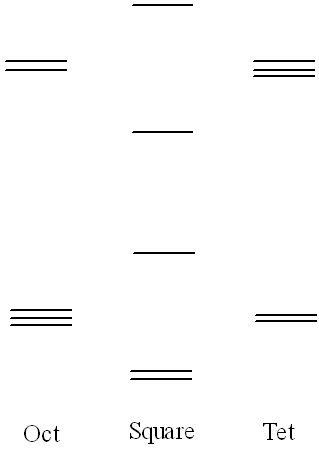 Nickel(II) has eight d electrons, if we pack them into the octahedral or tetrahedral complex we will end up with two unpaired electrons. But if we stick the electrons into a square planar complex then if the difference in the energy between the two uppermost d orbitals in energy is sufficient then we will get a low spin $\mathrm d^8$ complex. To get spin-pairing, the energy difference between the orbitals must be greater than the energy required to spin pair two electrons.

There is a whole continuum of complexes between perfect octahedral and perfect square planar. If the distance between the metal and the two ligands on one axis is increased (tetragonal distortion of an octahedral complex) then the complex is part way between the two extremes. There is a good undergraduate lab experiment based on the early work of David Goodgame which is all about the nickel(II) complexes of N,N-diethylethylenediamine. I did this experiment as an undergraduate, I supervised students doing it as a PhD student and as an academic I have used it in a lab class. Trust me, it is good!

What the person asking the original question should have been thinking about is the question of square planar vs octahedral (or tetragonally distorted octahedral).

If I was to take an acac-type ligand with bulky groups in place of the methyls such as tert-butyls then I am sure that I would have an isolated nickel. This nickel could well be tetrahedral. But in fact it is square planar (F.A.Cotton, J.J.Wise, Inorganic Chemistry, 1966, 5, 1200, CCDC code DPIMNI)

If we look at a nickel(II) complex of an acac where the methyl groups have been replaced with phenyl groups, the closest oxygens to the nickel other than the four we expect are $\pu{4.4 Å}$ from the nickel. They are a long way in terms of angle away from the $z$ axis of the nickel. I think it is safe to say that they are not binding to the nickel. Here is a picture of the nickel complex. (D.V.Soldatov, A.T.Henegouwen, G.D.Enright, C.I.Ratcliffe, J.A.Ripmeester, Inorganic Chemistry, 2001, 40, 1626.) 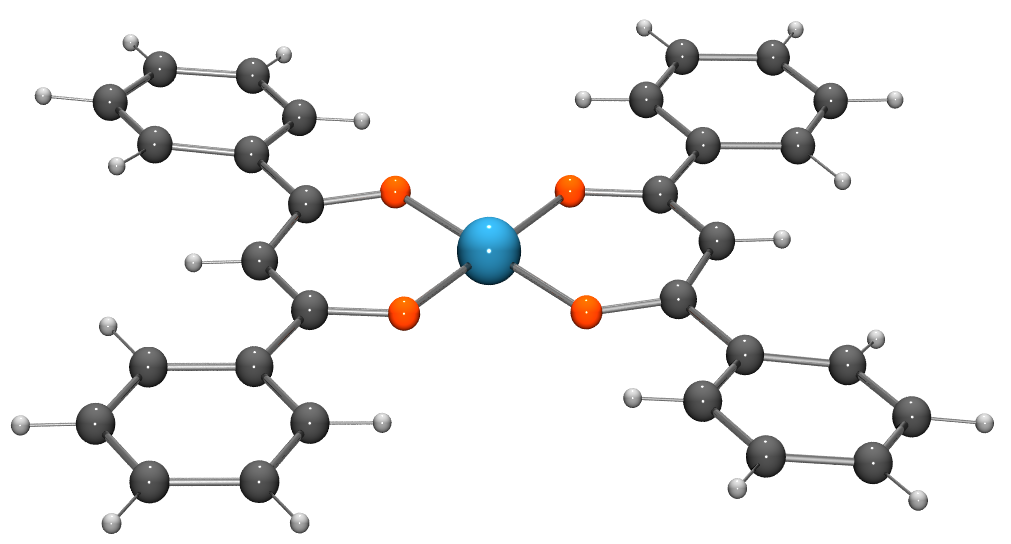 Just in case anyone is not sure it is very much a square planar complex.

But if you look at the crystallographic literature you will see G.J.Bullen, R.Mason, P.Pauling, Inorganic Chemistry, 1965, 4, 456. Here is the answer: what happens is that the nickel acac complex forms a trimer and the bridging oxygens make all three nickels have an octahedral environment. The CCDC code is ACACNI01 for the best determination which was M.B.Hursthouse, M.A.Laffey, P.T.Moore, D.B.New, P.R.Raithby, P.Thornton, Dalton, 1982, 307. 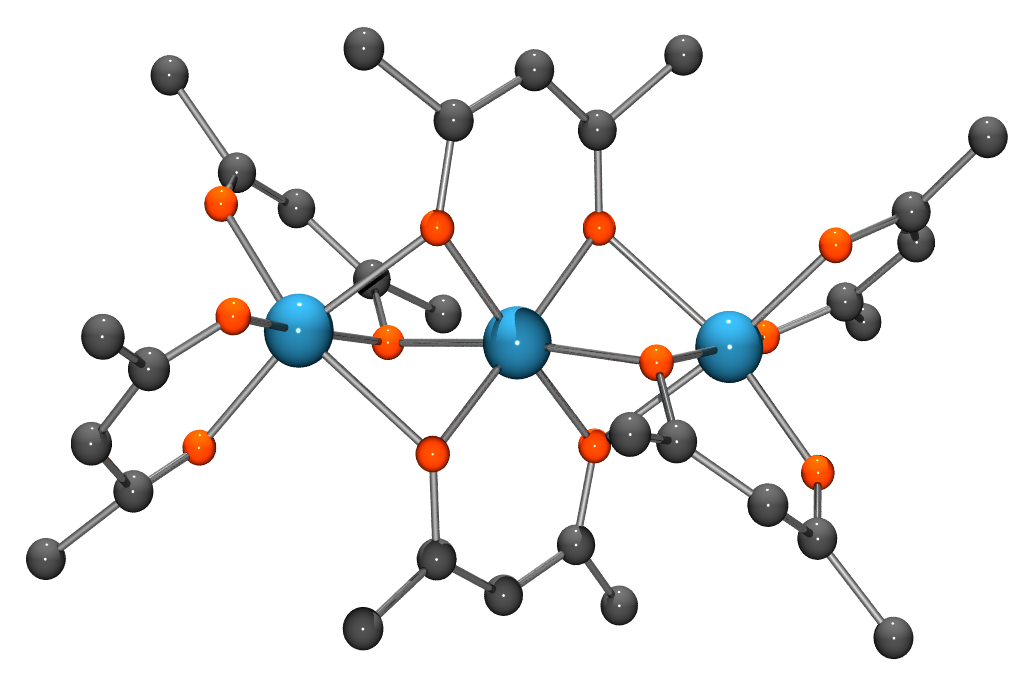 By the way one of the lectures I had as an undergrad mentioned this problem of waters adding to the coordination sphere or oligomers forming, I think it was in a lecture by David Goodgame.

While I have never seen a 4-coordinate nickel bis-acac complex which is anything but square planar, if you look at the coordination chemistry of a related phosphorus(V) ligand (dithioimidodiphosphinate) you can see both tetrahedral and square planar nickels. 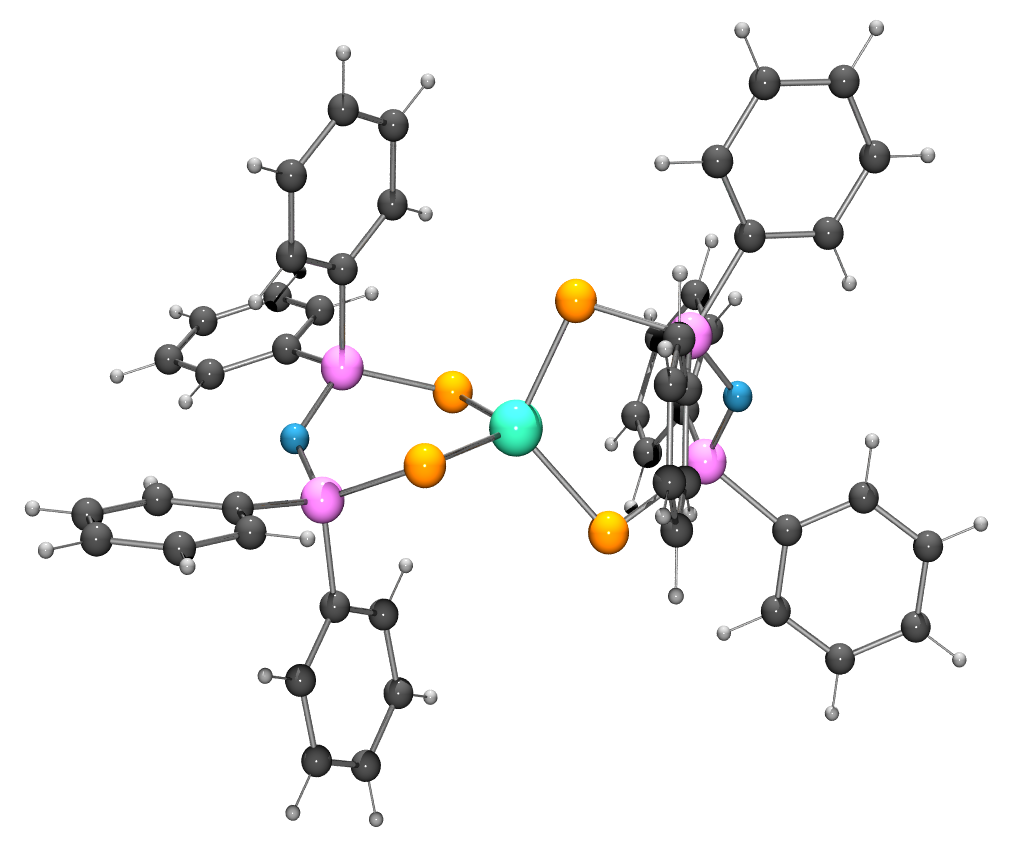 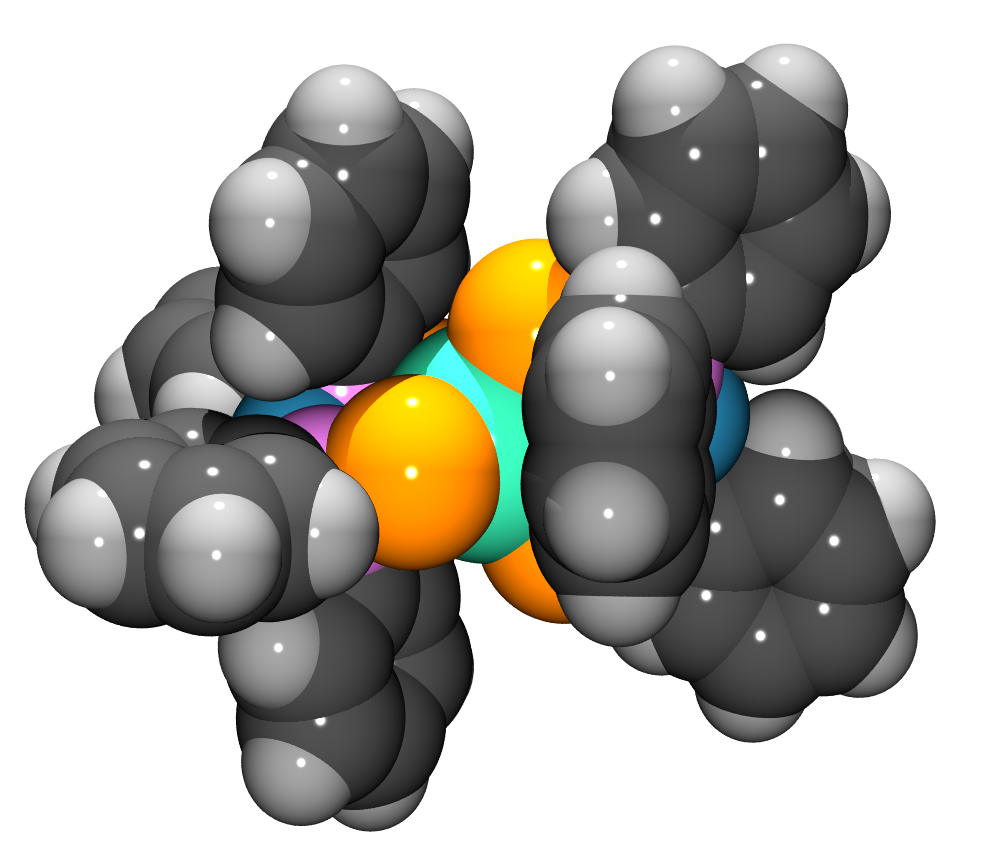 Not the answer you're looking for? Browse other questions tagged bond coordination-compounds molecular-orbital-theory molecular-structure crystal-field-theory or ask your own question.

3
Predicting molecular geometry from a formula
4
What accounts for the high spin state of the complex Tris(acetylacetonato)iron(III)?
1
Geometry of tetrabromidomanganate(II)
6
Coordination geometry: why is of Cu(acac)2 square planar?
13
Are carbocations necessarily sp2 hybridized and trigonal planar?
24
Solutions of Group 1 and Group 2 metals in Ammonia