Computed partial charges for protonated amine: discrepencies between Gasteiger and other methods

I would expect the computed partial chage on the amine to be positive, due to its protonation state.

When using Gasteiger charges calculator, it is affected a positive charge of 0.2422.

However, when using more sophisticated methods (AtomicChargCalculator or Antechamber's AM1-BCC implementation) it is affected a negative charge (-0.649), in these results for example.

It seems the charges computed for the other atoms are roughly similar, as shown in this graph (x-axis: AtomicChargCalculator charge, y-axis: Gasteiger) 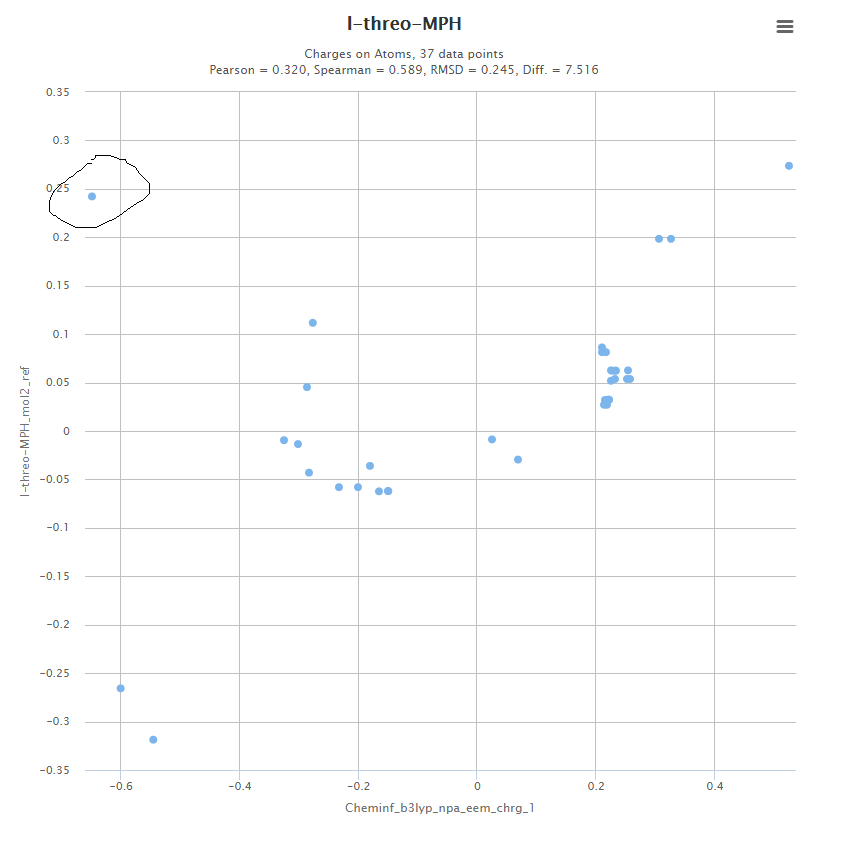 Does this amine really have a negative partial charge ? Why the discrepency ? Is there something I am missing ?

Typically, one wants 'accurate' partial charge models, for some definition of 'accurate' - but what that means can vary considerably. I explained some of this in a related question.

I think you have two parts to your question:

1) Why does Gasteiger give a different answer than AM1-BCC and EEM?

This one is easy. The Gasteiger model uses the molecular connection table (i.e., the valence bond diagram) and thus considers the initial formal charge on the nitrogen. AM1-BCC begins with a quantum calculation, and EEM is attempting to approximate a quantum calculation. You can't specify a formal charge on an atom to quantum mechanics -- the best you can do is express that the molecule is a cation and let the electrons go wherever.

2) Why do AM1-BCC and EEM methods give a negative charge to the nitrogen?

This is less clear to me, but consider that most of these models are attempting to fit point charges at an atomic center to best fit the electrostatic potential on the molecular van der Waals surface. In this molecule, the nitrogen is buried beneath four bonds - two to external hydrogen atoms that are assuredly positive partial charges.

There's ample literature that assigning the point charge to such a buried atom is very difficult because the nitrogen doesn't really have exposed VdW surface.

I haven't taken much time to look at other charge models, but I can tell you that the N+ in your structure does have a more positive charge than the corresponding neutral N when you strip off the extra proton (i.e, B3LYP RESP gives -0.194 for NH2+ and -0.755 for NH).

That's a very quick, rough calculation, but it should indicate that relative partial charges are often better considerations. In other words, this nitrogen is more positively charged than the neutral analogue.

Not the answer you're looking for? Browse other questions tagged computational-chemistry formal-charge or ask your own question.