Understanding sodium hydroxide drain cleaner's exothermic dissolution of aluminum; does the aluminum need to be oxidized before it dissolves?

I'm not a chemist but I remember that the standard HF/nitric silicon etch used in micro-fabrication supposedly worked in two steps; the HF would dissolve the thin SiO2 oxide layer on the silicon surface, exposing silicon atoms, and the nitric acid would then re-oxidize the bare silicon, allowing the HF to then dissolve it.

Or at least that's how it was explained to me.

Despite being challenged here, Wikipedia explains that the aluminum bits in sodium hydroxide-based drain cleaner are included to produce heat via exothermic liberation of hydrogen gas so that the heat can loosen some of the clogging materials. The article provides the following two steps.

Is what is happening similar to my understanding of the HF/nitric etch of silicon; it is the oxidized aluminum that is removed by the solution, and only because it happens to also oxidize the freshly exposed aluminum metal that the oxide is removed?

Snapshot of some drain cleaner with aluminum bits 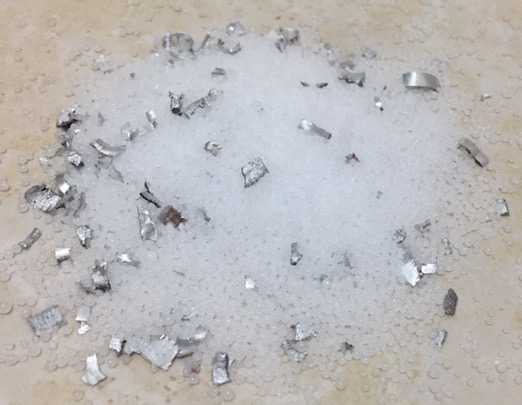 If you want to understand the reaction of $\ce{NaOH}$ on Aluminium, you may describe it this way. First, the aluminium reacts spontaneously with water, like sodium or calcium, producing gaseous Hydrogen $\ce{H2}$ and an metallic oxide or hydroxide. With sodium or calcium, the hydroxide produced by this reaction quits the metal surface, and get dissolved, leaving a fresh surface of metal ready to react with more water. The reaction with sodium is:

With aluminium, it is not the case. The reaction is:

But the aluminium oxide is not soluble into water and it makes a waterproof layer on the surface of the metal, which prevents further contact between the metal and water. So the reaction stops, due to this protecting effect of $\ce{Al2O3}$.

There are two ways of allowing the reaction to continue:

The $\ce{Al2O3}$ layer cannot adhere on the surface of this alloy Al-Hg. So the reaction with water continues as long as there is some mercury atoms left on the metallic surface.

So, to go back to @Uhoh's question, it is not $\ce{NaOH}$ that acts on Aluminium. It is water. The action of $\ce{NaOH}$ is to remove the oxide layer.

Not the answer you're looking for? Browse other questions tagged inorganic-chemistry acid-base everyday-chemistry redox or ask your own question.

9
Why are acetic acid and sodium bicarbonate mixed to unblock a drain?
7
Why do diluted sulfuric acid and hydrogen peroxide etch copper only when chloride ions are present?
7
Is it known for sure that bases feel slippery because of the production of soap/surfactant?
2
Does aluminium foil have an odour/gas off?