From Chemistry of the Elements by Greenwood and Earnshaw [1, p. 833]: 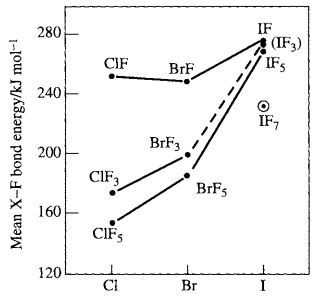 This shows the mean bond energy for $\ce{X-F}$, where $\ce{X}$ is a halogen. I have several questions:

Browse other questions tagged inorganic-chemistry bond halides or ask your own question.

6
Trend in the boiling point of the hydrogen halides
0
Reaction between 2 hydrogen halides
2
Reactivities: interhalogen compounds versus halogens
7
What type of bonding is there among d-block metals?
2
Why do Ca-Ca distances get shorter in ionic structures, as compared to the metal?
10
Geometry of the pentachloridoindate(III) anion
9
Explanation for bond lengths in trans-hexatriene
13
Explanation of the strength of phosphorus–oxygen bond
2
Why do PBr3 and PCl3 have larger bond angles than PH3?