Strength of Hydrogen Bond and Angle

This link has a short paragraph on the very first page, which says: "There are two useful criteria to evaluate the presence and the strength of a H-bond. The first is to look at the distance between the H and the A atom, which should be shorter than the sum of their Van der Waals radii. A second method suggests to evaluate the angle formed by X-H∙∙∙A, centered on the H atom: the closer this angle is to 180°, the stronger the H-bond is"

I wish to understand why the part in bold is true, that is, what is the angle dependence (qualitative or quantitative) of the strength of hydrogen bonds.

To add to the above discussion, in an introductory biology course at university, we were also given the following example - 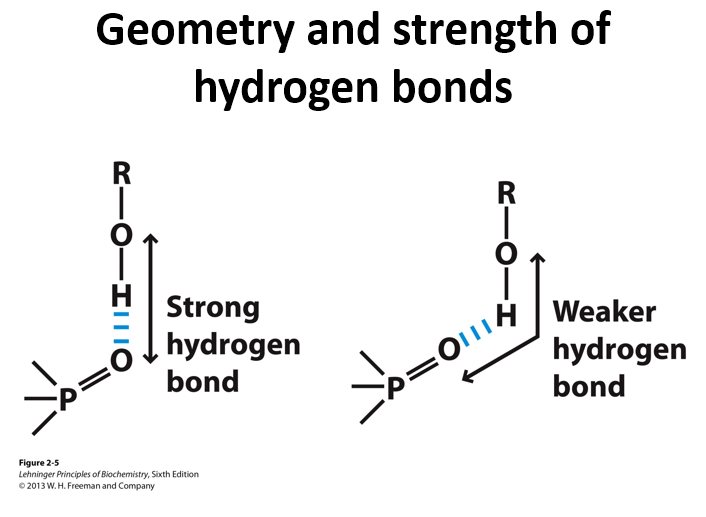 Well, once again, why is it so?

I did some research, didn't really find much, but came across an interesting paper that may be worth a read if anyone's really interested. Attaching it here!

If you analyze crystal structure data for short intermolecular distances between hydrogen atoms and potential acceptor atoms, you will find a distribution of these angles. The simplest explanation for this distribution is that there is a favorable interaction that is strongest for the most commonly observed angles. The fit between empirical data and computational results is fairly good, e.g. https://www.researchgate.net/publication/242862021_Distribution_of_hydrogen_bond_angles_in_molecular_crystals

If you treat hydrogen bonds as pure dipole-dipole interactions (Q-Y ... H-X), you expect the bond to be directional. After all, you maximize the interaction by close approach of the negative partial charge on the acceptor and the positive partial charge on the donor (i.e. the hydrogen atom in a polar bond). However, for this model the angular dependence should be symmetrical, i.e. there should be a similar decrease in bonds strength when you rotate the donor or the acceptor away from a colinear arrangement. The "rules" for hydrogen bonds say otherwise. It is more important that the angle at the hydrogen atom is maximal (Y ... H-X) than that the angle at the acceptor atom is maximal (Q-Y ... H).

All hydrogen bonds can be considered as incipient proton transfer reactions, and for strong hydrogen bonds, this reaction can be in a very advanced state.

There is some controversy whether the hydrogen bond has covalent character, and some question how to describe it theoretically (as a 3 center 4 electron bond?). There is, however, strong evidence from NMR that there is indeed a covalent contribution because nuclei couple in a through-bond fashion across hydrogen bonds (e.g. this review).

It has direct mechanical analogy.

If you pull a tree branch weakly, it remains more or less in its original direction. If you pull it strongly, it points towards you.

By other words, if an object is pulled by 2 non colinear forces, it has tendency to move itself to make them colinear, as the net force makes it to do so.

If one of forces is much weaker, the effect is weak.

I can't give you a definitive answer, since I've not studied this myself, but here is what my physical intiution says:

Let's use the following labels:

Oxygen atom in the same molecule as the hydrogen: O'

Oxygen atom with which the H is hydrogen bonding, i.e., the oxygen on the other molecule: O

As you know, a hydrogen bond forms because of the attraction between the partial positive charge on the H and partial negative charge on the O (it can also be an S or an N, but in your illustration it's an O). The greater the partial positive charge the O sees when interacting with the H, the stronger the bond. And the region around the H in the direction opposite O' (i.e., that furthest from O') is the most positive.

For an illustration of this, take a look at the diagram labeled "Water charge distribution" here: "http://www1.lsbu.ac.uk/water/water_molecule.html

Not the answer you're looking for? Browse other questions tagged bond hydrogen-bond or ask your own question.