When a Cl· atom is knocking a propane molecule, it may touch it at the end of the molecule, where there are 6 H atoms. Or it may touch it by the middle, where there are are only 2 H atoms. The probability that the collision happens with the end carbon is at least 3 times higher than the other possibility. So the secondary fragment issues from this collision may be more stable than the primary fragment. It is much less frequent. Statistically speaking, more 1-choropropane than 2-chloropropane will be produced.

The reason might be one of kinetic versus thermodynamic control. The actual halogenation step is stage 2 in this scheme: 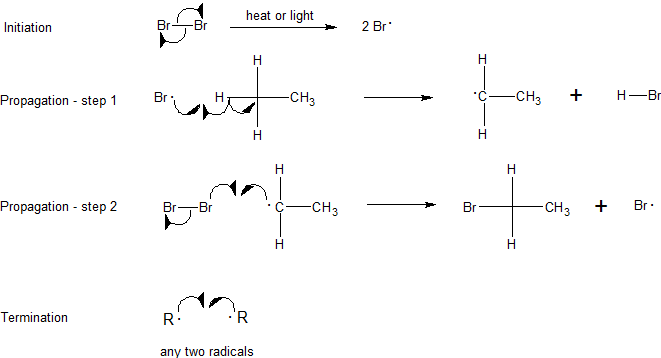 The 2-radical might well be more stable, but that doesn't mean that it will react faster than the 1-radical. If the reaction rate constant for the 1-radical with chlorine is much faster then the 1-chloro- product will predominate.

More likely, though is that it is that the 1-radical is formed in preference over the 2-radical in step 1. The halogen can attack at one of three positions, so statistically speaking you'd expect more 1-radical over 2-radical intermediates. If this species then reacts immediately in step 2 without rearrangement then you'd get a predominance of the 1-product formed. (Thanks to Karl for pointing this out).

1
Why is the reactivity of primary alkyl halides with nucleophiles (SN2 mechanism) greater than secondary and tertiary alkyl halides?
4
Why are tertiary alkyl halides obtained in higher yield than secondary or primary during free radical halogenation of alkanes?
8
What is the major product on chlorination of 2-methylbutane?
3
Are carbocation intermediates in equilibrium?
5
Rate of reaction of silver salts of carboxylic acids having different alkyl groups towards Hunsdiecker Reaction
2
The major product of 1,4-pentadiene NBS bromination
1
Alkane free radical halogenation
2
Can bridged and bridgehead positions be chlorinated using free radical mechanism?
4
False positive in lucas test for primary alcohol due to formation of tertiary carbocation by rearrangement?