How is NaBH4 able to reduce tertiary alkyl halides to alkane but LiAlH4 create an alkene?

When attacking tertiary alkyl halides, aren't both of them just supposed to follow $\mathrm{S_N2}$ and substitute the leaving group with Hydride ion? Apparently only $\ce{NaBH4}$ does it and $\ce{LiAlH4}$ causes an $\mathrm{E1}$ elimination resulting in an alkene. Why does that happen? $\ce{LiAlH4}$ does secondary and primary alkyl halides to alkanes, so why not tertiary as well? 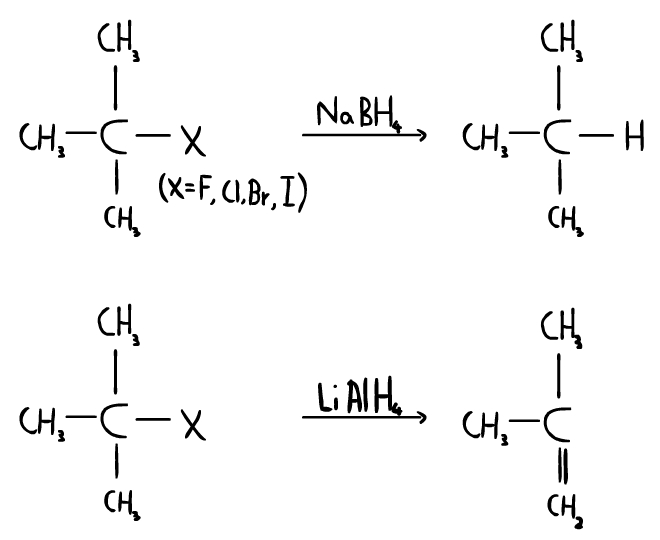 Browse other questions tagged organic-chemistry reaction-mechanism organic-reduction or ask your own question.

4
Elimination of tertiary alkyl halide with lithium aluminium hydride to give alkenes
0
What would be the major products of this reaction?

4
Why are tertiary alkyl halides obtained in higher yield than secondary or primary during free radical halogenation of alkanes?
20
Why does NaBH4 reduce double bonds conjugated to carbonyl groups, while LiAlH4 does not?
6
Why NaBH4 does not reduce carboxylic acid while LiAlH4 does?
3
Hofmann elimination
14
If SOCl2 reacts with alcohols via SNi, why doesn't POCl3?
2
Product of Williamson Synthesis
13
Why does LiAlH4 reduce the double bond of cinnamaldehyde, whereas NaBH4 does not?
7
NGP mechanism vs the simple carbocation mechanism